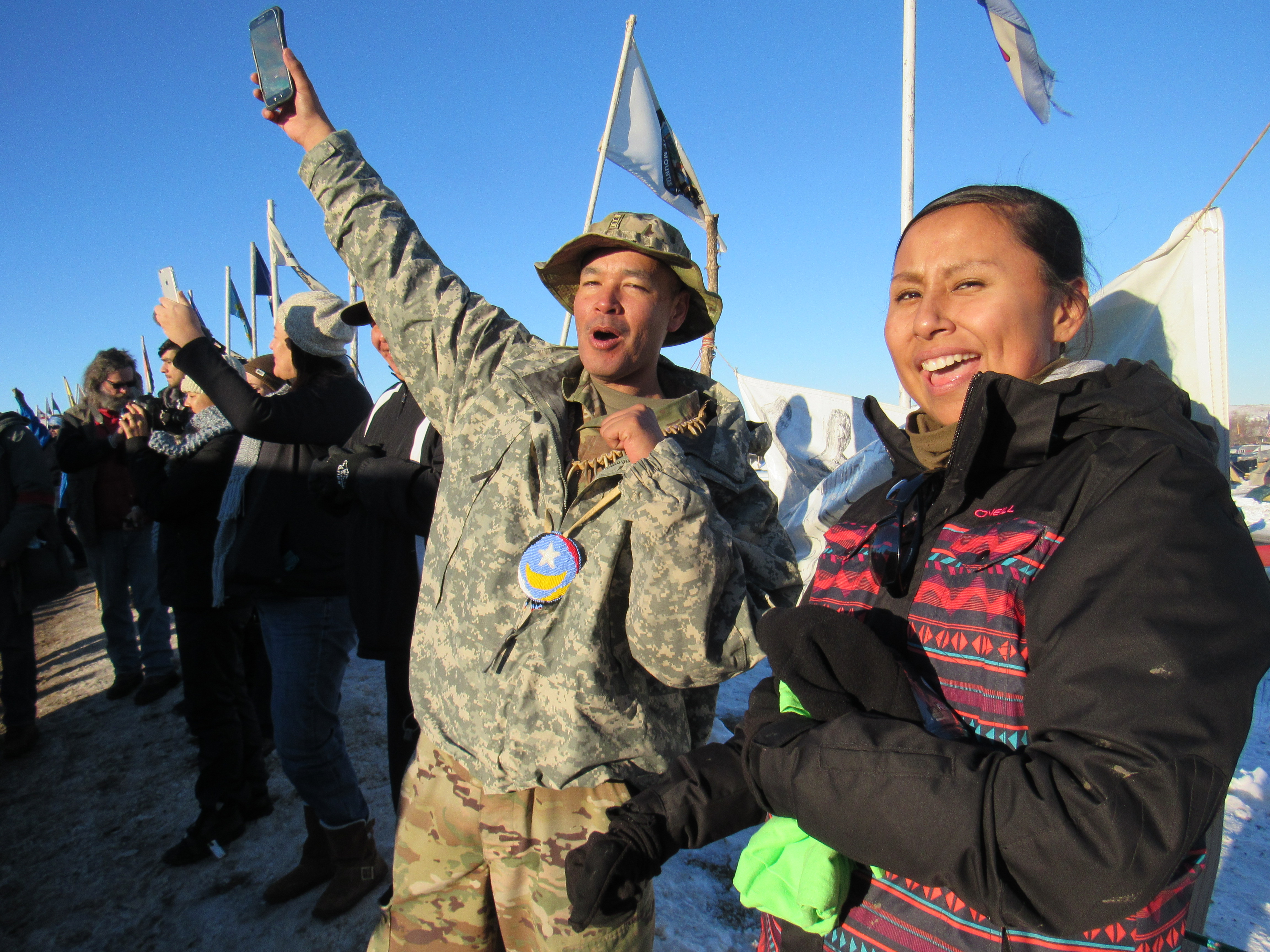 Opinion. Five years ago, the first weekend of December, I was at Standing Rock covering the resistance to the Dakota Access pipeline for Native News Online. Bolstered by some 2,000 veterans who arrived to show support, the crowd swelled to an estimated 10,000 over the weekend.

That Sunday was one of the most memorable days for me as an American Indian journalist.

It was a brilliant sunny day as veterans made their way to Cannon Ball, a small community on the Standing Rock Indian Reservation about six miles southeast of the Standing Rock main camp, Oceti Sakowin. The veterans held a large rally there standing in a circle, holding signs that read “Veterans Stand for Standing Rock.” One American Indian man held an American flag attached to a yellow pole. Next to him, a non-Native veteran held a flag that read “Veterans for People.” A large drone flew overhead, moving up and down around the circle, as speakers made their way in to address the crowd.

Among the speakers was then Rep. Tulsi Gabbard (D-HI), a veteran of the U.S. Army Reserve, who was embraced by the crowd as she spoke about the need to stop big oil and the harm that would be caused by the Dakota Access pipeline. Through the event, Standing Rock tribal leaders called for a peaceful, non-violent movement.

They wanted things to remain peaceful with the knowledge that veterans wanted to reopen the Backwater Bridge on Highway 1806 near the Oceti Sakown camp that law enforcement had barricaded a month earlier.

Even though they were told there was to be no violence, rumors spread that some veterans planned to remove this barricade. Dozens of members of the media, from the smallest local paper to national outlets to foreign press, were there to cover the impending march.

At the entrance into the camp, a line of vehicles stretched back as far as the eye could see. Immediately north of the camp entrance, the highway was closed as hundreds of people congregated there for the veterans’ march.

I took many photographs of the crowd attempting to capture history. There were Lakota on horseback weaving in and out of the crowd. I saw philosopher, political activist, and professor Cornel West surrounded by a small crowd of reporters, talking about American Indians and African Americans sharing a common history and the need to come together to support this cause.

Just then, I began to hear whispers among the reporters that the Obama administration would not grant the approval for the pipeline easement through the Missouri River.

Within minutes, horns were honking from the long line of cars waiting to enter the camp. A Native American man announced that the Standing Rock tribal officials had been notified that the pipeline easement had been halted.

In the distance, thousands of people roared with joy, a roar similar to that of a Friday night high school game after a touchdown.

An instantaneous parade broke out at the top of the hill, led by tribal men beating their drums and singing a victory song. Adults could be seen shedding tears of jubilation.

I remember thinking Indians seldom win, but today we did. One could feel the jubilation of thousands of American Indians. The celebration lasted hours with fireworks lighting up the dark sky.

History will record that the win was short-lived because six weeks later, Donald Trump was sworn in as president and reversed the Obama administration’s decision.

Five years later, I reflect back on the cold wintry weekend at Standing Rock where I slept in a pickup truck bundled in sleeping bags and blankets. Waking up in the truck and looking out into the stillness of the night to see smoke rise into the winter’s sky from fires among tents, campers and teepees will remain in my mind as long as I live.

Covering Indian Country as a Potawatomi man is gratifying and challenging. The challenges come in because of the constant need to fund the coverage. As publisher of Native News Online, I have come to understand the importance of the work of Native American journalists and the need to keep the fire going by raising money.

Reflecting on Standing Rock, I also realize the best journalism—the best Standing Rock articles—came from Indigenous writers who told stories through the lens of tens of thousands Native Americans from over 300 tribes who gathered there to fight against big oil.

During December, Native News Online is conducting its year-end campaign with a goal to raise $20,000 by year-end to fund our journalism. I write to appeal to you to become a donor—either a one-time donor or a recurring donor—who helps our Indigenous-led news organization be funded so we can continue to deliver the stories that need to be told.