Remembering Clyde Bellecourt: Making Sure We Had Money for a Meal on Our Way Home from Standing Rock 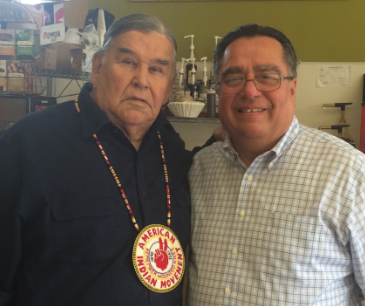 Opinion. It was a blustery Monday in North Dakota during the first week of December in 2016. Strong Great Plains winds pushed my body down the hill from the highway back into the Oceti Sakowin Camp at Standing Rock. Around noon, after covering a march with hundreds of veterans, word spread through the camp that highways were closed and everyone there had to stay until the blizzard ended. Frustration came over me because there was no internet and I could not post stories to Native News Online. I thought the rest of the day would be wasted.

My frustration was short-lived when I saw Clyde Bellecourt (White Earth Ojibwe), one of the cofounders of the American Indian Movement (AIM), sitting in the Michigan tent. I quickly got some hot soup for lunch and sat down next to Bellecourt. I asked if I could interview him, and he immediately agreed. Problem solved. Even with no internet, I could work because I knew Bellecourt was always full of insight and wisdom.

During our conversation, he told me—as Dennis Banks, another AIM cofounder had told me numerous times previously—he was worried that there were no leaders to pick up the fight after the original AIM leaders would pass away.

“My fears are gone since I arrived here at Standing Rock,” said Bellecourt, who led the fight along with Banks and other AIM leaders at Wounded Knee in 1973. “These groups of young people showed me that they are ready to take up the fight for our people.”

Bellecourt recounted to me that there were never more than 200 people at Wounded Knee during the 1973 occupation when I asked him to compare Wounded Knee to Standing Rock.

Bellecourt then told me about his autobiography, The Thunder Before the Storm. He told me he would get me a copy. A man of his word, he had a mutual friend send a signed copy to me about two months later.

I first met Bellecourt in 1996 when he came to Grand Rapids at my invitation to be the keynote speaker at a symposium on American Indian youth. Prior to the symposium, he sent some flyers for handouts. Some of the information on the flyer said youth in families that sat down to eat together for dinner had less juvenile delinquency than families that did not eat together. In essence, the message was children get their self-esteem when families eat together and bond. It was a lesson that I implemented in my own family.

At the symposium I discovered Bellecourt was quite the orator. He lived up to his Anishinaabe Ojibwe name, Nee-gon-we-way-we-dun, which means “Thunder Before the Storm.”

I learned a whole lot about AIM history during his stay in Grand Rapids. I remember him telling me about how in the early days of AIM, the founders had to learn the Indian ways. He explained because so many Native Americans were products of cities, they had not been taught the Indian ways.

Over the years, Bellecourt would graciously discuss any Native American issue with me when I called for a comment for a Native News Online story.

In the summer of 2015, I was in his home city of Minneapolis for a meeting. After my meeting, I called him from a coffee house to see if he had time to meet. He dropped what he was doing and arrived about 10 minutes later. He gave me a tour of Native organizations he helped establish and took me to the American Indian Movement Interpretive Center that contains walls of photographs of AIM history, many that included him.

Bellecourt, along with Dennis Banks and other AIM leaders, left a mark on contemporary Indian Country fighting against social injustices.

After he passed away on Tuesday, I began to reflect on his life and now his death.

There is one gesture I will never forget. After leaving Standing Rock for our trip back to Michigan, one of the men who was in our vehicle announced Clyde gave him some money so we could have dinner courtesy of him.

We stopped at a restaurant in Fargo, N.D. and ate a nice hot meal courtesy of Clyde Bellecourt. He always did things the Indian way.

He will be buried on the White Earth Reservation in Minnesota with a traditional ceremony in the Indian way.