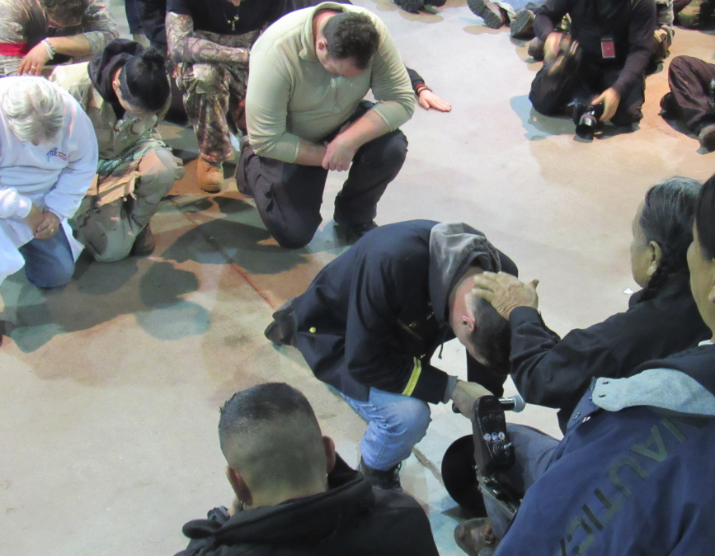 On the first weekend of December 2016, thousands of veterans arrived at Standing Rock to offer their support to water protectors who camped there for several months to resist the Dakota Access oil pipeline.

In meetings with the veterans, tribal officials repeatedly reminded the veterans the Standing Rock resistance movement was a peaceful and sacred movement; one that was about prayer for the oil company to do the right thing.

A Vietnam veteran whispered to me, “we could have prayed at home.”

That Sunday, a rumor began circulating through the camps that some of the veterans wanted to reopen the Backwater Bridge on Highway 1806 where law enforcement put up concrete barriers there two months earlier. The rumor was the veterans would assemble at the main entrance to the largest Standing Rock camp and march the half mile to physically move the concrete barriers to reopen the bridge.

At the main entrance into the camp, a line of vehicles stretched back as far as the eye could see. Immediately north of the camp entrance the highway was closed. Over a thousand people congregated there for the veterans’ march. Lakota youth on horseback weaved in and out of the crowd. Dozens of members of the media were present, many foreign correspondents, to cover the impending action. No one really knew what was going to happen.

I took many photographs of the crowd attempting to capture the moment. Across from the main entrance was Black professor Cornel West surrounded by a small crowd of reporters listening to why he had come and how American Indians and Black Americans often share common causes. Just then, I began to hear whispers among the reporters that the Obama administration would not grant the approval for the pipeline easement through the Missouri River. I asked one of the reporters if I heard her correctly. She said yes—she just got word from her New York office.

The announcement spread quickly through the camps. People shouted with joy. Some cried. I remember thinking, we Native people seldom get victories from the government.

The tension about whether the veterans would remove the barriers defused suddenly. People marched back to the main camp. The atmosphere turned to a festive carnival-like celebration with impromptu speeches, drumming, singing and whooping for joy.

The next day, over a thousand veterans gathered at the Prairie Knights Casino & Resort Pavilion, a 34,000-square-foot event center, for a seemingly anti-climatic rally.

Tribal ceremony leaders were on-hand to thank the veterans for coming and talk about the deep commitment Native people have to preservation of Mother Earth. Speakers talked about the importance of stopping pipelines.

On this day, Wes Clark, Jr., the son of retired U.S. Army general and former supreme commander at NATO Wesley Clark Sr., led a small group of veterans who lined up and then knelt in front of Chief Leonard Crow Dog, a traditional medicine man and Lakota spiritual leader, who sat in a wheelchair with a stoic look on his face.

Clark begged the tribal leaders for forgiveness for the mistreatment by the United States against American Indians throughout American history.

"Many of us, me particularly, are from the units that have hurt you over many years. We came. We fought you. We took your land. We signed treaties that we broke. We stole minerals from your sacred hills…We didn’t respect you; we polluted your Earth, we’ve hurt you in so many ways but we’ve come to say we are sorry. We are at your service and we beg for your forgiveness,” stated a repentant Clark.

As Clark delivered his apology, outbreaks of Lakota whoops and singing occurred.

"World peace! World peace," he said. "We are a Lakota sovereign nation. We were the nation, and we are still a nation," he continued, as many of the kneeling vets, and many onlookers, wiped tears from their eyes. “We have a language to speak. We have preserved the caretaker position. We do not own the land. The land owns us."

This forgiveness ceremony came back to last week as we remembered Chief Crow Dog, a fourth-generation medicine man who began his journey to the spirit world a week ago on Sunday.

To those of us who remain, the great Chief Crow Dog’s call for world peace should be our aspiration in our interpersonal relationships, throughout our tribal communities and beyond. It should be our wonderful goal.