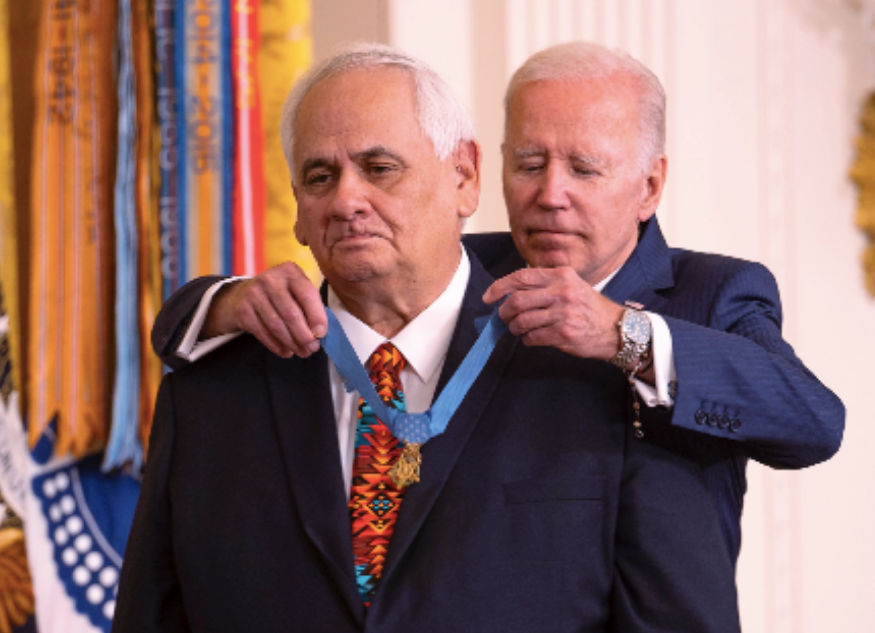 Guest Opinion. Dwight Birdwell is an American hero and Cherokee Nation patriot. I deeply respect the man for his service to our tribal nation and to our country. Now he is the most recent recipient of the Congressional Medal of Honor, the United States’ most prestigious award for military veterans who showed bravery in combat at the risk of life, above and beyond the call of duty.

Originally from Adair County, Mr. Birdwell is one of only a handful of Cherokees throughout history to receive the Medal of Honor. He was awarded the Purple Heart and two Silver Star medals for extraordinary heroism in multiple battles. I was proud to accompany Mr. Birdwell at the White House when he and three other U.S. Army soldiers received this long overdue honor by the President for their deeds during the Vietnam War.

Mr. Birdwell’s heroic deeds as recognized by the U.S. Army:

“He was assigned to Troop C, 3rd Squadron, 4th Cavalry, 25th Infantry Division. He received the first Silver Star for heroism on Jan. 31, 1968, when his unit raced to defend Tan Son Nhut Air Base, which was under attack during the Tet Offensive. Cavalry Troop C was the first American ground unit from outside the airbase to respond to the attack. When Birdwell's tank commander was seriously wounded, Birdwell took command and placed intense fire on the enemy until his ammunition was expended. He then retrieved an M-60 machine gun and continued firing at the enemy until the weapon was damaged by enemy fire, which also wounded Birdwell. With disregard for his own safety, he ran through a hail of enemy fire to get more ammunition for his men from other damaged vehicles.

On the night of July 4, 1968, he again risked his life to rescue more Americans, some of them wounded, who were stranded in a battle zone in an enemy-occupied village. Seeing a damaged Army personnel carrier, he exposed himself to heavy enemy fire while loading all of the wounded and evacuating them to safety. He then went back into the village to rescue more Americans, for which he was awarded his second Silver Star for bravery.”

It sounds like a Hollywood script, not the deeds of a humble man from Bell who expected no commendation. Without doubt, he is a true American hero, one that put his own life at risk without hesitation – more than once – to protect fellow Americans.

Mr. Birdwell went on to graduate from Northeastern State University and later the OU College of Law. He served as a member and Chief Justice of the Cherokee Nation Supreme Court from 1987 to 1999. He helped lay the foundation of our tribe’s modern court system. He also practiced law in the Oklahoma City area for more than 40 years, and he remains a well-respected community leader.

That’s why last year I wrote a letter of support to Secretary of Defense Lloyd J. Austin III and Oklahoma’s state and federal leaders advocating for Mr. Birdwell to receive the Medal of Honor. We advocated with the nation’s highest military leadership for this honor because this was simply the proper and overdue recognition for his valiant actions during the Vietnam War. We joined a chorus of individuals from across the country in support of this honor.

Mr. Birdwell never left a man behind during his storied war career. He fought the enemy, saved his fellow soldiers and embodied the Cherokee ethos of honorable military service. We are tremendously proud of Dwight Birdwell, as a fellow Cherokee. He represents thousands of Cherokees over the generations who have proudly served our country to protect our freedoms.