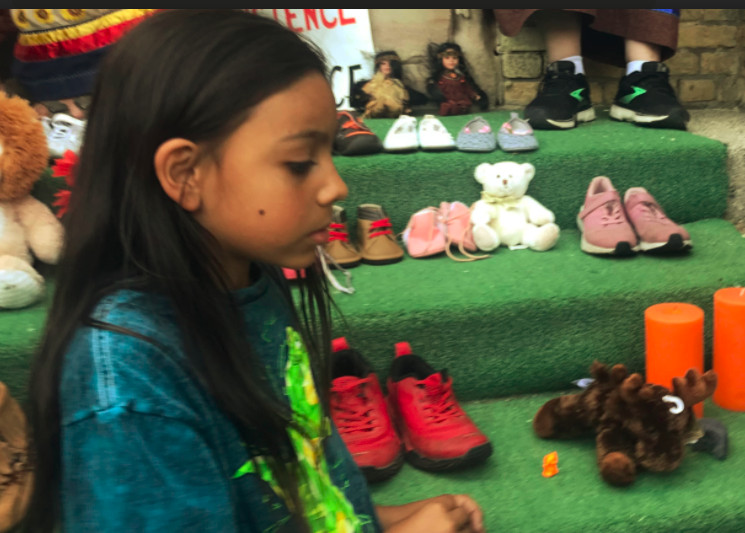 The federal government has always dealt with American Indian from a paternalistic and colonial stance. After the failures to remove American Indians through disease and war, the government sought to assimilate Native people. Children were forcibly removed from their homes and placed in boarding schools. An ethos adopted by Capt. Richard  Henry Pratt to “kill the Indian; save the man” was used to strip Indian children of their culture and “Americanize” them.

As part of a comprehensive study, Indian boarding schools were investigated during the 1920s through a study commissioned by Interior Secretary Hubert Work in 1926. Secretary Work selected Lewis Meriam, of the Institute 2 for Government Research (now the Brookings Institution) to supervise a survey of conditions on Indian reservations in 26 states. Funded by the Rockefeller Foundation, the study looked into conditions of agriculture, sociology, law, health and education. After two years of field work, in 1928 the findings were compiled and released in a 847-page tome called “The Problem of Indian Administration,” also known as the “The Meriam Report.”

Under the education section, the report revealed Indian boarding schools were part of a broken system in all areas. It reported poor living conditions, poor health care, inadequate food supplies and lack of family development for American Indian children. The report also lacked accurate census data regarding the number children who were part of the system. Teachers were underpaid and oftentimes unqualified to teach.

A portion of the report reads:

“The survey staff finds itself obliged to say frankly and unequivocally that the provisions for the care of the Indian children in boarding schools are grossly inadequate. The outstanding deficiency is in the diet furnished the Indian children, many of whom are below normal health. The diet is deficient in quantity, quality, and variety. The effort has been made to feed the children on a per capita of eleven cents a day, plus can be produced on the school farm, including the dairy, At few, very few, schools, the farm and the dairy are sufficiently productive to be a highly important factor in raising the standard of the diet, but even at the best schools these sources do not fully meet the requirements for the health and development of the children.”

The report described substandard old buildings often used long after the buildings should have been closed and torn down. In many cases, buildings were fire-risks with poor boiler systems. The dormitories were overcrowded with below-standard sanitation.

“The Meriam Report” was released 93 years ago, just prior to the Great Depression. One can only imagine conditions grew worse at the schools as the entire nation suffered from dire economic conditions. Even after the release of “The Meriam Report,” the forced removal of Native American children continued for decades.

The damage of the broken Indian boarding school system lingers today in tribal communities through alcoholism and dysfunctional families.

Weeks after the discovery of 215 remains of school children at the Kamloops Industrial Residential School in Canada, a renewed interest in the Indian boarding schools surfaced. The discovery led Interior Secretary Deb Haaland to establish a Federal Indian Boarding School Initiative. The initiative will include an investigation to identify past boarding schools, the location of known and possible burial sites, and the identities and tribal affiliations of the children who were taken there.

Soon after Sec. Haaland established the initiative, Navajo Nation President Jonathan Nez said what many of us know to be true through our life experiences about the impact of the American colonization of Indian land and the assault on its people.

“As Navajo people, we all have parents, grandparents, and other elders who were subjected to boarding schools and that has contributed to many of the modern-day monsters in our society such as suicide, substance abuse and addiction, violence in our homes and communities, the physical and mental health of our people, and much more. Our people were forcefully removed from their homes and families, placed into the boarding school system, and stripped of their identity as Navajo people to assimilate them. Some were abused physically, mentally, and sexually, and sadly, many had their lives taken. This troubling history deserves more attention.”

The Federal Indian Boarding School Initiative will result in a written report on the investigation to Sec. Haaland by April 1, 2022.

This new initiative, under the Department of the Interior, should go beyond what the “The Meriam Report” accomplished. It should aim to expose the truth about the mistreatment, oppression, abuse and killing of Indian children. It is a first step on a long journey towards healing centuries-old wounds from the assault that has wrought chaos to Native people, the righteous and first inhabitants of this land.