Indigenous Erasure Places Natives in the Path of Pandemic Hardship 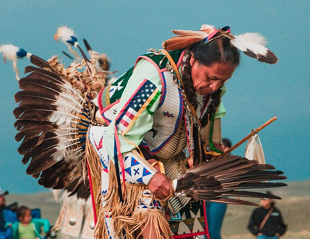 The Covid-19 pandemic has overwhelmed minority communities chronically neglected by the healthcare system. The incalculable impact on Alaska Native and American Indian (AN/AI) communities exemplifies all too well the consequences of Indigenous erasure on pandemic resiliency and recovery.

Alaska Natives and American Indians are three and half times more likely to contract Covid-19 than White communities— and nearly twice as likely to die from their Covid infection.  The Center for Disease Control (CDC) released this staggering statistic in their Covid-19 morality report for the first stretch of the pandemic (January- June 2020).

Another report  CDC report from Montana, shows that AN/AI persons remained at twice the risk of Covid infection, dying at a rate almost four times that of white individuals. A year’s worth of quarantining and safety measures still had not protected Indigenous communities from the pandemic.

A deeper look into that arduous year revealed that health disparities persisted for Native Hawaiian and Pacific Islanders, Alaska Natives, and American Indians long after other ethnic groups declined in numbers. Interestingly— this pattern appeared only for individuals less than 25 years old. The previous CDC report found higher mortality rates for indigenous people in all age groups except the oldest (80+). These findings suggest selective inequity for AN/AI communities within the larger community that puts them at greater health risk.

Past pandemics also show health disparities for indigenous communities compared to their white counterparts. One such example is the 1918 Spanish flu, in which 80 percent of Alaska’s deaths came from their indigenous population. While healthcare mechanisms are in place for AN/AI peoples, like the Indian Health Service, these organizations receive significantly less funding than other government health programs. Apathy and irreverence towards indigenous health occurs at the most basic levels— collecting patient information.

Public health researchers and legislators use data on patient age, sex, ethnicity, and other factors to organize health programs.  Many challenges persist in efforts to obtain timely, accurate surveillance and reporting of Covid-19 among American Indians and Alaska Natives. The Urban Indian Health Institute analyzed Covid-19 data from all 50 states and graded them on reporting racial information. Unfortunately, not all states included an AN/ AI option despite CDC data clearly outlining indigenous people as an at-risk population. Of the confirmed Covid-19 cases reported to the CDC, only slightly over half the states had complete racial information included. However, even prior to Covid-19 , racial misclassification at the local level on administrative data for public health surveillance often led to underreporting of the AI/AN population.  Rolling out an appropriate and effective pandemic response is impossible when healthcare bodies neglect to obtain crucial information for public health.

Several hurdles stand in the way of AN/AI individuals universally and consistently accessing quality healthcare. For instance, many Indigenous people live in rural and remote communities, having to drive several hours to reach a hospital. Lack of healthcare access alongside impoverished living conditions depletes the quality of life for these communities. Indigenous people suffer diabetes, obesity, heart disease, and health complications from smoking at higher rates than white people. Even with remote doctor visits, the problem remains one amongst many for meeting basic human needs.

Some AN/AI individuals reside in urban areas, while others may live in multigenerational households that may lack common resources like running water and electricity. Tight living quarters and poor conditions are prime for the rapid spread of viruses, leading to a significant loss of tribal elders  throughout indigenous communities.

Of the 1,134 Indigenous deaths reported in the initial 2020 CDC report, over half belonged to men. Conditions like diabetes and heart disease that plague indigenous peoples also occur more often in men than women. Both sex and race impact a person’s health, and research suggests this does not play in favor of male minorities. In truth, if men live sicker—then indigenous men live chronically ill. These men are more vulnerable to COVID-19 because they are fighting at a disadvantage hundreds of years in the making, with scarcely any resources to overcome it.

The CDC also showed that higher mortality rates occur in younger AN/AI individuals (<60 years old) compared to White persons. The highest disparity in mortality appeared between the ages of 20-49—working age. These are individuals going out into the community, more exposed to infection risk than housebound elders. The health advantage afforded to white individuals because of their age likely does not translate to indigenous people because of gross disparities in access to quality medical care (and living conditions). Privilege offers a layer of protection against the pandemic, while AN/AI communities remain vulnerable to the worst of the virus.

Covid-19 unapologetically exposed many of the inequities leveled against Indigenous communities. The pandemic also resulted in devastating losses to businesses like casinos, operated by more than 40 percent of tribes.  As tribal communities enter the recovery phase, efforts will need to focus on long-term consequences of grief, anxiety and stress from mounting financial hardships and emotional losses.—An opportunity is before us to prioritize increasing access to culturally competent healthcare and resources for indigenous men and their families.. Diligent collection of patient data and development of intuitive public health programs are crucial to protecting the health of at-risk communities.

Caleigh Findley is a fourth-year doctoral student in pharmacology and neuroscience. After graduation, she hopes to pursue a career in health communications. She is currently a graduate Intern at Men’s Health Network

Men’s Health Network (MHN) is an international non-profit organization whose mission is to reach men, boys, and their families where they live, work, play, and pray with health awareness messages and tools, screening programs, educational materials, advocacy opportunities, and patient navigation.

For information on MHN's programs and activities, visit them at MensHealthNetwork.org, on Twitter (@MensHlthNetwork), and on Facebook (facebook.com/menshealthnetwork), or call 202-543-6461 ext. 101.

Donate
Free Newsletter
About The Author
Author: Caleigh FindleyEmail: This email address is being protected from spambots. You need JavaScript enabled to view it.