In All This Darkness, Taking Back Our Stolen Children Can Offer Hope 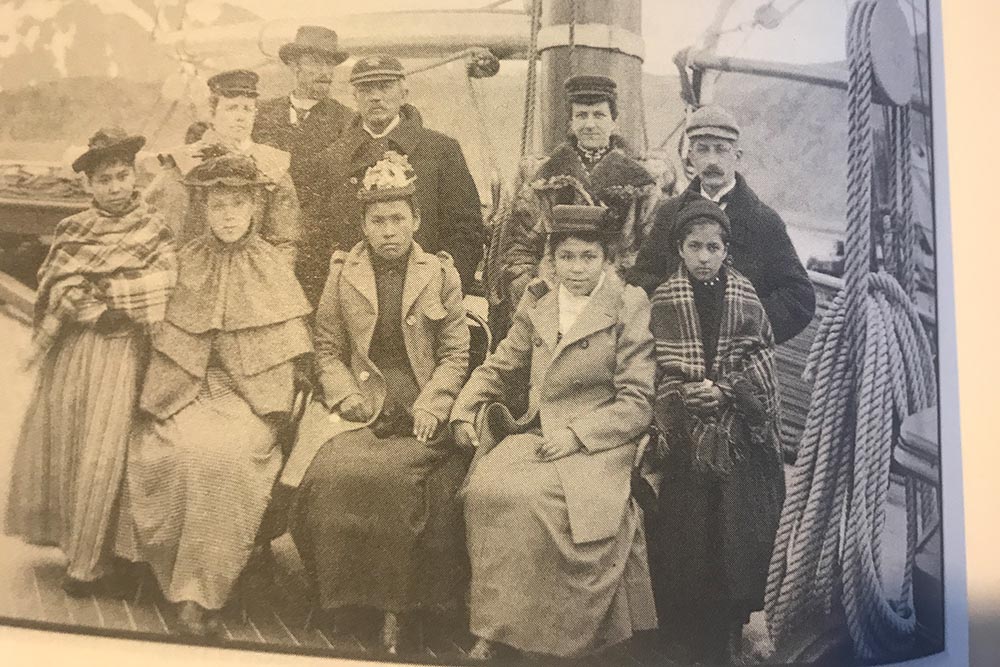 My name is Lauren Peters. I am enrolled with the Agdaagux Tribe in the Unangax Nation in the land and waters that are now considered the Aleutian and Priblof Islands of Alaska. I am a first year PhD student in Native American Studies at UC Davis. I have a designated emphasis in Human Rights concentrating on Human Rights of the Dead. That emphasis is to reflect my work finding and documenting Alaska Native children who died and are buried in Native American boarding school cemeteries. One of which is my great Aunt Sophia from St. Paul Island who is buried at Carlisle Indian Industrial School in Pennsylvania. We are rematriating her home to St. Paul Island this summer.

The Pribilof Islands in the middle of the Bering Sea are called the seal islands because they are the largest fur seal rookery in the world. In the 1700s, the Russians took Unangax away from their Aleutian Island homes and brought them there to club seals for their pelts. In 1867, two years after the Emancipation Proclamation freed the Southern Blacks, the U.S. government bought these two islands full of captive workers. Forced to harvest seal fur, they were called “Slaves of the Harvest.” It was set up like a company town, but the Unangax occupants were not U.S. citizens. They were wards of the state and would remain that way until 1983.

Men worked harvesting fur seals, women’s jobs were to take care of their sealing husbands, girls would marry into the sealing industry, and boys grew up to be sealers. Widows and orphaned girls were a drag on the sealing profit. In the late 1880s, a way to offload these orphaned girls reared its head in the form of Native American boarding schools.

Sophia and Irene are my second great aunts. After they were orphaned on St. Paul Island in 1895, they were taken by the Methodist missionaries, John and Mary Tuck, aboard the Bear to the Jesse Lee Home on Unalaska Island. In 1900, Irene died in the Great Sickness that was brought on by the Yukon Gold Rush and Sophia was sent 4,000 miles by boat and train to the Carlisle Indian School. Carlisle was the first U.S. government-sponsored Indian boarding school. It was headed by Lieutenant Henry Pratt whose motto was “Kill the Indian and Save the Man.”

Pratt’s contemporary on the west coast and Alaska was the Reverend Sheldon Jackson. Pratt and Jackson had a rich past. Jackson’s sister was the wife of the Reverend George Norcross, pastor of Pratt’s and Jackson’s home church and officiant at Carlisle, all of whom had similar goals for Native people. Jackson divided Alaska into Church denominations with the Methodists gaining rights to the Aleutian Islands, the Baptists set up an orphanage on Kodiak Island, and the Presbyterians accessed Southeast Alaska even though most people of these areas already belonged to the Russian Orthodox Church. Each area had its own boarding school made up mostly of orphans and stolen children.

These schools were lucrative models. They made money by government and church sponsorship, using the free labor of students, and sending children into “outing” programs, which was field labor and domestic work in a failed attempt to assimilate Native people into Eurocentric culture. It was on one of these “outings” that Sophia became sick and died in 1906.

Like many of her classmates, Sophia died of TB and was buried in the original Carlisle graveyard. Then in 1927, about 10 years after the school closed, she and the others were moved to her current location next to a busy street near the barracks' entrance. Some of the children went missing in the process.

Article 10 of the 2007 UN Declaration of the Rights of Indigenous People reads, “Indigenous peoples shall not be forcibly removed from their lands or territories. No relocation shall take place without the free, prior and informed consent of the Indigenous peoples concerned and after agreement on just and fair compensation and, where possible, with the option of return.”

The Army is paying for the reinterment and travel costs for my son and I this summer.  She will be the first of many to return home to Alaska. I would guess that the costs today far outweigh the financial burden of two small girls on St. Paul Island 126 years ago.

The process to have your child returned is simple and straightforward. Tribes and families that would like to track their members who may have attended Carlisle can be found on an excellent database which is maintained by Dickinson College. The database can be searched by name, tribe, and other subject headings, including the cemetery and student records. The affidavit forms that the Army or NABS can provide need to be notarized and then sent to the Army Cemeteries Division. After acknowledging receipt, the Army begins the process in February for rematriation of remains in the summer in between college sessions. The Army will reimburse travel costs and pay for costs associated with the funerals.

In all this darkness of stolen children, I marvel in how meaningful Sophia’s short life was and how many people she has touched. She is introducing me and my sons to the island where my mother was born. People are seeing her homecoming as the end of things being done to Alaska Natives and Unangax specifically. Returning Sophia is creating an excitement on St. Paul Island, and is giving hope to young people there that we can take back our culture, our language, and our stolen children.

There were 357 Native American boarding schools in the U.S. Almost all of them were modeled after Pratt’s “Kill the Indian and Save the Man” template. Almost all of them have their own cemetery. My job is to locate the children and connect them with their families because like at the Kamloops Indian Residential School in Canada, orphans who die away from home just disappear.