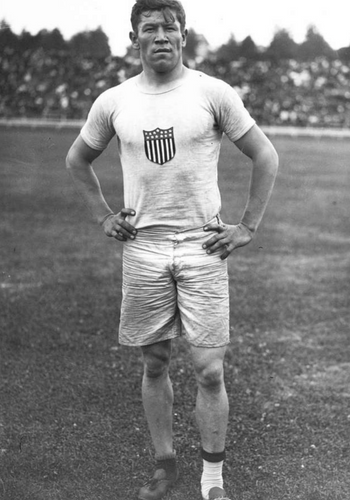 Opinion. Jim Thorpe, a citizen of the Sac and Fox Nation, is an iconic hero among Native Americans. He was a dominant college athlete, a medal-winning Olympian and a Hall-of-Fame professional football player. He also played professional baseball and basketball, for good measure.

His reputation was perhaps cemented when King Gustav of Sweden called him the “greatest athlete in the world” upon presenting Thorpe with two Olympic gold medals at the 1912 Olympic Games in Stockholm. Thorpe had earned the medals with dominating performances in the decathlon and pentathlon, giving Native people a great deal of pride — and some bragging rights — when talking about Thorpe.

Unfortunately, as most Native Americans know, Thorpe’s story of Olympic excellence did not end there. One year after winning gold, the medals were stripped from him by the International Olympic Committee (IOC) after it was discovered Thorpe had been compensated—payment that amounted to the cost of his room and board—for playing minor league baseball prior to participating in the 1912 games.

The IOC erased Thorpe’s records from the Olympic record books.

Attempts to have the medals returned were not rewarded until 1982, almost 30 years after Thorpe's 1953 death when replicas were delivered to his family. Even though the gold medals were awarded, the IOC did not restore Thorpe’s records in the Olympic history books.

That changed on Friday, which coincidentally marked the 110th anniversary of Thorpe’s decathlon win. The IOC announced that Thorpe’s records would be reinstated, and he was formally acknowledged as the sole gold medalist in pentathlon and decathlon at the 1912 Stockholm games.

Friday’s announcement was made possible, in part, by the engagement of the nonprofit Bright Path Strong organization, supported by IOC Member Anita DeFrantz.

Two years ago, Bright Path Strong and its tribal partners launched a major campaign to right this greatest injustice in Olympic history and have Thorpe reinstated as the sole champion in his events.

One major endeavor included an online petition, which yielded 75,847 signatures. Collecting that many signatures was significant because it caught the attention of the IOC.

Ms. DeFrantz became an ally after learning how Thorpe was wrongfully stripped of his gold medals and had "survived an education designed to rob him of his culture" during his youth. Thorpe, as many know, attended the Carlisle Indian Industrial School, during the Indian boarding school era.

As the headlines about Thorpe’s reinstatement hit my phone’s news feed on Friday, I began to smile because I knew a motivating force for this historic news came through the efforts of my friend and fellow Prairie Band Potawatomi Nation tribal citizen, Nedra Darling. She and I have had many telephone conversations about the efforts of Bright Path Strong, an organization she co-founded.

Darling is well known among tribal leaders and others because she served for many years as the Public Affairs Director for the Office of the Assistant Secretary for Indian Affairs at the Department of the Interior until her retirement in late 2019.

Since retiring from the Interior Department, she has dedicated her time to the legacy of Jim Thorpe. Bright Path Strong is planning a full feature film on Thorpe’s life. When the pandemic slowed down the film production, Darling decided it was time to get Thorpe’s gold medals restored solely in his name.

During the past two years, Darling called me frequently to update Native News Online on the progress being made for this very just cause to have Thorpe’s records restored.

Bright Path Strong’s efforts finally paid off, and Indian Country was ecstatic when the news broke. Praise for the reinstatement of Thorpe as the sole gold medal winner streamed in from all over Indian Country, including NCAI, the country’s largest national American Indian organization.

“The light of true greatness can never be extinguished no matter the forces of darkness that seek to deny it. Jim Thorpe’s light will eternally shine to inspire generations of our youth to believe in themselves and the infinite power of their God-given gifts, talents, and dreams,” NCAI President Fawn Sharp (Quinault Indian Nation) said.

The news caused another history-making Indigenous Olympian to shed a few tears.

Prior to the IOC’s formal announcement on Friday morning, Darling called Billy Mills (Oglala Sioux Tribe), who won the Olympic gold medal in the 10,000-meter run at the 1964 Tokyo games. Darling read Mills the letter she had received from the IOC, saying they would name Thorpe the sole recipient of the medals he’d earned.

“I just broke into tears because I just felt so elated,” Mills told Native News Online yesterday afternoon. “When they announced he was the sole recipient I started to cry and in my body, I felt for the first time I am an Olympian.”

When I was growing up, Jim Thorpe’s name and the “greatest athlete in the world” were almost synonymous with each other. He was always a hero to me, as well as to many non-Natives of my generation.

The older I get, the more I have come to realize that we need heroes in Indian Country. The singular achievements of Jim Thorpe at the Olympics — the world’s largest stage for sports during the 20th century — made him a true hero to Native Americans and to all Americans.