Holding the U.S. Government to Its Word & Fulfilling a Promised Treaty Right 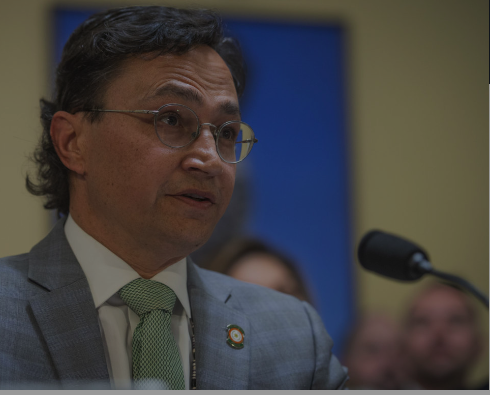 Guest Opinion. Almost 200 years ago, the Treaty of New Echota between Cherokee Nation and the United States government was signed. Two years ago, I called on the U.S. to finally fulfill a commitment made in that treaty by seating a Cherokee Nation delegate in Congress, and I nominated Kim Teehee for the role. Last month, the U.S. House of Representatives finally held a historic hearing on this matter.

At the hearing, bipartisan members of the powerful House Rules Committee conveyed their support for seating our delegate. Now the House needs to hold a vote to make good on this promise.

Our Cherokee ancestors knew the importance of having a seat in Congress for about as long as Congress has existed. As far back as the 1785 Treaty of Hopewell, Cherokee Nation leaders insisted on the right to a “deputy of their choice.” The federal government never honored that right, but the Cherokee Nation did not give up. When the Jackson Administration came back to the Cherokee Nation looking to negotiate a new treaty in 1835, Cherokees made sure to include a provision for a delegate in Congress. That Treaty of New Echota, including the delegate provision, remains a living, valid treaty today.

I was proud to answer questions about the Cherokee Nation’s right to a delegate during the recent House Rules hearing. Some wondered whether seating the delegate would provide dual representation for Cherokee citizens. However, these concerns are unwarranted, because having a “delegate” is not the same as “representation” in the U.S. system. That’s why the word “delegate” was carefully chosen in the Treaty of New Echota.

Since the United States was founded, the term “Representative” has had a unique meaning in our constitution. To represent in the constitutional sense requires having a vote on the final passage of legislation. Since the Cherokee Nation delegate would not be able to vote on final passage, dual representation is not an issue. It works that way for delegates already in Congress, such as those from U.S. territories and the District of Columbia.

In 2019, as the Principal Chief of the Cherokee Nation, I followed our constitution by nominating Kim Teehee to serve as our delegate. Her bipartisan experience in D.C. coupled with her vast policy expertise make her an exceptional choice to be our first delegate.

The Senate approved of the idea when they originally ratified the Treaty of New Echota. Under the U.S. Constitution, the Treaty of New Echota is already classified as the “supreme law” of the land. Now all that remains is for the House to do its duty by seating Cherokee Nation’s delegate. They can do this with one simple vote, with no need to pass a new law through the Senate and the President.

Tribes, national tribal organizations, and tribal citizens across the country stand strongly with the Cherokee Nation in our push to rightfully seat our delegate. They understand what it would mean for the federal government to fulfill its promise and meet its solemn treaty obligations. This would be a historic victory for treaty rights and the sovereignty of all Indian tribes.

We are now calling on the House of Representatives to hold a vote. I urge you to share our campaign for a Cherokee Nation delegate with five friends or family. Visit www.cherokeedelegate.com to learn how you can act today.