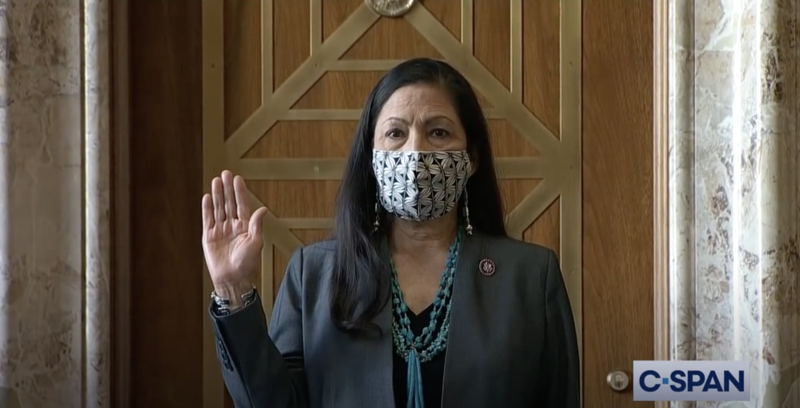 Opinion. It was difficult to not get emotional as Rep. Deb Haaland testified at her confirmation hearing to become the 54th secretary of Dept. of the Interior before the Senate Energy and Natural Resources Committee. The hearing that was held over two days and three rounds of questioning produced feelings of pride and disgust.

I was proud watching and listening to Haaland, a highly qualified woman, who happens to be a 35th generation New Mexican from the Pueblo of Laguna, an attorney and a member of Congress testifying to become the first American Indian in history to serve in a presidential cabinet.

Further pride came when I realized she will, if confirmed, lead the Interior Department that houses the Bureau of Indian Affairs (BIA) that had its origins in the War Department in 1824. It certainly does not take a genius to realize the BIA’s genesis within the War Department was not to designed benefit the well-being of our ancestors. It was to further the genocide process already underway back then.

More pride came when I remembered something Haaland said in December, on the day she was nominated to be Interior Secretary.

“This moment is profound when we consider the fact that one former Secretary of the Interior once proclaimed his goal, to quote 'to civilize or exterminate us,'" she said, referring to an 1851 remark by Interior Secretary Alexander H.H. Stuart. 'I am a living testament of the failure of that horrific ideology."

"I also stand on the shoulders of my ancestors and all the people who sacrificed so that I can be here,” she added.

More pride came when Haaland told the story on Wednesday that Navajo Code Talkers first used “Our Mother” or “Mother Earth” as the first code words for the United States as they prepared their codes to help save democracy during World War II.

“It's difficult to NOT feel obligated to protect this land and I feel that every Indigenous person in this country understands that,” she added.

Unfortunately, not everyone is pleased by Haaland’s historic nomination, especially the Republican members of the Senate Energy and Natural Resources Committee. They showed up in full force, their paternalistic and condescending behavior in full display.

Here is when disgust surfaced for me: Several of the Republican senators treated Haaland with complete disrespect. This ill treatment triggered memories of the gross disrespect Indigenous women were treated with since the arrival of Columbus and his men. Throughout the course of history, Indigenous women have been subjugated to the control of non-Native men.

Funded by the oil and gas industry, they did not hold back on their behalf.  Without listening, they told her she was wrong. The Republican senators disregarded the decorum typically afforded to a fellow lawmaker.

“I almost feel like your nomination is this proxy fight about the future of fossil fuels,” said Sen. Maria Cantwell (D-WA), after hearing how her Republicans colleagues conducted themselves on Tuesday.

After watching the three rounds of questioning presented by the Committee, Nedra Darling, a retired spokesperson for the Dept. of the Interior – Indian Affairs was also disgusted.

“I witnessed something that really did not sit well with me. I worked over 30 years for the federal government and have prepared many nominees in their confirmation hearings. I am so disappointed by what I saw and heard, especially from a senator that represents many wonderful Native American constituents,” Darling posted on her Facebook page referring to Sen. John Barrasso (R-WY).

Baarasso, a former chairman of the Senate Committee on Indian Affairs and the top Republican on the Committee, attacked Haaland viciously for two days.

On Wednesday, Barrasso pressed Haaland about the Endangered Species Act, which she supported. He was upset she wanted grizzly bears left on the endangered list.

As Haaland began to respond referencing her track record of working collaboratively with local tribes, communities and scientists when it comes to the Act, Barrasso interrupted her, pointing his finger on the table and shouted, “I’m talking about the law.”

Haaland responded: “Sir, I will always follow the law.”

After the hearing on Wednesday afternoon, Sen Steve Daines (R-MT), a member of the Senate Committee on Indian Affairs, vowed to block and encourage the Senate to reject Haaland’s nomination.

“The Secretary of the Interior should be a consensus-builder, with a pragmatic and well-balanced track record. I’m concerned Rep. Halaand will be unable to separate from her progressive agenda and support what's best for Montana and the West. Her hostile record towards energy, natural resources and sportsmen issues are very concerning,” Daines said in a statement.

The truth of the matter is the Republicans wanted to paint Haaland as a radical. Even in their disgusting paternalistic behavior over two days, they could not accomplish this.

What these Republican senators accomplished is a show of disrespect towards an Indigenous woman and Indian Country. Considering several of them are members of the Senate Committee on Indian Affairs, they should be removed from their roles.

Even with the disgust brought on by mistreatment of Haaland, I am proud that in the face of tough questioning, she treated the senators with more respect than they afforded her.