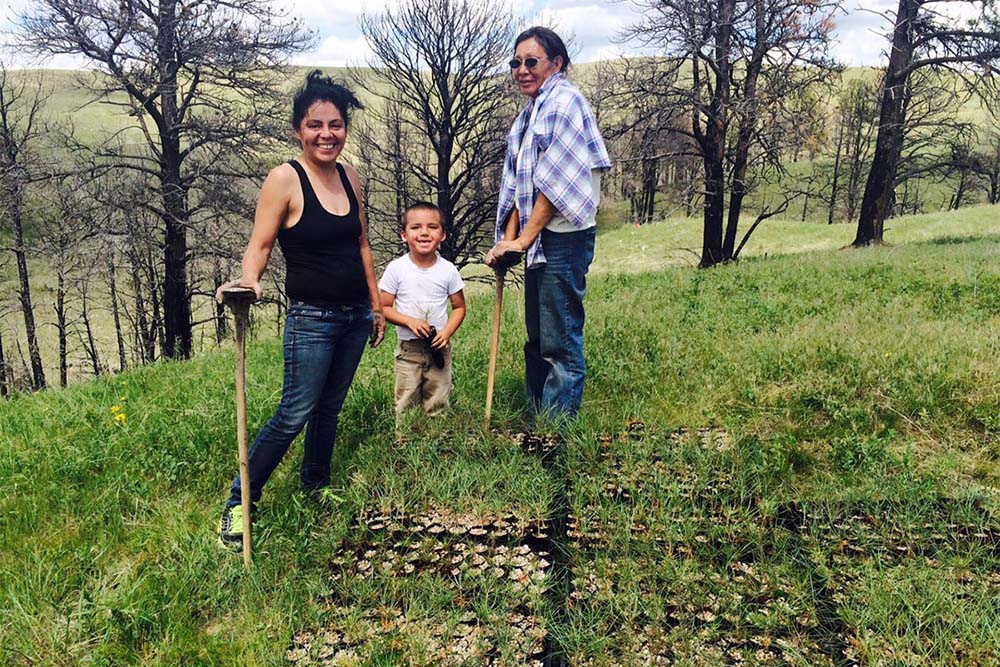 This Earth Day, tens of thousands of Ponderosa Pine, Douglas Fir, Plains Cottonwood, Coyote Willow, Chokecherry, Buffalo Berry, and Wild Plum grown at the Colorado State Forest Service Nursery in Fort Collins are ready to be picked up and delivered to Tribal communities across the Western U.S, growing not just trees, but a movement.

For generations, Indigenous peoples have grown and tended trees to meet human needs - but the forests remaining on Native Lands are losing their capacity to do so. A combination of severe fires, invasive species, extreme weather, and questionable land management decisions by people external to Tribal communities have affected the ability of the forests to provide in ways they once did.

However, to sustain all life on earth, it’s clear we must put Indigenous voices and priorities at the center of the conversation about how to restore critical ecosystems. While only 2 percent of the US is considered Native Land, expanding Indigenous tenure and stewardship of land can yield tremendous benefits, not just to human rights, but for our climate.

Over the past century, these landscapes and the sustenance they once provided have suffered greatly due in large part to loss of Native control. While they were once places to hunt, collect water, find medicine, edible plants, and harvest trees for firewood and ceremonies, the land is now charred and inhospitable to local flora and fauna.

In fact, just last week while I was walking the dry canyons of the East Jemez Mountains with members of Cochiti and Kewa Pueblo, the importance of Indigenous control came clearly into focus. The 43,000 acre Cerro Grande Fire of 2001 and the 156,000 acre Las Conchas wildfire of 2011 had incinerated the headwaters of their watersheds, leaving a lunar landscape with little topsoil and vegetation left. Apart from the uplands, the fires burnt their way down the canyons, torching prime hunting and grazing lands, and permanently affecting water quality and availability for Pueblo communities and farms downstream. 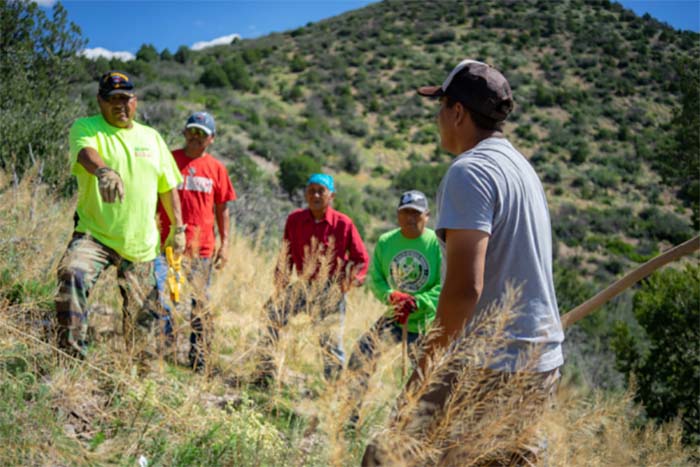 Among the ancestral Pueblo lands burned in these fires are lands managed by private landowners, the Bureau of Land Management, National Forest Service, Bandelier National Monument, affected Counties, and the State of New Mexico.

In order to help drive recovery and restoration for these critical watersheds, Trees, Water & People stepped in as a neutral party with Native staff, relevant experience, and local rapport, to build a coalition of actors that put Indigenous voices and priorities at the center of the conversation.

Trees, Water & People is not the only organization who has recognized the importance of Native voices in the conversation around restoration. Many others are helping to transform the leadership and decision-making structures that have kept Indigenous people out of the conversation for so long. There’s the Lomakatsi Restoration Project, a multicultural workforce of Latinx, Tribal, and Euro-American crew members working to restore important riparian areas of Bear Creek between Ashland and Medford in Southern Oregon where the September 8, 2020 Alameda Fire devastated human and ecological communities. As well as Trees for Climate Health, an initiative from Jonas Philanthropies that is stepping in to support and fund dozens of tree-growing organizations across the world, including Indigenous communities in the US, Guatemala and Honduras, and grow 10 million trees by 2025.  When we follow the leadership of Native communities, funders can have more effective programs and address multiple issue areas simultaneously.

Planting a tree on Tribal Lands is an act of Native liberation. It marks the effort of a people to reclaim stewardship of lands and resources that were once theirs to manage in perpetuity, until a patchwork of agencies, bureaucracies, and private settlers made watershed management a jurisdictional exercise. Planting trees on Tribal Lands is an act of prayer for the continuity of Indigenous people and their lifeways.

So, this Earth Day, when the 35,000 seedlings in Fort Collins are distributed to the aforementioned Cochiti, Kewa, and Jemez Pueblos in New Mexico, as well as to the Oglala Lakota Tribe in South Dakota, and the Ute Mountain Tribe in Colorado, we’ll be continuing this movement. Putting Native people at the head of restoration efforts on Tribal Lands, creating employment in natural resource management, and bringing attention to the connection between watersheds, and sustainable livelihoods will ensure the continuity of Indigenous cultures long into the future.

Sebastian Africano is the Executive Director of Trees, Water and People where he oversees all aspects of the organization's work in Central America and on US Tribal Lands. In his 16 years with TWP, Sebastian has built a multicultural and multidisciplinary team that is addressing the overlapping challenges of climate change, sustainable economic development, and Indigenous sovereignty across North and Central America.

Dr. Valerie Small (Apsáalooke) is the National Director of Tribal Programs. As a ‘First Generation’ student to graduate with a college degree in her family, Valerie completed her PhD in BioAgricultural Sciences & Pest Management-Weed Sciences Division from Colorado State University focusing on interdisciplinary research conducted on the homelands of the Crow Tribe. Val is dedicated to improving access and availability to harvest culturally significant plant/animal species within Tribal lands for future generations to use as food sources (decolonizing the diet), and plant species utilized in the practice of sacred ceremonies.