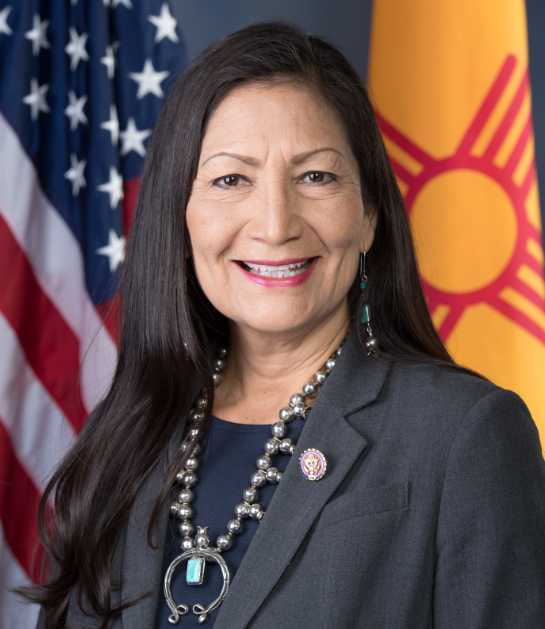 Opinion. Fifteen members of the House of Representatives sent a letter to President Joe Biden late last month asking that he withdraw the nomination of Rep. Deb Haaland (D-N.M.) as secretary of the Department of the Interior. Haaland, a tribal citizen of the Laguna Pueblo, will become the first American Indian to serve in a president’s cabinet when confirmed by the U.S. Senate.

The 15 members of Congress—all Republicans—claim Haaland’s past support of the Green New Deal is enough to ask the president to withdraw her name from consideration. The Green New Deal, introduced two years ago, is a congressional resolution providing a comprehensive plan to address climate change and economic inequality. The resolution calls for federal agencies to wean the country from fossil fuels and reduce planet-warming greenhouse gas emissions across the U.S. economy.

“The nomination of Representative Haaland as Interior Secretary embodies clear support for the Green New Deal and a rejection of even the potential of high-wage jobs,” the Republicans’ letter states. “We implore in the strongest terms to withdraw the nomination of Representative Haaland and instead nominate a consensus-driven individual who will not implement policies that will kill jobs and increase the country’s reliance on foreign adversaries."

The resolution is based on reports by the United Nations and 13 U.S. federal agencies that warn that global temperatures, without action, will continue to cause more intense heat waves, wildfires and droughts, costing the U.S. economy billions by the end of the century.

The report also cites the severe impact of climate change on Indigenous communities:

The Green New Deal has received vast support by a former vice president, members of the House of Representatives and the Senate, governors and mayors, including Pete Buttigieg, now U.S. Secretary of Transportation, and many global climate organizations.

Blocking anyone’s nomination based on support of this deal would eliminate hundreds of lawmakers and elected officials from appointments to Biden’s cabinet. Clearly, there is more driving this tantrum than Haaland’s support of this non-binding resolution.

The group chose to use scare tactics to do the dirty work for the oil and gas industry. Their assertion that jobs will be lost is inaccurate. Those who support climate change reduction have long asserted – and the market shows -- that new high-paying jobs in clean energy industries are the jobs of the future.

According to the World Resources Institute, power sector jobs in wind and solar were responsible for 544,000 jobs in 2019, compared to 214,000 jobs in fossil fuel generation. When combined with jobs in energy efficiency, low-carbon vehicles and clean fuels, 3.6 million Americans worked in clean energy jobs in 2019.

Given President Biden’s goal to reduce climate change and his promise to create new jobs in the clean energy sector, the letter from the 15 Republicans was dead on arrival at the White House.

“We write today to express our profound disappointment after learning that you are leading an effort in the House of Representatives to oppose the appointment of Representative Deb Haaland as the first American Indian Secretary of Interior. This historic nomination is more important to us and all of Indian Country than any other Cabinet nomination in recent history.

"Most concerning is that you did not consult with us as the sovereign federally recognized tribal governments in your District in advance of initiating this effort that has such a direct impact on us as your American Indian constituents. Yet it appears you did consult with industrial interests in the 8th District."

Those interests are oil and gas.

Aaron Payment, chair of the Midwest Alliance of Sovereign Tribes (MAST), also wrote Stauber: “Your demonizing of (Haaland) in your letter as ’a direct threat to working men and women’ is not just offensive; it is hostile and irresponsible given the current state of crisis in our nation resulting from politicians vilifying one another."

In another letter to Stauber, Mille Lacs Chief Executive Melanie Benjamin expressed dismay at the shunning of tribal communities: "Your letter cites your concern about jobs yet Indian tribes are the largest employer in your district. In Federal-Indian affairs, consultation with tribal governments is the bedrock of our government-to-government relationship and that includes the Congress."

Tribal leaders are not impressed with Stauber’s leadership. Perhaps, they should mount an effort to oust him in 2022.

The Senate votes on cabinet nominations. The House of Representatives does not. The sentiments of the 15 GOP members of Congress expressed are meaningless. However, it does demonstrate how far they were willing to go to carry the water for those who fund their campaigns.