From Gorsuch to the Grizzly, “We Hold the Government to Its Word” 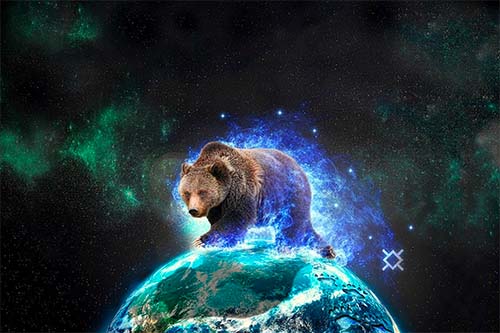 GUEST OPINION.  “We hold the government to its word,” wrote Justice Neil Gorsuch in the McGirt decision issued by the US Supreme Court on July 9. As the First People of this land, we’ve been waging that struggle since the Lenape entered the first treaty with the Continental Congress in 1778. It’s been a while.

“Today we are asked whether the land these treaties promised remains an Indian reservation for purposes of federal criminal law,” Gorsuch summarized, and “because Congress has not said otherwise,” he detonated shockwaves with the majority opinion in the 5-4 ruling which found that the Muscogee Nation reservation as defined by its 1866 treaty had not been disassembled.

“Neil Gorsuch & the four liberal Justices just gave away half of Oklahoma, literally. Manhattan is next,” Tweeted the rarely informed senator, Ted Cruz (R-TX), whose estranged relationship with facts is consistent with the White House’s lead. The “half of Oklahoma given back to Indians” headline flashed around the world, despite its misleading connotation.

No legal title to land was returned to the Muscogee Nation. No Boomers or Sooners are being evicted. At question was criminal jurisdiction over that land; the state doesn’t have it over tribal members, the tribe does, so now we need to push for a thorough review of the Major Crimes Act that will be the dominant statute on that land and now has mainstream focus. A 19th century bill has no place in the 21st century unless Indigenous people are forever to be “wards of the nation,” and we can’t wait for Congress not to say otherwise.

In any other week, a judicial ruling with significant implications for Indian Country would have been the lead story. It is not without irony that US Congressmen and Five Tribes of Oklahoma tribal members, Tom Cole and Markwayne Mullin, who responded to McGirt by stating that they were “committed” to “affirm tribal sovereignty,” had petitioned the Trump administration to support tribal nations during the long-running “grizzly bear issue,” that became Crow Tribe, et al. v. Zinke.

“We write to urge you to honor the mandatory pre-decision and meaningful government-to-government consultation with tribes when considering the delisting of the grizzly bear from the Endangered Species Act,” they wrote to Interior and the White House to no avail, but the issue became a step closer to resolution the day before SCOTUS ruled on McGirt, when the 9th Circuit Court of Appeals handed tribal nations an overwhelming victory in its ruling on the Trump administration-led appeal of a US District Court decision on Crow Tribe, et al v. Zinke.

Interior Secretary David Bernhardt, the US Fish and Wildlife Service (FWS), and the states of Wyoming, Idaho and Montana sought to reverse the September 2018 ruling by Judge Dana Christensen that returned the grizzly bear in the Greater Yellowstone Ecosystem (GYE) to Endangered Species Act (ESA) protections.

Make no mistake, this is a seminal case and moment for Indian Country. The 17-member tribal plaintiff alliance not only prevailed over the Trump administration and the states, but intervenor-defendant-appellants Safari Club International, the NRA, and a coalition of trophy hunting organizations, Big Ag, and ranching interests. The tribal plaintiffs not only saved the sacred grizzly bear, they saved our religious freedoms, our ancestral lands, and defended tribal sovereignty and our treaty rights. The 9th Circuit held this administration accountable for its failure to do what Reps. Cole and Mullin had asked them to do - to uphold the federal-Indian trust responsibility.

This case was and remains, as tribal plaintiffs have emphasized, a “Trojan Horse” with far-reaching consequences beyond the matter of federal protections for the Great Bear.

True to form, environmental organizations have taken the credit and spotlight, but it was tribal nations that changed the dynamic and drew Interior, FWS, and the states into moral and legal arguments they were ill-prepared to fight, and reengaged a public that was weary of the environmentalists v. the government proforma narrative.

It was the third major defeat of the week for the Trump administration, following Judge James Boasberg’s ruling in US District Court in DC that the Dakota Access Pipeline had to be shut down pending an environmental review. The Standing Rock Sioux Tribe is a plaintiff in both cases. The SCOTUS decision not to remove obstacles to allow the construction of the Keystone-XL pipeline was the third.

There is a critical and overlooked connection between all three.

For almost three decades, the federal government has acknowledged that Greater Yellowstone is the ancestral land of 27 tribal nations. Prior to taking the issue to federal court, tribal plaintiffs explained how removing ESA protections from the sacred grizzly bear would concurrently remove protections from their sacred lands, and open the door to extractive industry and livestock interests to exploit a greatly diminished regulatory process for land leases. Several tribal organizations testified to this at a fall 2018 US Senate Environment and Public Works Committee hearing.

Throughout, tribes argued that the decision to remove protections from the grizzly in the GYE was politically motivated. The 9th Circuit panel rebuked the government, and validated the tribes’ and the lower court’s ruling that Interior, “violated the ESA because it was the result of political pressure by the states rather than having been based on the best scientific and commercial data.”

The reason is apparent. The Trump Interior Department engaged oil and gas services giant, Amec Foster Wheeler, to undertake the scientific peer review of FWS’s grizzly delisting rule. Former Halliburton executive Jonathan Lewis was appointed CEO of Amec within days of the rule first being published. It takes little imagination to gauge their reaction to this portion of the government’s delisting rule:

“It is true that development can occur in conjunction with oil and gas leases in permitted resource exploration or extraction sites such as oil and gas exploratory wells, production wells, plans of operation for mining activities, and work camps.” The government standard in the rule was the 1872 General Mining Act. They intended to take our lands today as they did in the 1870s.

“Work camps” is a euphemism for “man camps.” Here I am going to quote Rain, the director of the Murdered and Missing Indigenous Women documentary, Somebody’s Daughter. “There exists a sickening parallel hemisphere-wide between the rape and destruction of the earth and the rape and murder of indigenous women and girls, be it for gold and silver in the frontier era, or for fossil-fuels today – the virus is the same and the victims are unchanged.” Is the significance of this case becoming clearer now?”

Former Vice President Dick Cheney, the godfather of Wyoming politics, was Halliburton CEO from 1995–2000. His daughter, Congresswoman Liz Cheney, infamously stated that tribal plaintiffs in the grizzly case were “intent on destroying our Western way of life.”

Upon learning of the 9th Circuit’s decision, Lynnette Grey Bull (D-WY), who is challenging Cheney for Wyoming’s US Congressional seat, said, “Our elders teach how the grizzly bear brought us our medicines. ‘Grizzlies know not only about roots and herbs for physical healing but also about healing mental conditions,’ they say. In the socio-economic bondage we survive in, our reservation communities need that healing more than ever today. This ruling was critical for tribal nations.”

“Arbitrary and capricious” was how the 9th Circuit characterized the government’s conduct in the “grizzly case” on which our people had so much at stake. It is appropriate to leave the last words to an elder, Hopi Bear Clan leader, Ben Nuvamsa:

“The grizzly bear is central to the culture, religion, identity and sovereignty of Tribal Nations throughout the United States and Canada. Since time immemorial, the grizzly bear has been a sacred icon to us. As First Nations, we have the right to exercise our traditional ceremonies, many of which involve the grizzly. There are federal laws that protect the exercise of our religion, our lands, and our natural resources and every one of these was threatened by the government’s conduct in this case. The 9th Circuit reminded this administration that the law matters.”

We hold the government to its word.

Tom Rodgers is the President of the Global Indigenous Council. A Blackfeet tribal member, Rodgers was the “whistleblower” in the Jack Abramoff scandal, described by the Washington Post as “the largest congressional lobbying scandal in the last one hundred years.” Rodgers is ever-present in defending Native Voting Rights, and during the Obama administration, Jim Messina, the president’s Deputy Chief of Staff, described him as, “the best and foremost Native American advocate, strategist and lobbyist.”