Even Though Some Uncle Tomahawks are Okay with the Tomahawk Chop, It’s Not 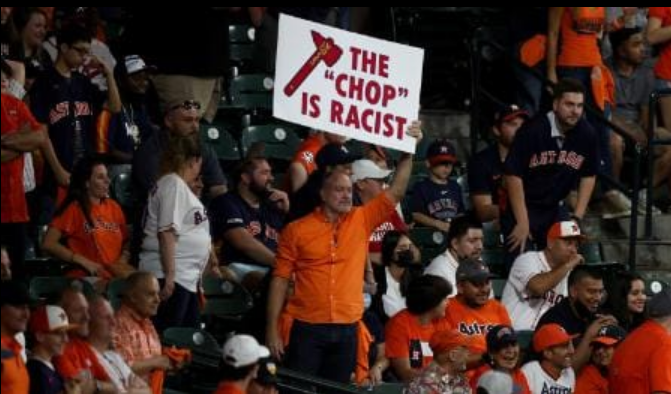 Opinion. With the Atlanta Braves in this year’s baseball World Series, conversations this past week about the team's appropriation of Native American imagery and culture have extended beyond the green playing field of Truist Park, where the team plays their home games.

On Tuesday, Major League Baseball (MLB) Commissioner Rob Manfred met with the press and answered questions about the Braves name, chant, and fans doing the offensive “tomahawk chop” at their home games.

Manfred defended the Atlanta baseball club. He said the Atlanta team officials have handled the local Native American community in a respectful way.

The idea the Atlanta baseball team even takes on the name Braves is absurd.

History tells us because of the Removal Act of 1830, during the presidency of Andrew Jackson, the vast majority of the Native Americans who lived in the state were forcibly removed westward during the Trail of Tears.

After the tribal removal from Georgia, the state’s population grew due to a vast increase of Whites and Blacks. According to the 2019 U.S. Census Bureau estimates, Georgia’s population was 57.8 percent White, 31.9 percent Black, 4.1 percent Asian, and 0.4 percent American Indians and Alaska Natives.

The Atlanta major league team originated as the Milwaukee Braves and moved to Georgia in 1966. The team kept the Braves nickname and continued the usage of Native American imagery. The franchise even used the services of an Odawa named Levi Walker from Cross Village, Michigan. Every time the Atlanta team hit a home run, Walker, who played Chief Noc-a-Homa would come out of a teepee that was beyond the outfield wall at Atlanta Fulton-County Stadium. He was paid $60 per home game.

After a dispute over pay, Walker and the team parted company in 1986. He was not replaced. Chief Noc-a-homa was retired by the team.

In 1990, the team introduced a new logo that features the team’s name with an image of a tomahawk. Apparently, blood-thirsty savages who are brave run around with tomahawk looking for their next kill.

The next year gave birth to the tomahawk chop.

By the time the Atlanta team made the National League Playoffs in 1991 with the Pittsburgh Pirates, the tomahawk chop had become a craze. Former President Jimmy Carter was highly criticized for sitting in the front row with the team’s owner Ted Turner, and Jane Fonda doing the tomahawk chop.

Thirty years not much has changed for the Atlanta fans who think they own the tomahawk chop.

Through the years, the Atlanta team always seems to find a small group or even a tribal leader who says there is nothing wrong with the tomahawk chop.

There is much wrong with one culture appropriating the culture of another.

Seth Thomas Sutton (Little Traverse Bay Bands of Odawa Indians descendant), author of the just released The Deconstruction of Chief Blackhawk: A Critical Analysis of Mascots & The Visual Rhetoric of the Indian said to me on Saturday:

“Indigenous-based mascots and the associated ‘chop’ and ‘chant’ represent authentic Indigenous identities with that of falsehoods and stereotypical tropes that the Atlanta Braves fans, and dominant White society, view to be truthful and historically accurate. Continuing to use these harmful images and performances, dominant White society engages in acts of neo-colonialism, which in turn, further normalizes oppressive power structures that are in place to both support and be supported by Indigenous subjugation.”

I have decided to boycott watching the World Series this year because of the Atlanta Braves. And, I like watching the fall classic. However, I really don’t want to subject myself to a bunch of non-Natives shouting some intelligible chant and the tomahawk chop that I both disgusting and disgraceful.

Further, I think it is so hypocritical the Atlanta baseball franchise thinks it appropriate to continue with its name in a state our people were driven from so long ago.