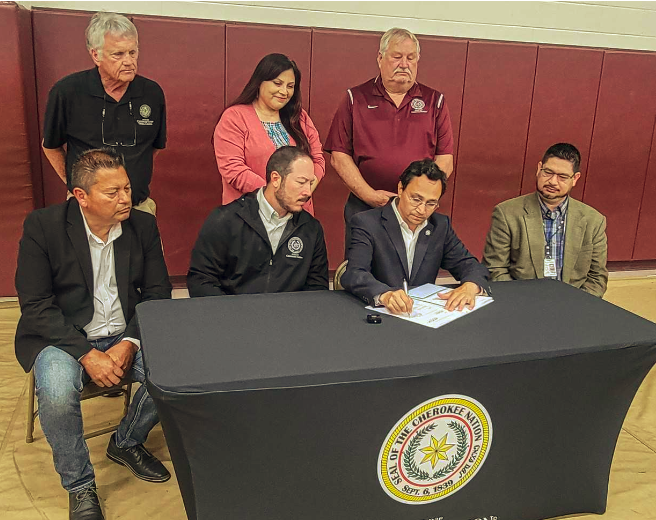 Guest Opinion. Dark money corrupts. Democracy dies in the dark. But, the sovereign government of the Cherokee Nation Reservation is fighting back with recent election law reforms that demand transparency.

Let us start with the facts: Our longstanding election laws require transparency and accountability with respect to campaign donations. Donation limits, mandatory disclosure and prohibition against “independent expenditures” are all hedges against corruption embedded in Cherokee law. I believe our campaign finance laws were among the strongest in the country even before the latest reforms.

But, the 2019 election exposed some weaknesses in our laws. It is true that a candidate in 2019 was disqualified for illegally coordinating with an illegal entity operated by non-Indians out of Oklahoma City. Public hearings, including by our Supreme Court, disclosed this attempt to cheat and to steal an election by a group called “Cherokees for Change.” The law held one lawbreaker accountable. However, the law left many involved in the illegal scheme unscaur elections. Perhaps others are circling the Cherokee Nation with the same plans.

The Council of the Cherokee Nation recently took action after literally years of careful review of our election code. I proposed, and the council enacted, the country’s strongest ban on dark money. The law passed 15-0, with two councilors absent. Deputy Speaker Victoria Vazquez said she sponsored the legislation so that “people, not outside corporate interests, control our democracy.” She is spot on.

I proudly signed the reforms into law earlier this month alongside Deputy Chief Bryan Warner. The law reinforces the ban on the kind of anonymous and unlimited piles of cash that illegally poured into our 2019 elections from Oklahoma City. But, the law now punishes those who donate to these illegal entities with stiff criminal and civil penalties.

As Council Speaker Mike Shambaugh said, “The message we are sending today is that this is not 2019; you won’t get away with corruption.”

The ban on dark money is a true exercise of our tribal sovereignty and a win for government transparency. While other nations may be content with unlimited, unregulated, anonymous campaign contributions, the Cherokee Nation is not. Sixteen of 17 council members expressed support for this basic idea: The Cherokee people deserve to know who is contributing to candidates for public office.

The law did not hold accountable the people who funneled an unknown amount of money into the election. We may never know the full extent of the corruption, who made donations and what they hoped to gain from their scheme. Perhaps these same outside interests are regrouping to again try to buy oAs I reflect on our Nation’s bold stand against corruption, my thoughts turn to the current election campaigns in Oklahoma. Recently, I pushed back on politicians in Oklahoma who are claiming Cherokee sovereignty is “the greatest threat” and that our reservations should be “disestablished.” A number of powerful politicians seem to fear Cherokee Nation making its own laws and protecting the public interest.

From the perspective of anti-Indian politicians, maybe our sovereignty is a threat. It is certainly a threat to the corrupt influence of those who would try to secretly buy our elections.

Never miss Indian Country’s biggest stories and breaking news. Sign up to get our reporting sent straight to your inbox every weekday morning.
ions are busy hatching a “plan B” to try to control tribal governments. The Cherokee people and their representatives will not stand for it. No wonder some of these anti-sovereignty politicians are scared.

We are sovereign. The Cherokee people demand transparency. The days of corrupt dark money in Cherokee politics are over.