Elders Are Finally Talking About Their Indian Boarding School Experiences;  The Stories Are Heartbreaking 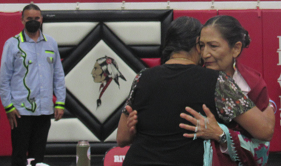 Opinion. Thirty some years ago, I attended a family function. As more of the family assembled for dinner I casually asked two of my mother’s cousins why we didn’t know a whole lot about our family history. It seemed to me that our elders should have passed it down so that I would be able to pass it on to my children and grandchildren.

I soon realized I crossed a boundary within our family.

“Because it wasn’t pleasant,” one elderly male cousin snapped at me. For several awkward minutes no one said a word. We then moved on to an unrelated topic.

I made a mental note to never ask him about our history again. To be clear, my family was a loving one; we just didn’t talk about the unpleasant things that happened to our family members.

That incident came back to me this weekend as I tried to process what I heard on Saturday in Anadarko, Okla. from several elders who recounted the painful experiences they had while attending Indian boarding schools.

The difference between the reluctance of my mother’s cousins and the elders on Saturday was stark. The elders, survivors or descendants of Indian boarding schools, were open about the unpleasant experiences they and their relatives encountered there.

Actually, unpleasant is a kind word for what was presented by Native American elders on Saturday. A more appropriate term would be horrific.

The elders provided graphic and painful examples of physical, emotional and sexual abuse perpetrated by Indian boarding schools staff. One woman spoke about being treated with lindane, an insecticide, to kill lice she may have had upon arrival. Several spoke about having their hair cut off. One woman said the students were made to feel inferior and told they would never amount to anything.

One man spoke about being sodomized by staff. Even though it has been decades since he experienced this sexual crime, he is still traumatized.

The federal government’s Indian boarding schools policy was established to assimilate the Native American children into American society. The mantra for this dark chapter in American history was to “Kill the Indian, save the man.” Saturday’s testimonies suggest that Indian boarding schools staff set out to purposely destroy not only the “Indian” in them, but the very human spirit as well.

On Saturday, one elder woman said she had only been able to talk about her boarding school experiences during the past couple of years. She also said she had received treatment at numerous healing programs for decades and still attends counseling twice per week.

Healing has been a lifelong journey for her.

Native Americans are often told to “just get over it” or “pull themselves up by their bootstraps.” These admonishments may work to motivate slothful middle-class individuals, but they do little to assist Native Americans who were stripped of their culture, language and self-worth.

Experiences were so horrific, those flippant admonishments do further damage. They do not heal the spirit of Native Americans who have suffered great pain and live with deep emotional scars often passed on through generations.

Healing is indeed a lifelong journey. And, it does not occur in a vacuum.

For that reason, it is commendable that the Interior Department under the Native American leadership of Secretary Haaland and Assistant Secretary Newland, have embarked on the Road to Healing tour that will continue through 2023.

Saturday’s testimonies by Native American elders were a step in acknowledging this horrific past.

On Saturday, Secretary Haaland said: “This is one step among many that we will take to strengthen and rebuild the bonds within Native communities that federal Indian boarding schools set out to break. Those steps have the potential to alter the course of our future.”

In the 1990s, the Truth and Reconciliation Commission that was set up after the end of the cruel apartheid regime in South Africa, received more than 22,000 statements from victims about violations of human rights, torture, killings, and severe ill treatment at the hands of the apartheid state.

Its goal was to uncover the truth about apartheid rule and allow for acknowledgement, public mourning, forgiveness and healing. Many have said that the commission was a failure because it did not go far enough. It did not go into making reparations.

Today, Native American elders of our generation, in speaking about the past, are allowing for the uncovering of truths. It is a painful but necessary to expose what happened so that our People and generations to come can begin to heal. It is time to break the intergenerational trauma caused by Indian boarding schools.

It is my sincere hope that the Road to Healing Tour, in exposing these ugly truths, will alter the course of history for Native Americans. It is also my sincere hope that this tour is only the beginning. That these testimonies, at the very least, are treated with sanctity and respect and that the federal government, the church, and all those complicit with the extermination of the first inhabitants of this land, will listen to and acknowledge the damage that was done.