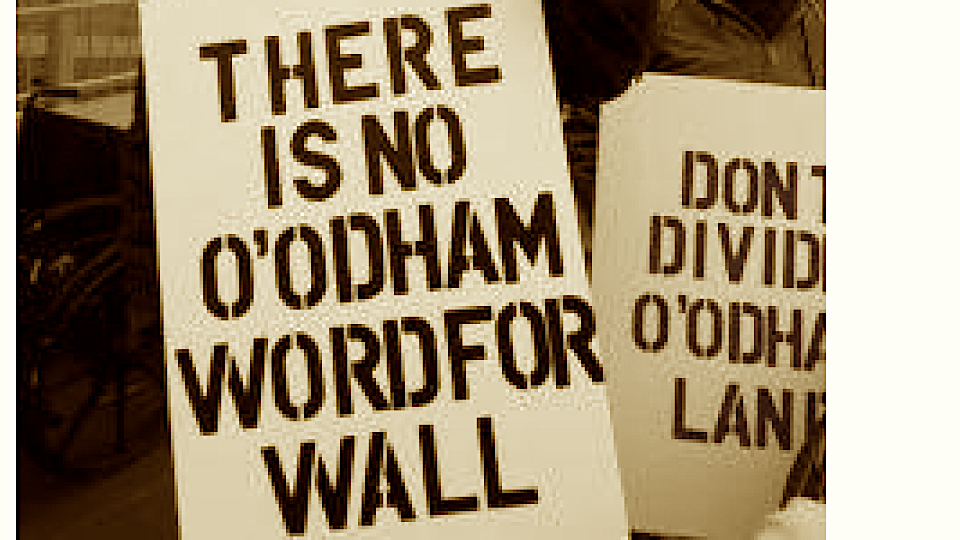 Opinion. In February 2020, Tohono O’odham Nation Chairman Ned Norris. Jr. testified before the U.S. House Natural Resources Subcommittee on Indigenous Peoples of the United States. His testimony was made at an oversight hearing entitled "Destroying Sacred Sites and Erasing Tribal Culture: The Trump Administration’s Construction of the Border Wall."

The Tohono O’odham Nation is located on Arizona’s second-largest Indian reservation and sits on the southern border of the United States. Some of the tribal nation’s citizens still have relatives who live miles into Mexico, proving the point often made by Native Americans that “their borders were not our borders.”

Norris described how Tohono O’odham’s ancestral land was bulldozed and blasted to make room for President Trump’s wall at the southern border of the United States. To accentuate his point, Norris spoke of a phone call he received just prior to his testimony. The caller had some unfortunate — though not unexpected — news: blasting had resumed on his tribe’s sacred lands to clear a path for Trump’s wall.

Norris told the subcommittee that the Trump administration’s Department of Homeland Security (DHS) waived several federal laws which are intended to protect Indigenous sacred sites. Using this waiver, private contractors hired by DHS desecrated human graves along the route of the wall.

“This disrespect for our sacred sites and their desecration at the hands of our federal government is deeply painful,” Norris said. “These sites are not only sacred to the (Tohono O’odham) Nation – they are a part of our shared cultural heritage as United States citizens. As Americans, we all should be horrified that the federal government has so little respect for our religious and cultural values and does not appear to have any intention of slowing down enough to understand or avoid the harm it is causing.”

He further testified that there has been no meaningful government-to-government consultation. Norris said when the blasting began several weeks before, he was notified via a text to his telephone from a federal official. The Trump administration’s DHS, Norris said, was “giving little more than lip service to consultation.”

To be clear: A text message from a federal employee to a tribal chairman does not fit the standard of meaningful tribal consultation. Tribal consultation between the federal government and tribal nations should be done in good faith and on a government-to-government basis.

Within a week of taking the oath of office, President Joe Biden issued a presidential memorandum on tribal consultation and strengthening nation-to-nation relationships.

“It is a priority of my Administration to make respect for Tribal sovereignty and self-governance, commitment to fulfilling Federal trust and treaty responsibilities to Tribal Nations, and regular, meaningful, and robust consultation with Tribal Nations cornerstones of Federal Indian policy,” President Biden wrote in the memorandum.

In response to the uncertainty of presidential commitments to tribal consultation, Rep. Raúl M. Grijalva (D-Ariz.), chairman of the House Natural Resources Committee,  introduced the Requirements,  Expectations, and Standard Procedures for Effective Consultation with Tribes (RESPECT) Act in March 2021.

If passed, the RESPECT Act would codify consultation and coordination by the federal government with federally recognized Tribal governments. The RESPECT Act, aims “To prescribe procedures for effective consultation and coordination by Federal agencies with federally recognized Tribal Governments regarding Federal Government actions that impact Tribal lands and interests to ensure that meaningful Tribal input is an integral part of the Federal decision- making process.”

Further, the Act expresses effective and meaningful consultation requires a ‘‘two-way exchange of information’’, consideration ‘‘of each other’s opinions’’, and ‘‘seeking of agreement on how to proceed concerning the issues at hand’’; and that consultation ‘‘constitutes more than simply notifying an Indian Tribe about a planned undertaking.’’

The Act also would require that consultation be completed before any federal funds are expended for activities that may have substantial direct impacts on tribal lands or interests, including tribal cultural practices or areas of cultural or religious importance. In addition to requiring consultation, the Act would provide a judicial remedy in the event a federal agency fails to engage in meaningful consultation with tribal governments.

According to congressional staff members from the House Natural Resources Committee, Grijalva will push for the RESPECT Act’s passage in September after the Congress’ summer recess.

The passage of the RESPECT Act will ensure tribal nations are able to fully participate in government-to-government tribal consultation at all levels of the federal government, regardless of which party holds the White House.

Congress needs to pass the RESPECT Act as soon as possible.