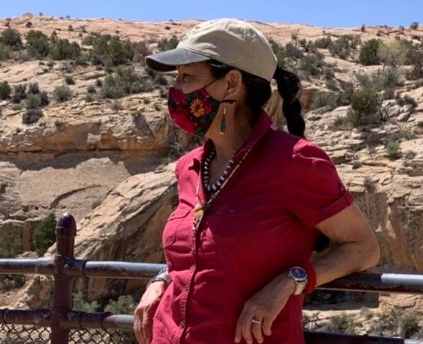 During her third week in office and her first official trip in her new role as U.S. Department of the Interior, Secretary Deb Haaland (Laguna Pueblo) conducted a fact-finding tour of the Bears Ears and Grand Staircase-Escalante National Monuments in Utah.

The visit to the national monuments included meetings with tribal leaders, Sen. Mitt Romney (R-UT) and Utah Gov. Spencer Cox and were part of a review by President Biden’s Executive Order 13990 called “Protecting Public Health and the Environment and Restoring Science to Tackle the Climate Crisis.” Issued on his first day in office, the order takes steps toward reversing President Trump’s actions that are “harmful to public health, damaging to the environment, unsupported by the best available science, or otherwise not in the national interest.” Bears Ears and the Grand Staircase-Escalante National Monuments are named in this order.

Through a presidential proclamation, Trump shrank the size of Bears Ears by 85 percent and Grand Staircase-Escalante by half, which opened the area up to exploitation by oil and gas, ranchers and mining industries.

Haaland will make recommendations to the president within weeks of her visit.

“Decisions about public lands are incredibly impactful to the people who live nearby, not just to us, or the folks who are here today, but people for generations to come,” Haaland told reporters during a news conference in Utah. “It’s our obligation to make sure we protect lands for future generations so they can have the same experiences that the governor and I experienced today.”

The reckless President Trump, seeing opportunity for oil and gas exploration flew to Utah in Dec. 2017 to sign a proclamation that significantly slashed the size of both monuments; reversing the protections set forth by two previous presidents.

Since Trump lifted the protections and downsized the monuments, more tourists have visited the two sites and put natural and cultural resources at risk, said Phil Francis, chair of the Coalition to Protect America’s National Parks.

“Every day that goes by leaves the irreplaceable resources at Bears Ears and Grand Staircase vulnerable to damage or destruction from looting, vandalism or other threats as a result of lack of protective management,” Francis said prior to Haaland’s visit.

The risks extend to looting and vandalism by tourists and to the desecration that industries want to do for profit to the pristine areas of Bears Ears and Grand Staircase-Escalante.

Navajo Nation President Jonathan Nez was one of several tribal leaders who met with Haaland on her fact-finding visit. Nez said he was encouraged by Haaland’s willingness to meet with tribal leaders personally.

“This landscape is home to many historical and cultural sites, plants, water, traditional medicines, and teachings for our people. It also provided refuge for our people in times of conflict. One of our most notable leaders, Chief Manuelito, was born there, but it is more than that. Bears Ears is sacred, and it deserves to be protected,” Nez said, speaking about Bears Ears, Nez said.

In addition, conservation and environmental groups want Biden to restore the two monuments. During the 2020 presidential campaign, Biden stated he intended to restore protections to both.

On Friday, the last day of her first week back from Utah, Haaland issued two Secretarial Orders to prioritize action on climate change throughout the Interior Department and to restore transparency and integrity in the department’s decision-making processes.

The emphasis on climate change is welcome after the reckless disregard for Mother Earth during Trump’s single term as president.

We hope Haaland, in her recommendation to Biden, will recommend the restoration of the Bears Ears and Grand Staircase-Escalante National Monuments.