A Tribute to a Champion for Native Americans with Disabilities: We Lost Her Too Soon 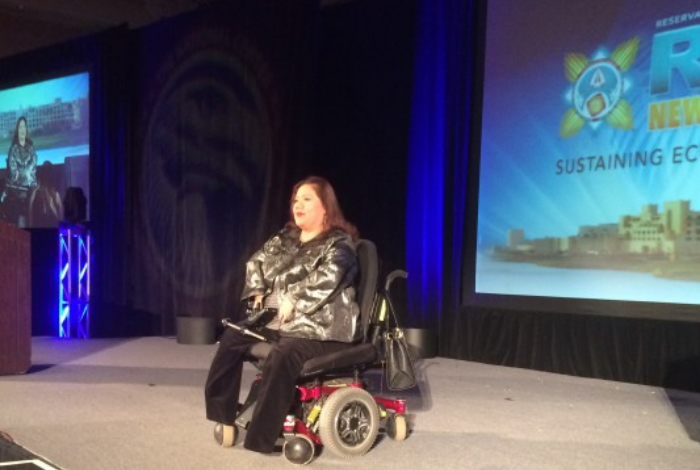 This past Wednesday, we lost one of the best advocates for Native Americans with disabilities in Indian Country. Cinda Hughes (Kiowa), well-known among circles in Washington, D.C., passed away from cancer on Wednesday. She was 59.

I first met Cinda, while I was employed by the Consortia of Administrators for Native American Rehabilitation (CANAR). Established in January 1993, CANAR is the foremost professional membership organization serving about 85 American Indian Vocational Rehabilitation programs in Indian Country. A mutual friend introduced Cinda to me at the National Museum of the American Indian in Washington.

A few months later, I was part of a CANAR interview team as the organization sought a legislative affairs coordinator. On a trip to Washington, I was tasked with interviewing Cinda for the position. She and I met for breakfast at a diner for the interview. She was already waiting for me when I arrived. She maneuvered her electric wheelchair through the crowded diner following the hostess.

It took less than 90 seconds for me to determine I would recommend her for employment to the executive director, as I had already seen her extensive resume.

Born with a congenital defect in rural Oklahoma, she told me her life story including how she ended up living in metropolitan Washington, D.C. Cities are more accessible for people with disabilities than rural towns or tribal communities in Oklahoma where there are few provisions for those who depend on wheelchairs, she explained.

Growing up in Anadarko, Okla., she was highly influenced by her Kiowa grandparents. She developed a strong will to succeed and was the first American Indian student president in her high school. Upon graduating from high school, she attended Brigham Young University and the University of Oklahoma.

As a quadriplegic, Cinda had a difficult time finding full-time employment. As a result, she volunteered at numerous non-profit organizations working on behalf of those with conditions like hers.

Finally, she landed a job at the Oklahoma State Senate, where she became a research assistant.

I saw her resume listed several jobs in Washington, D.C. It included working as a legislative associate at the National Congress of American Indians (NCAI), the U.S. Dept. of Labor, the U.S. Social Security Administration, and the U.S. Dept. of Commerce in the Office of Congressional and Intergovernmental Affairs as the tribal affair liaison.

She explained that some federal agencies seemed to always find an excuse not to keep her employed as the probationary period was about to expire.

Once at CANAR, I learned more about Native Americans with disabilities from Cinda than had I would have from taking a graduate course. Being a quadriplegic, Cinda knew firsthand the obstacles she faced, such as having few resources to fix her electric wheelchair when it would break. She typed on her laptop computer with a pencil clenched between her teeth.

I soon learned that her electric wheelchair served as her legs as she navigated the nation’s capital advocating on behalf of Native Americans on Capitol Hill and federal agencies.

Her brilliance, drive and determination surpassed any physical constraints.

Of all her achievements, one stands out. In 2004, she became Miss Wheelchair America, representing the state of Oklahoma. Soon after winning her title, Cinda reached out to Macy’s. She wanted to be included to attend their retailer’s famous Thanksgiving parade. She wanted to be there with Miss America, Miss USA and Miss Universe as parade guests. The answer from Macy’s was no.

Not willing to take a no for an answer, Cinda solicited the assistance of her fellow Miss Wheel America contestants. The women assisted her by sending Macy’s emails. She also got some American Indian organizations, as well as the Association of Persons with dis(ABILITIES) to participate in the email campaign.

The email campaign worked. Cinda received a call from the Macy’s vice president who personally invited her to come to New York to view the parade on Thanksgiving. Cinda, accompanied by her brother, viewed the parade from inside Macy’s VIP section. On that day, Miss USA rode a float in the parade. Misses Universe and America did not show up for the event.

While at CANAR, Cinda invited a close friend, who happens to be Kenny Lee Lewis of the Steve Miller Band, to perform at the organization’s annual conference. He came without charging for his performance.

After Cinda passed away I reached out to Lewis, who sent me back a beautifully written tribute to his friend entitled “My sister has flown.”

He wrote these words about Cinda:

“She was simply born naturally with extreme atrophy of her arms and legs, which were diminished and basically useless. But this was from the touch of the Creator. This was the forging that tempered her steel and made her the amazing person that she became in life. Her handicap made her a shield maiden, a warrior of light. A soul survivor.”

Her mother told our Native News Online reporter, Jenna Kunze, on Friday that their family’s motto was: “win some, lose some, some get rained out, but you show up to play them all.”

“Cinda treasured her advocacy work that took her through the halls of Congress, the White House and government agencies meeting with officials,” said Nedra Darling. “She was a power house whose legacy reaches beyond Indian Country! Cinda Hughes stood taller than most because she captured our hearts with her Kiowa pride, her laughter, and her fierce determination to make this a better world for people with disabilities. We lost a great warrior.”

I hope her life’s work will live on and more funds will be made available for almost one-million American Indians with disabilities across Indian Country.

One thing I discovered through my interactions with Cinda is she understood where disability funding was lacking for American Indians. Her vision far exceeded funding availability. I hope is her lifelong dedication to help the disabled will pave the way for Indian Country's tribal leaders and other decision-makers to realize more needs to be done for those afflicted with disabilities.