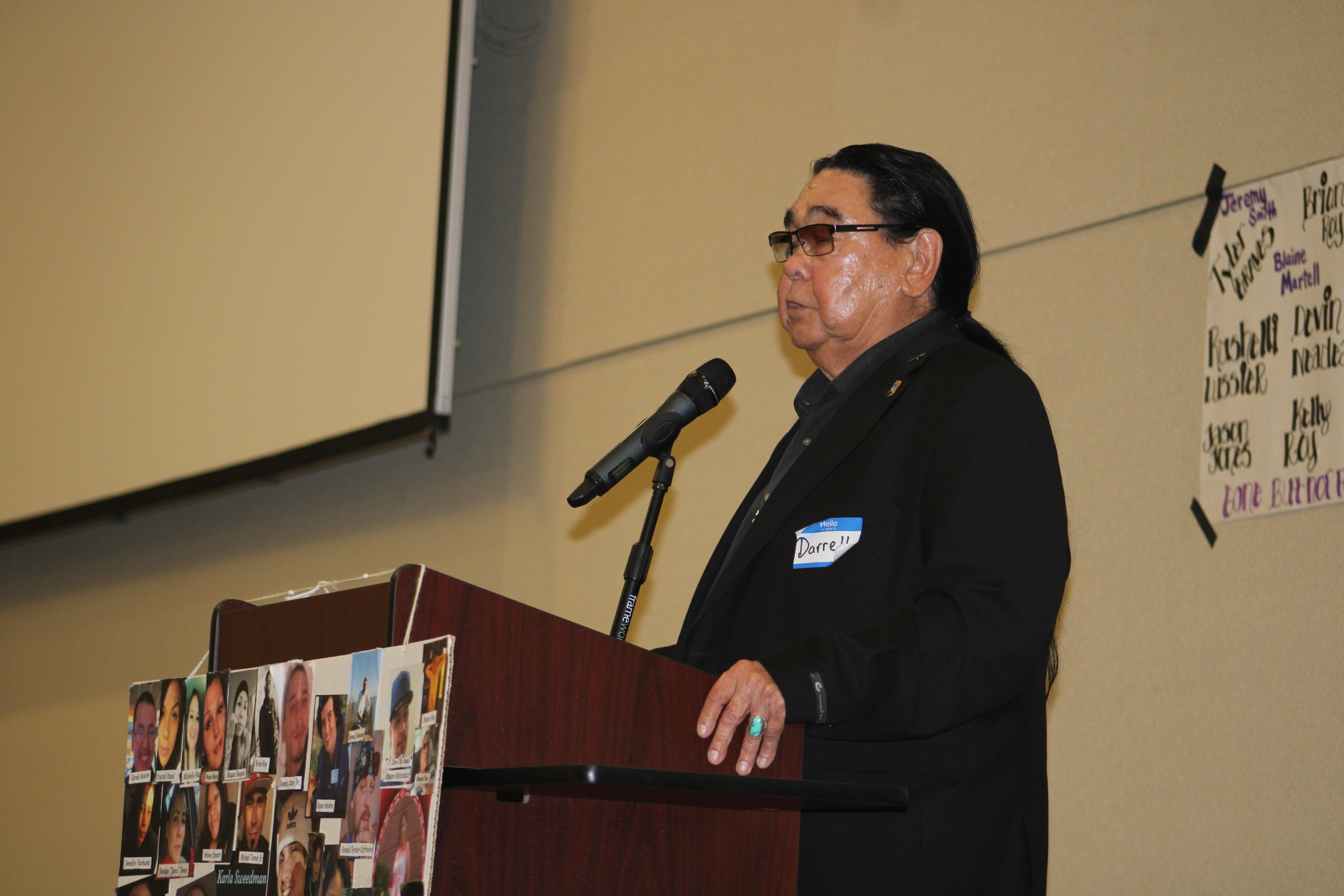 BEMIDJI, Minn.—Tribal leaders, city officials and individuals in active recovery were among the speakers yesterday during the 2nd annual Opioid Awareness Response Gathering at the Sanford Center in Bemidji. The 3-hour event was organized by Northwest Indian Community Development Center’s Ombishkaa Re-Entry Program to raise awareness of the opioid epidemic impacting the community.

“This crisis, it’s everyone’s issue, not just reservations,” Seki said during the gathering. “It surrounds our community, and when I visit other communities, they tell me the same thing.”

“One area we are lacking is a detox facility,” Seiki said. “We are planning to fulfill this need through the construction of a mental health crisis unit, which we envision as a temporary facility where individuals who are experiencing a crisis involving opioids and mental health issues can be safely treated.”

Last year, Minnesota reported a record 1,286 overdose deaths — a 22 percent increase from 2020. The Minnesota Department of Health (MDH) issued a report in July 2022 that stated that most overdose deaths in 2021 were associated with fentanyl.

According to MDH statistics, Native Americans were seven times more likely to die of drug overdose than Whites.

“The unfortunate reality is, overdoses in our area have doubled every year since 2017,” Mastin said during Wednesday’s event. “This year, we’re already at 73 overdoses just within the city limits and that’s what we know about.”

“Our efforts are to focus on those bringing drugs into our communities, not on those who are addicted,” Mastin said.

According to Mastin, the Bemidji City Police Department is pursuing a grant from the Office of National Drug Control Policy (ONDCP) to classify the region as a High-Intensity Drug Trafficking Area (HIDTA).

Currently, there are 33 HIDTAs located in 50 states, as well as in Puerto Rico, the U.S. Virgin Islands, and the District of Columbia. If awarded the grant, Bemidji would be eligible for significant increases in financial, technical and human resources to combat drug trafficking.

The Red Lake Opioid Awareness Response Gathering also featured speakers sharing their experiences with drug and alcohol treatment. All touched on the stigma, or misunderstanding, of addiction.

“In recovery, things aren’t always perfect,” said Curtis Jackson, Leech Lake Ojibwe, whose addiction started when he was prescribed pain medication while playing college baseball. “It wasn’t long after I started (using) that I started feeling like I was on top of the world. When my prescriptions stopped, I started to seek something stronger on the streets, and before I knew it, 14 years went by.”

Jackson has been in recovery since 2016, when he was sentenced to wellness court, a program specifically designed for drug offenders and non-violent criminals to help reduce substance abuse in the community and enhance public safety. The Itasca County Wellness Court is one of only two drug courts in the nation that have a Joint Powers Agreement with a Tribal Court, which is the Leech Lake Band of Ojibwe.

“If anything, my testimony is to never give up,” Jackson said.

Mayor Prince concluded the evening’s event by challenging the other attendees to come together to create solutions to stem the deadly opioid epidemic.

“How many more do we have to lose?” Prince asked the crowd. “Will there be 50 more faces next year? The answer to this is out here in this room. We can come together and figure this out. I was encouraged by the people we heard from, and if there’s one theme we’ve heard over and over, it’s that ‘someone loved me.’”

Editor's Note:  This story has been updated to include the event organizer's name.