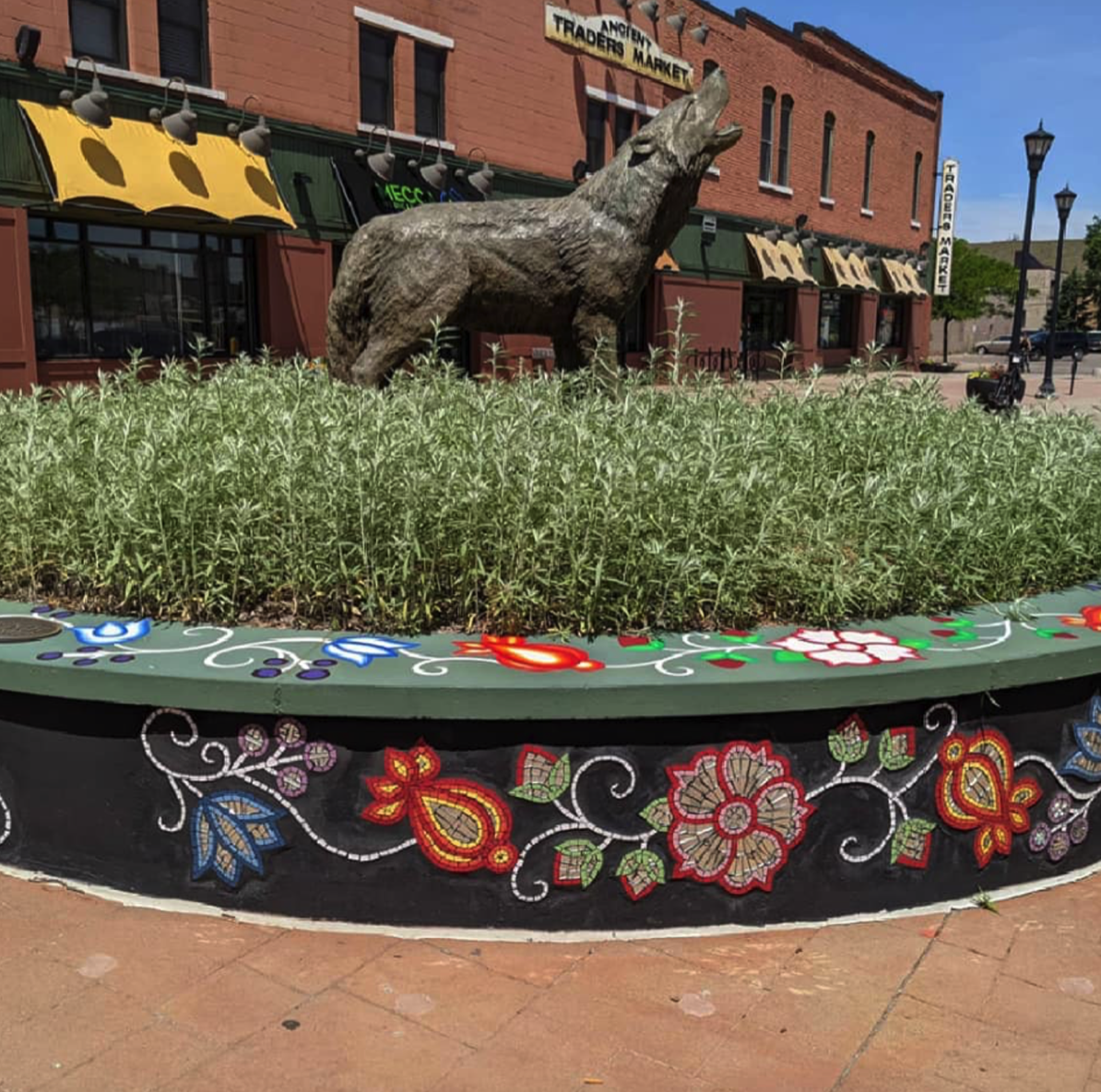 This is the first in a three-part series about Native-specific healthcare organizations and their fight to combat the COVID-19 pandemic by offering traditional healing alongside Western medicine.

In Indigenous cultures, knowledge is often contained within stories. Thus, to learn how Native American clinics used traditional healing during the COVID-19 pandemic, it makes sense to begin with sage.

At first glance, there’s nothing more to the plant than meets the eye.

Cradled in a garden bed outside South Minneapolis’ Native American Community Clinic (NACC), the strands of green and blue velvet blend into the cityscape.

Nevertheless, sage’s presence on Franklin Avenue in the city that birthed the American Indian Movement (AIM) means much more.

In Native American traditions, sage is a sacred medicine. To the Dakhota (Dakota) people and the Ojibwe people -- who make up the majority of NACC’s clientele -- the plant is called Phezihota and Bashkodejibik, respectively.

Beyond being a powerful antibacterial, sage is a harmonizer that removes negative energy when burned and smudged over the body, according to Dakota and Ojibwe knowledge.

“They are plants that made that commitment at the beginning of creation to help us,” Donna La Chapelle, an Ojibwe-Dakota woman, said. She identified the Four Sacred Medicines: sage, cedar, sweetgrass and tobacco. “They are powerful teachers.”

Before NACC received a grant from the Minneapolis Foundation’s Fourth Generation Fund in 2018 to plant a full medicine garden, La Chapelle planted sage outside the clinic herself. As NACC’s Elder In Residence providing spiritual guidance, she continues her 50-year tradition of using the medicine daily.

During the COVID-19 pandemic, traditional medicines have been a mainstay of relief efforts at NACC and other Native-led wellness organizations serving more than 9 million Indigenous people around the country.

To further self-determination in healthcare, Native-led wellness organizations work to create options for Indigenous people other than the Indian Health Service (IHS).

The IHS has historically been chronically underfunded due to fluctuating annual appropriations. In 2017, the IHS only spent $3,332 per patient while Medicare spent $12,829 per patient.

At NACC, traditional medicine-related programming during the pandemic has prioritized the medicine wheel, a cornerstone of their philosophy.

When applied to wellness, the wheel includes four quadrants -- mental, emotional, spiritual and physical -- which apply to different aspects of a person’s health.

“We believe that once one quadrant is askew, it affects the whole medicine wheel because they’re all related,” Renee Beaulieu-Banks, a member of the Leech Lake Band of Ojibwe, said. Beaulieu-Banks works alongside La Chapelle as an elder in residence. She said keeping the medicine wheel in balance is critical to the concept of mino-bimaadiziwin, the Ojibwe term for “a good life.”

The pandemic quickly threatened the community’s physical health, with Native American and Alaska Natives overall being some of the most impacted populations in the country.

The IHS reported in November 2020 that Indigenous populations had 3.5 times the infection rate and four times the hospitalization rate of non-Hispanic white Americans. Elders, in particular, bore the greatest risk during COVID, creating a cultural crisis for some tribes due to the role many elders play as knowledge-keepers.

Clients interested in the clinic’s traditional medicine-related workshops could sign up online and receive kits in the mail with all supplies necessary to follow along with the demonstrations. These supplies included sacred medicines and all relevant “ingredients” to the task at hand.

The online workshops and supplies, supported by $200,000 in grant funding, were an instant success, according to Sarah Andersen, grants manager for NACC:  “We sold out on attendance every time.”

“If people caught COVID, they could use that to help [with] breathing, and just in general if they caught a cold, it could help soothe breathing,” NACC operations manager Ashlee Jallen said about the salve.

The workshop was followed by another class in June 2020 to make immune boosting teas and elderberry elixirs. Native people have long had a relationship with elderberries, using the plant to treat fevers. According to the National Center for Complementary and Integrative Health, research suggests that elderberries may relieve flu symptoms, which can manifest in COVID-19 cases.

While the pandemic presented new challenges for the clinic, NACC was well-prepared.  The clinic has blended an Indigenous traditional healing model with a Western biomedical one since it opened its doors in 2003.

Alongside mental, dental, and behavioral health services, the clinic also provides opportunities to meet with La Chapelle and Beaulieu-Banks in-person, to smudge and engage in ceremony.

This past spring, NACC traditional healing coordinator Anita Tapio organized a jingle dress-making class for Native women in the community.

Though pow wows are mainly for socializing purposes, the jingle dress dance is a form of medicine. It was created in response to another historic pandemic – the 1918 Spanish Flu – which spread to roughly one-third of the world’s population.

In the class, Tapio witnessed the healing power of cultural connection.

“There was a lot of crying,” she said. “Some of the women had never had their own dress or been able to dance, and always had to sit on the sidelines.”

According to Indigenous medicine scholar Kenneth Cohen, Western medicine -- the standard strategy of care in the U.S. -- and Native American medicine have contrasting methodologies.

In Honoring the Medicine: The Essential Guide to Native American Healing, Cohen explains that Native American medicine understands diseases to be complex and impact the whole medicine wheel. Nevertheless, biomedicine’s reductionist philosophy views illness as strictly biological and isolated on the body.

Jallen (Anishinaabe) from the Red Lake Nation, said there remains a necessity at NACC to integrate both methods given the current state of Indigenous communities.

According to a 2019 IHS report, Native Americans and Alaska Natives born today have a life expectancy of 5.5 years less than other races in the U.S. Compared to other groups, they die at higher rates from diabetes and chronic lower respiratory diseases.

Though the IHS cites possible causes of these disparities being “inadequate education” and “disproportionate poverty,” emerging academia asserts that the root causes go back even further to colonization.

A 2018 paper in the Journal of Indigenous Social Development explains a model of colonialism as a health determinant in Canadian Indigenous populations. Researchers found Anishinaabe past articulations of health to illustrate a hunter-gatherer lifestyle centered around natural foods. Today, Western sedentary lifestyles have led to limited exercise and poor nutrition, many speculated.

“I think that our ways of life have been interrupted with colonization,” Beaulieu-Banks said.

She emphasized that she doesn’t mean this disrespectfully, but instead uses the reflection to identify Indigenous healing’s importance. “We can’t rely on Western medicine because that’s kind of the reason why we are where we are.”

A legacy of abuse within Western medicine has fueled Indigenous hesitation related to the COVID-19 vaccination, according to NACC chief executive officer Dr. Antony Stately.

An enrolled member of the Oneida Nation of Wisconsin and a descendant of the White Earth and Red Lake nations, Stately said Indigenous people must exercise “caution and judgment.”

In 2000, Hunkpapa/Oglala Lakota professor Maria Yellow Horse Brave Heart conceptualized historical trauma as it relates to Lakota history. She attributed “cumulative wounding across generations” to sources of trauma, including the over 150-year long abuse of Native children in government-sponsored boarding schools.

“Even if we don’t necessarily have those experiences, we have stories that remain in our families and in our communities,” Stately said.

App’s final paper as a graduate student at Saint Mary’s University of Minnesota, titled “The Use of Holistic vs Standard Methods for Treating Native Americans Impacted by Historical Trauma,” shares her observations.

“I found the majority of my clients had experienced some form of trauma in their lifetime,” she said. “Many of them had mental illness diagnoses; usually MDD [major depressive disorder], GAD [Generalized Anxiety Disorder], Panic Disorder, or PTSD [post traumatic stress disorder].”

The first day the clinic launched their vaccine-roll out, he said Native elders were invited to pray over the medicine and ask it to protect the community.

“We knew that starting from a place of prayer and asking the Creator and our ancestors to be here at this moment in time to help us through this process was an important thing,” Stately said.

This is just one example of the much larger goal at NACC to center traditional medicine as a way to foster community connection.

“I think a lot of other programs start with Western medicine and start with foundational principles of colonial practices and then kind of invite culture in as a side dish,” Stately said. “We have really talked a lot at the leadership level and at the practitioner level about ‘how do we start with culture?’”

This article has been updated to remove incorrect information about Linda Black Elk's tribal affiliation. We regret the error.