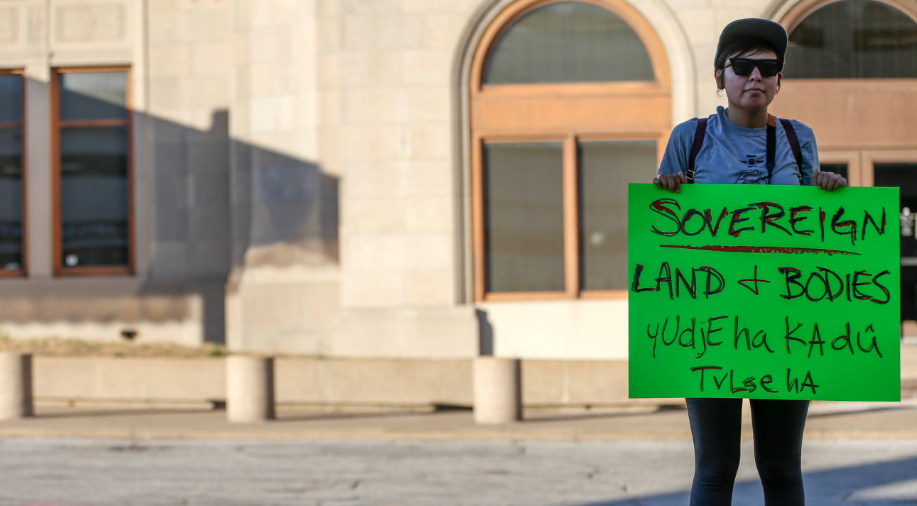 Editor's Note: This article was originally published by Mother Jones. Used with permission. All rights reserved.

Federal and state abortion restrictions have been interfering with tribal sovereignty for years.

Since the Supreme Court decision overturning Roe v. Wade in June, millions of people have faced new barriers to abortion access: increased wait times, longer distances to travel, and in many cases, an inability to access the procedure altogether. But for many Native people, especially those living on reservation land, these kinds of obstacles feel especially familiar.

“It is sad to say that we’re kind of used to these types of policies being passed and implemented,” says Krystal Curley, who is Diné and the executive director of Indigenous Lifeways, an Indigenous health and social justice group. “Now it’s the whole US that’s going to have to experience what we’ve been experiencing…and it’s traumatic.”

Native American tribes are sovereign nations that have a government-to-government relationship with the United States. Tribes have the right to make many laws on their land and for their citizens—and in theory, that right applies to making decisions about health care, including abortion. But in practice, decades of state and federal laws have limited tribal nations’ ability to provide reproductive health services, leaving Native people with disproportionate barriers to abortion access. In a post-Roe world, the obstacles to abortion access on tribal land have only gotten greater. For advocates like Curley, the ruling feels like just the latest escalation in a centuries-long attack on bodily and tribal autonomy.

“We’ve been under these genocidal policies for 500 years,” Curley says, pointing to a legacy of violence that began with the use of rape as a weapon against Native women during colonization. Since then, federal and state governments have spent decades trying to control Native people’s decisions about their families and reproductive health—from forcibly removing Indigenous children from their families to the Indian Health Service’s forced sterilization of Native women in the 1970s.

“America has always been after our natural resources, and one of the ways that you go about doing that is to target Native women, because we bring forth the next generation,” says Charon Asetoyer, executive director of the Native American Women’s Health Education Resource Center, who is Comanche. “If you can sterilize or control our fertility, you can control our population. The agenda is the same: harvest our natural resources.”

Today, federal government restrictions continue to limit Native people’s ability to access reproductive health services. That’s in large part because more than half of American Indian and Alaska Native people access health care through the severely underfunded Indian Health Service, which was established by a combination of treaties and legislation as partial payment for millions of acres of Native lands. Because IHS is a federal agency, the 1976 Hyde Amendment prohibits it from funding abortion. “They decide what is best for us,” says Asetoyer, who has been advocating for a repeal of the Hyde Amendment since the Obama administration. “It’s really very paternalistic.”

Although IHS is technically allowed to perform abortions in cases of rape or incest, research has found that most of its clinics don’t. The only comprehensive report on the issue is a 2002 study from Asetoyer’s group that found the IHS system performed only 25 abortions between 1976 and 2002.

Smaller reservations typically have just one IHS or tribal clinic, and on larger reservations, clinics can be spread hundreds of miles apart. For the 22 percent of Native people who live on reservations, that often means leaving tribal lands and traveling hundreds of miles to get care. Since 2020, the New Mexico-based abortion network Indigenous Women Rising has seen about one-third of its calls coming from Oklahoma, which is more than 40 percent reservation land and had some of the nation’s strictest anti-abortion laws even before Dobbs. The group has helped people travel as far as Granite City, Illinois—at least a six-hour drive from Tulsa—for an abortion, says IWR’s executive director, Rachael Lorenzo, who is Mescalero Apache, Laguna Pueblo, and Xicana. Since Dobbs, those long trips have only gotten more common for pregnant people in Oklahoma. In July, Indigenous Women Rising ran through its allotted abortion fund for the month in just three weeks. And Oklahoma is just one of several states with vast federally recognized reservations, including both Dakotas and Utah, that have enforced or are trying to enforce total abortion bans this year.

Ever since news of Justice Samuel Alito’s opinion leaked this spring, the issue of abortion on tribal lands has attracted national attention. In Oklahoma, Republican Gov. Kevin Stitt warned that the state would be “watching” tribal nations, who, he claimed, are “super liberal” and will “try to set up abortion on demand.” Similarly, non-Native activists on the left have speculated that sovereign tribes could set up clinics on their land as a way to evade state abortion bans. 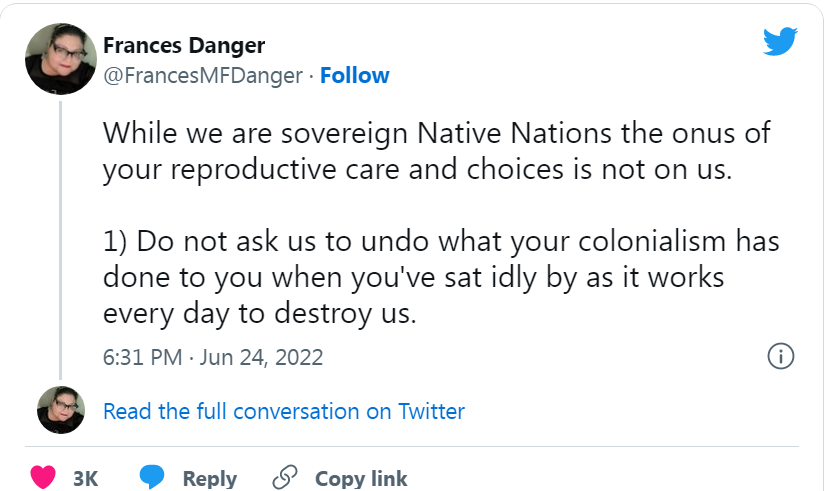 But in reality, no tribes have announced plans to offer “abortion on demand.” A complex web of criminal, civil, and state laws would make that an “uphill battle,” says Alex Pearl, a tribal law professor with the University of Oklahoma and enrolled member of the Chickasaw Nation. Suppose that a tribe or a Planned Parenthood managed to set up an abortion clinic on reservation land without using federal funds. Under current federal law, states likely wouldn’t be able to prosecute a Native abortion provider who performed an abortion on a Native patient, Pearl says. But fewer than 0.5 percent of registered physicians in the United States are Native American. And the situation becomes more complicated when non-Native doctors and patients are involved.

That’s partly because, just days after the Dobbs decision, the Supreme Court struck a blow to tribal sovereignty with its ruling in Oklahoma v. Castro-Huerta. The court held that states have the authority to prosecute non-Native people for committing crimes against Native people on tribal land. That means that, in a state where abortion is criminalized, any non-Native doctor could likely be prosecuted for performing an abortion on a reservation.

Beyond that, it’s possible that states like Oklahoma could revoke doctors’ licenses for performing abortions, says Aila Hoss, a professor of health and federal Indian law at the Indiana University. Oklahoma and many other states can revoke state licenses for “unethical and unprofessional conduct,” Hoss says, including for violating criminal laws—even if the doctor isn’t convicted.

Even if tribes were to overcome the legal hurdles, it would be a mistake to take it for granted that they would want to set up clinics on their land, Pearl says. “Tribal communities are not monoliths,” he says. “There are cultural norms, religious views, that are not always going to track the American left-right, conservative-liberal political dichotomy.” Native tribes hold varying beliefs about when life begins. For some, a combination of tribal traditions and the influence of Christianity lead to the belief that life begins closer to conception. At the same time, abortion care has been a practice in many nations since time immemorial. As a Diné woman, Curley says, she grew up learning that bodily autonomy was to be respected, and that she alone should decide when to give birth. If someone needed to terminate a pregnancy, they did so in a holistic ceremony that included care before and after the abortion.

Despite the current threats to abortion access, the Native activists Mother Jones spoke with say they’re hopeful that more comprehensive reproductive care will eventually be available on tribal lands. Activists are lobbying to change laws while also revitalizing traditional maternal medical care. But “those are conversations for us as Indigenous people to have among each other without the influence or the feeling of urgency from white feminists,” says Lorenzo of Indigenous Women Rising. “And our timeline is not the same as white people. We have so much more to consider around our culture, our language, our tradition.”


The Native News Health Desk is made possible by a generous grant from the National Institute for Health Care Management Foundation as well as sponsorship support from RxDestroyer, The Leukemia & Lymphoma Society and the American Dental Association. This grant funding and sponsorship support have no effect on editorial consideration in Native News Online.
About The Author
Author: Emily HofstaedterEmail: This email address is being protected from spambots. You need JavaScript enabled to view it.
Breaking News