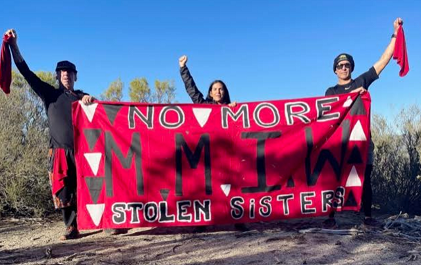 Hundreds are expected to gather on Sunday, Feb. 20, for a Red Tipi Healing Ceremony in Chula Vista, Calif. in San Diego County for songs, dancing and blessings. The event is planned to honor missing and murdered Native Americans.

Sunday’s event will conclude four days a praying, running, marching to bring awareness to the Missing and Murdered Indigenous Women/Relatives (MMIW/R) epidemic. The event begins at noon and will conclude at 3:00 p.m. - PST.

Organizers have billed the event as “7 Peaks for 7 Sisters,” in recognition of seven families whose relatives have gone missing or have been murdered..

The event kicked on Thursday with a three-day run that visit seven peaks throughout occupied Kumeyaay ancestral homelands in San Diego County to represent seven Indigenous women who have gone missing in Indian Country.

During the Red Tipi Healing Ceremony, members of other families will be able to come forward in a circle to tell their untold stories of missing and murdered in their families.