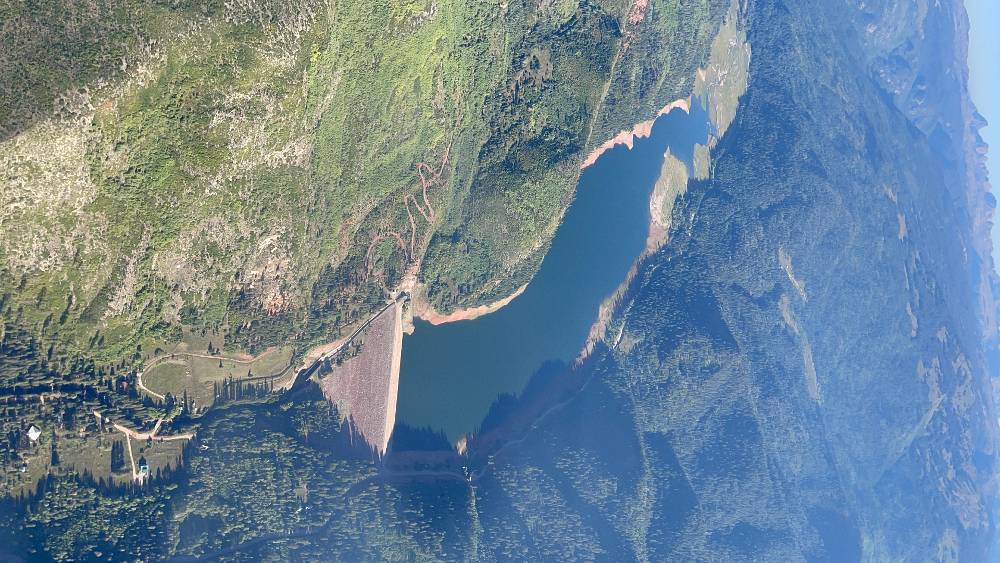 Lorelei Cloud felt the thrum of the propeller as she leaned back to look out the window of the small plane, flying over the Southern Ute Reservation and southwest Colorado. The rivers that sustain agriculture, ecosystems, and millions of people stretched out before her. She saw signs of long-term drought–low water in the Vallecito Reservoir, which the tribe depends on for irrigation. She also got a clear view of a logistical problem she works to solve as a member of the Southern Ute Tribal Council and the Water and Tribes Initiative.

“Lake Nighthorse, the newer reservoir, we have substantial water rights to this… but we don't have infrastructure in place,” said Cloud. “Knowing that body of water is there, and it sits on our driest side of our reservation, and we're not able to use it. That, to me, is sad.”

Cloud’s flight was the first in the ongoing Colorado River Basin Overflight Project. The project is a response to dwindling water in the Colorado River system and tribal nations calling for more Indigenous leadership in water management.

The project is a series of flights conducted by Planet Women, an environmental-conservation nonprofit, to photograph the basin from the headwaters in Wyoming to the irrigation canals in Southern California. The group wants to support gender equity and racial equity in environmental leadership, so it is pairing women and nonbinary pilots with passengers who are Indigenous women leaders and Native youth storytellers.

While there already are aerial photographs of the basin, Planet Women CEO Kristine Ziegler said the project’s power lies in women, who are under-represented in environmental conservation decision-making, “working together to understand their lands and waters and use that as a platform for storytelling.”

The stories the Indigenous women who take these flights are telling are as diverse as the 30 tribal nations that live in the basin, but they are tied together by the themes of drought and exclusion from river management.

The Colorado’s basin covers seven U.S. states and portions of northwestern Mexico, and it is a vital source of irrigation and drinking water for 40 million people. However, due to drought, rising temperatures, and increased demand for water in the region, reservoir levels and river flows have fallen to historic lows in recent years, according to the U.S. Geological Survey. The USGS estimates that the river system’s “baseflow,” the movement of groundwater into the streams that feed it, could decline by a third in the next 30 years.

In April, the nonprofit American Rivers named the Colorado the U.S.’s most endangered river. “The river is so over-tapped that it dries up 100 miles from its mouth at the Sea of Cortez,” it said in its 2022 report. Social inequities compound the problems climate change is causing, it added.

“This ‘new abnormal’ is seriously impacting the environment and economy from the headwaters to the sea,” the American Rivers report says. “Furthermore, many tribal nations across the basin suffer from a lack of modern water infrastructure to deliver water to their people, due to systemic racism and historic disinvestment. Historically, tribes have been excluded from major river-management decisions, despite having some of the most senior water rights across the basin.”

Some tribal nations, like the Navajo Nation, are working through state and federal courts to settle their water rights. But even the tribal nations whose water rights are established were left out of negotiations for the century-old agreement between states that governs the basin’s management, the Colorado River Compact. Neither were they consulted in 2007, when the states agreed to interim guidelines for operating reservoirs in drought conditions. Those interim guidelines are being renegotiated before they expire in 2026. Tribal nations urged that they be included, and this time many are participating in the decision-making process.

“To have the say on how they're going to use their water… helps tribes to bring economic development to the area, to bring water to their homes,” said Cloud. “With Ute people specifically, we value water, not just with money. It's more that spiritual value… It takes care of us. How do we take care of it?”

In the face of the global climate crisis and systemic inequity, it’s worth asking–what good can flights over the river system do?

Cloud was unequivocal. She said that the flight she took was useful in her advocacy because it gave her an experience that confirmed what she already knew intellectually about the rivers and reservoirs on and near Southern Ute lands.

The Colorado Basin Overflight Project has made six flights with passengers so far. It is planning several more flights this summer, as well as a creative-writing workshop to facilitate sharing the experiences and photos.