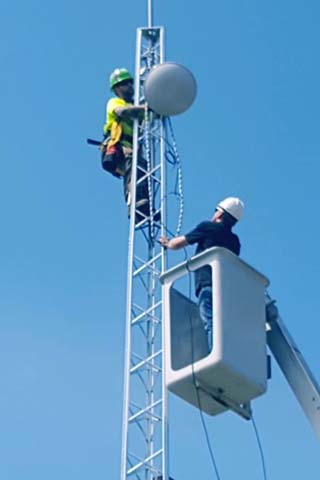 Today, the White House announced nearly $10 million in funding awards from  the Departments of Commerce, Treasury, and Agriculture that will be leveraged to expand access to affordable, reliable, and high-speed internet services to Tribal Nations.

Last year, Congress authorized the Emergency Broadband Benefit Program, part of the Consolidated Appropriations Act of 2021, which provides $1 billion in COVID-relief aid funding for tribal broadband, to be administered by the National Telecommunications and Information Administration (NTIA).

The pool of funding announced today includes some of that NTIA money announced last year.

“There will be more [funding] to come,” from that pool, Washburn said. “They're still going through 280 remaining applications. And then we have new money coming in.”

Washburn says in addition to the $1 billion provided for via NTIA, there is an additional $2 billion more that was put into the bipartisan infrastructure law. “So we will see $3 billion go out ultimately through this program,” said Washburn.

There is also funding available as part of a $10 billion capital project fund from the Treasury Department. And there is money being distributed from the Commerce Department's economic development agency (EDA) and from the USDA’s Community Connect program.

Washburn expects the distribution of funding will pick up in early 2022.

“Every [federally recognized] tribe has the ability to get $167,000,” from the Treasury Department, says Washburn. This is money that tribes can use for the purchase of laptops and tablets for members.

According to a statement from the White House, the money for tribal Internet access announced today is being distributed as follows:

“It's a lot of different little grants to tribes. It also helps them to prepare… for planning and feasibility. We want every tribe to be ready for that money,” said Washburn. “This money is exciting… The need is great.”

The Treasury Department is continuing to review applications for the $10 Billion Capital Projects Fund and will announce additional awards on a rolling basis. Applications are still being accepted more information is available on the Department of Treasury’s website.

NTIA awards applications are now closed, but there is some discussion about opening them back up. Native News Online will do our best to announce when/if application opportunities re-open.