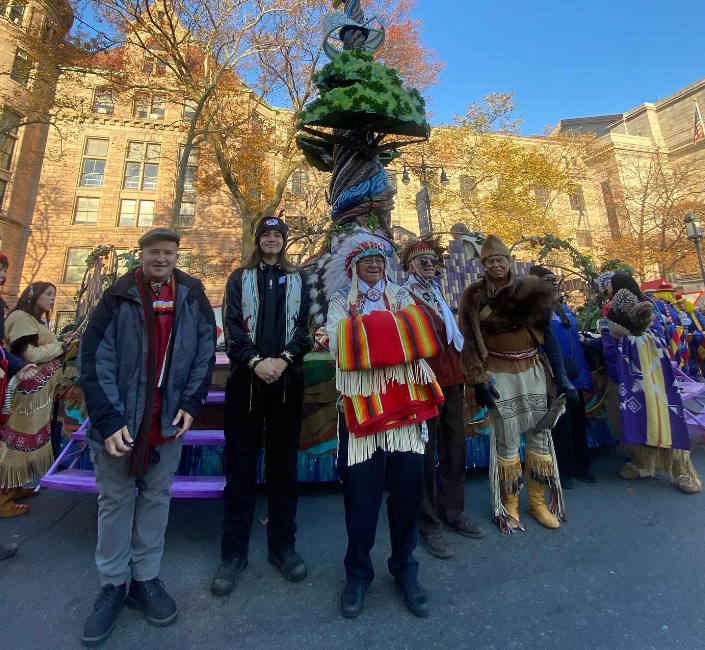 Three million people lined the parade route to watch the 2022 Macy's Thanksgiving Day Parade in New York City this morning. The large crowd viewed the Wampanoag Tribe’s “People of First Light” float that debuted in the parade. Millions others viewed historic parade on television on NBC.

The float was designed to tell the story of resilience, tradition and enduring vibrant culture. The float’s pathways symbolize the colors of the four directions. The Eastern Pine tree is adorned by wampum shells of the water and surrounded by sweetgrass, sassafras, and wild berry plant relatives.

Sitting in a place of honor atop the float were several elders from the Wampanoag Tribe of Mashpee in Cape Cod, Massachusetts.

The “People of First Light” float was a collaboration between Joey Ammons and Wampanoag artist Julie Marden.

Indigenous Direction co-founders Larissa FastHorse (Sicangu Lakota) and Ty Defoe (Oneida and Ojibwe) are committed to cultural protocols and ways of looking at the world that have existed on this continent for centuries. Rounding out the team, Associate Consultant and Project Manager for Indigenous Direction: Jamelyn Ebelacker (Santa Clara Pueblo), and Community Liaison, Siobhan Brown (Wampanoag).