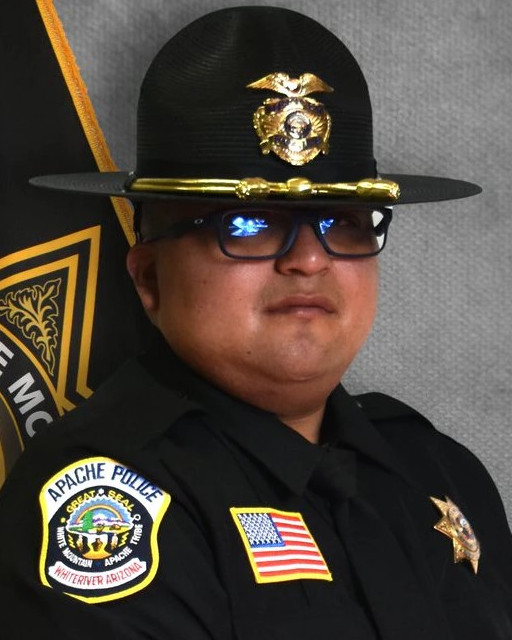 White Mountain Apache police Sergeant Lonnie Thompson, 29, was also injured during the gun battle. He was taken to a hospital in Phoenix, where he was in stable condition with non-life-threatening injuries.

The traffic stop occurred about 7 p.m. local time when Officer Lopez pulled over a vehicle on the reservation, according to Navajo County Sheriff's Office Chief Deputy Brian Swanty.

During the stop near downtown Whiteriver, Ariz., an altercation ensued between Officer Lopez and the suspect who has been identified as 25-year-old Kevin Dwight Nashio. Nashio allegedly shot the officer, who died at the scene. Nashio then stole the tribal police vehicle and fled for approximately 40 miles in a high-speed chase with officers from numerous law enforcement agencies in pursuit.

Nashio crashed the police vehicle into a tree in a remote area of the Fort Apache Indian Reservation. A shootout then began, which resulted in the injuries to Sgt. Thompson. Nashio was shot and killed.

Velasquez ordered all flags on the Fort Apache Indian Reservation to be flown at half-mast until further notice.

Officer Lopez, who transferred from the Wind River Indian Reservation in Jan. 2022, is survived by his wife and a child.

On Friday, Navajo Nation President Jonathan Nez visited the White Mountain Apache community to offer his support and condolences to the family of Officer Lopez. Nez also met with White Mountain Apache Chairman Kasey Velasquez and police officers to offer a prayer for protection and healing. He also encouraged the officers to seek counseling and healing resources as they grieve and spend time with family over the weekend.

“Our hearts go out to Officer Lopez’s wife, son, the White Mountain Apache Police Officers and community,” Nez said.  “The Navajo Nation stands with our brothers and sisters of the White Mountain Apache Tribe as we grieve the loss of a warrior and protector of the people. When called upon, Navajo Police Chief Daryl Noon did not hesitate to mobilize and send officers to provide public safety support for the community of Whiteriver.”