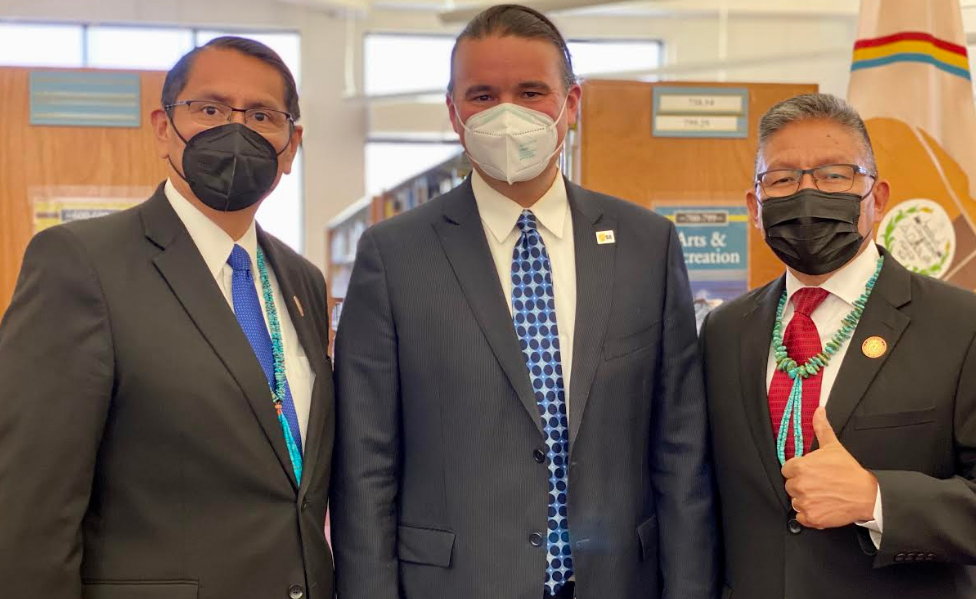 When the announcement was made on Thursday, Newland, currently serving deputy, was on the Navajo Nation where he joined the entourage traveling with First Lady Jill Biden.

“We congratulate Mr. Newland on his nomination, and we are pleased to welcome him and First Lady Biden to the Navajo Nation,” Navajo Nation President Jonathan Nez said.

“With his extensive experience and knowledge, we are optimistic that he will work together with all tribes and partner with the Navajo Nation to advance new policies and policy changes that benefit our people and communities. We have a great working relationship with Secretary Haaland and we are happy to extend our welcome to Mr. Newland and we look forward to meeting with him on many issues. Congratulations to him and his family,” Nez continued.

“Indian Country is poised for investment and new opportunities for economic growth and the time is right for new leadership. We are ready to engage in initiatives that create a sustainable, inclusive, and strategic agenda for Indian Country. With Bryan Newland as Assistant Secretary for Indian Affairs, along with the first Native American Secretary of Interior, we will have that critical voice for our traditional cultures, our tribal economies, and the healing of our broken relationship with the federal government.”

“Bryan Newland is an outstanding pick to lead the Department of the Interior’s work with Tribes,” said Toni Stanger-McLaughlin (Colville), NAAF Director of Programs. “Newland's background as an attorney, national policy advisor, and Tribal leader have equipped him with a unique skill set that will allow him to be incredibly effective as soon as he is confirmed. A decade ago, when working across departments with Bryan, he was always receptive to Native American Farmers and Ranchers' needs and willing to facilitate work between the Department of Interior and the United States Department of Agriculture. Through his leadership, we can build stronger economies for everyone.”

"ATNI is grateful to the Biden/Harris administration for the appointment of the Bryan Newland to this important post within the Department of the Interior that is so crucial to the trust relationship with the Nation's Indian Tribes.  As a former tribal leader and public servant Mr. Newland knows the diverse needs and characteristics of the first people and how the federal government can best address them. We look forward to working with him and Secretary Haaland on making real progress on the actions  needed to truly honor the promises made by the U.S. to our ancestral leaders."

“Bryan knows first-hand the challenges we face, as well as the opportunities that lie ahead for us as sovereign governments,” said USET SPF President, Kirk Francis. “We know him to be fair, knowledgeable, and passionately committed to justice for our people and the advancement of the U.S.-Tribal Nation diplomatic relationship. At a time when America is reckoning with its past, Bryan is the right person to meet this moment and deliver meaningful change for Indian Country. On behalf of the USET/USET SPF family, I extend our congratulations and full support.”

“The president could not have selected a more deserving and experienced Native American to serve Indian Country,” Matthew Wesaw, chairman of the Dowagiac-based Pokagon Band of Potawatomi, said in a statement to Tribal Business News. “Bryan has shown, through his strong leadership, that he is more than capable to represent Indian Country in D.C. Bryan has done a tremendous job leading his community on both a national and state level. While being a young leader he has represented himself on behalf of Indian Country as a knowledgeable, skilled veteran of the protection of Native sovereignty. We look forward to his continued leadership.”

“As a recent colleague of mine being a fellow tribal leader here in Michigan, I am both proud of Bryan for his appointment to this prestigious position, and also optimistic that he can make a real difference in the lives of Indian people throughout the United States.”

“We’re excited that someone from our region is on a national platform for us. Like with Deb Haaland’s appointment, bringing Native Americans forward in the administration to deal with environmental and Native issues on a federal level is such an honor and well founded by the Biden administration. It shows a true spirit of sovereignty within our treaties.”