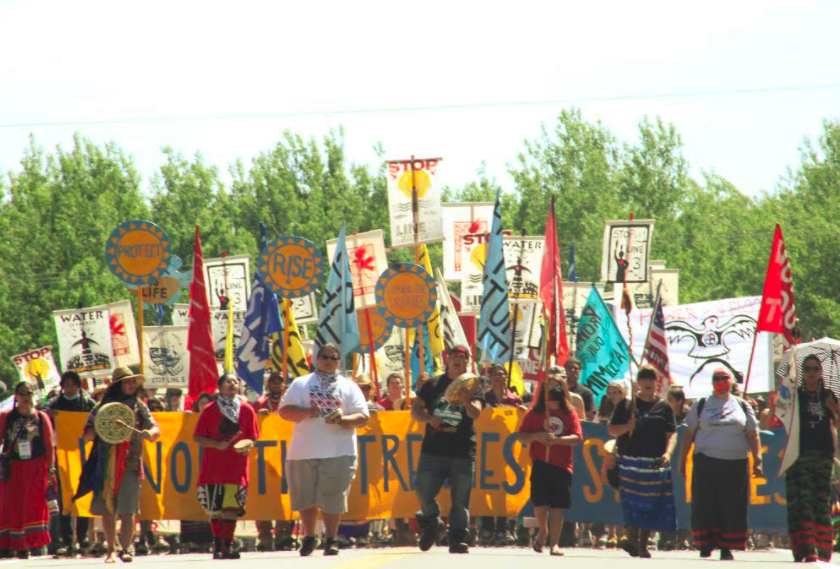 MAHNOMEN, Minn.—Thousands swarmed northern Minnesota over the weekend for the Treaty People Gathering, an event organized to stand against the ongoing construction of the Enbridge Line 3 replacement project. Crowds of well over 2,000 people gathered on Monday morning  at the headwaters of the Mississippi River for a treaty ceremony in the largest gathering yet against the pipeline since construction began in December 2020.

Indigenous-led groups, communities of faith, and climate justice organizations organized the Treaty People Conference, which organizers say marks the beginning of a summer of resistance.

“We have tried to stop this pipeline for the last seven years,” said Honor the Earth Executive Director and White Earth tribal citizen Winona LaDuke to Native News Online. “I join the White Earth Ojibwe Nation, the Red Lake Ojibwe Nation, Mille Lacs Band of Ojibwe, as well as environmental groups such as Friends of the Headwaters trying to stop this tar sands pipeline project.”

The new pipeline, which replaces the current, aging Line 3, would transport nearly 800,000 barrels of Canadian oil across northern Minnesota every day. If completed, the $9.3 billion pipeline would be the most expensive and largest tar sands pipeline in the world. According to Enbridge, construction is nearly halfway completed and is expected to be finished before the end of the year. The approved path of the pipeline crosses 22 waterways including the headwaters of the Mississippi River, and in the case of a spill, is too great for many tribal leaders.

The treaty ceremony at the headwaters, led by the RISE Coalition, was followed by remarks from the visiting celebrities alongside Bill McKibben, Dawn Goodwin, and Nancy Beaulieau. Participants are now holding space on the easement along the banks of the Mississippi, set up tents and are prepared to stay.

“The Biden Administration has the power to stop the advancement of Line 3,” said actress and activist Jane Fonda to Native News Online. “Biden can reexamine the permit and demand the Army Corps of Engineers to conduct a proper easement assessment, one that is more respectful to the Anishinaabe people.”

About 20 miles south of the action at the headwaters of the Mississippi River, over 500 people, allies, and celebrities shut down an active Line 3 pump station in a massive direct action in solidarity with the Giniw Collective. Some climbed ladders or locked themselves to equipment, while others blockaded the entrance, and held space. Law enforcement started arresting people at the pump station, but numbers of those arrested are not known yet. To date, at least 250 people have been arrested for actions against Line 3 since construction began.

On May 26th, more than 300 organizations submitted a letter to the Biden Administration calling for President Biden to direct the Army Corps of Engineers to immediately re-evaluate and suspend or revoke Enbridge’s Line 3 Clean Water Act Section 404 permit.

Analysis has shown that building Line 3 would unlock the emissions equivalent to building 50 coal plants.

Tribes and Honor the Earth have argued that Enbridge hasn’t proven there’s enough demand for the new Line 3. The Minnesota Court of Appeals is expected to issue a decision by June 21 on whether there’s a long-term need for the project in the state.

According to some, clean water can’t wait that long and pledged actions will continue to stop the pipeline.