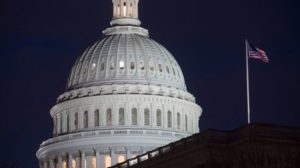 WASHINGTON — As of Wednesday night, the U.S. Department of Treasury has not released any of the $8 billion allocated to tribes in the Coronavirus Aid, Relief, and Economic Security (CARES) Act funds that were to be distributed to American Indian tribes “not later than 30 days” after March 26, 2020.

Three days later after the deadline, the tribes are still waiting for the much needed funds and the Treasury Department is not answering why they have not disbursed the money.

Tribes across Indian Country are hurting from the COVID-19 pandemic that has caused the shuttering of tribal casinos and huge reduction in revenue from tribal business enterprises.

On Wednesday, eight members of the House of Representatives sent a letter to Treasury Secretary Steven Mnuchin and Interior Secretary David Bernhardt to prompt the federal government to fulfill it trust obligations to the tribes by requesting the Treasury Department to immediately disburse the funds to tribal governments.

“The Congressional intent behind the CRF is to expedite relief funds to governments, including sovereign tribal governments, as part of the federal government’s larger initiative to provide emergency assistance throughout the country,” the members of Congress wrote. “As you are aware, the CARES Act was passed over a month ago, on March 27,2020, yet this funding has yet to be disbursed to tribal governments, in part due to litigation aimed at ensuring these resources go to the governmental entities that Congress intended.”

The litigation refers to lawsuits brought by more than a dozen other federally recognized tribes to declare Alaska Native Corporations ineligible to receive any of the CARES Act’s $8 billion. The case was argued last Friday before U.S. District Judge Amit P. Mehta in the District of Columbia Court, who ruled in favor the tribes on Monday.

During last Friday’s hearing, a Treasury Department attorney told Judge Mehta funds would be disbursed on Tuesday, which did not happen.

“Further postponement in disbursing these funds is unnecessary and works against the federal government’s trust responsibility to the 574 federally recognized tribal nations in the United States,” the letter concludes.