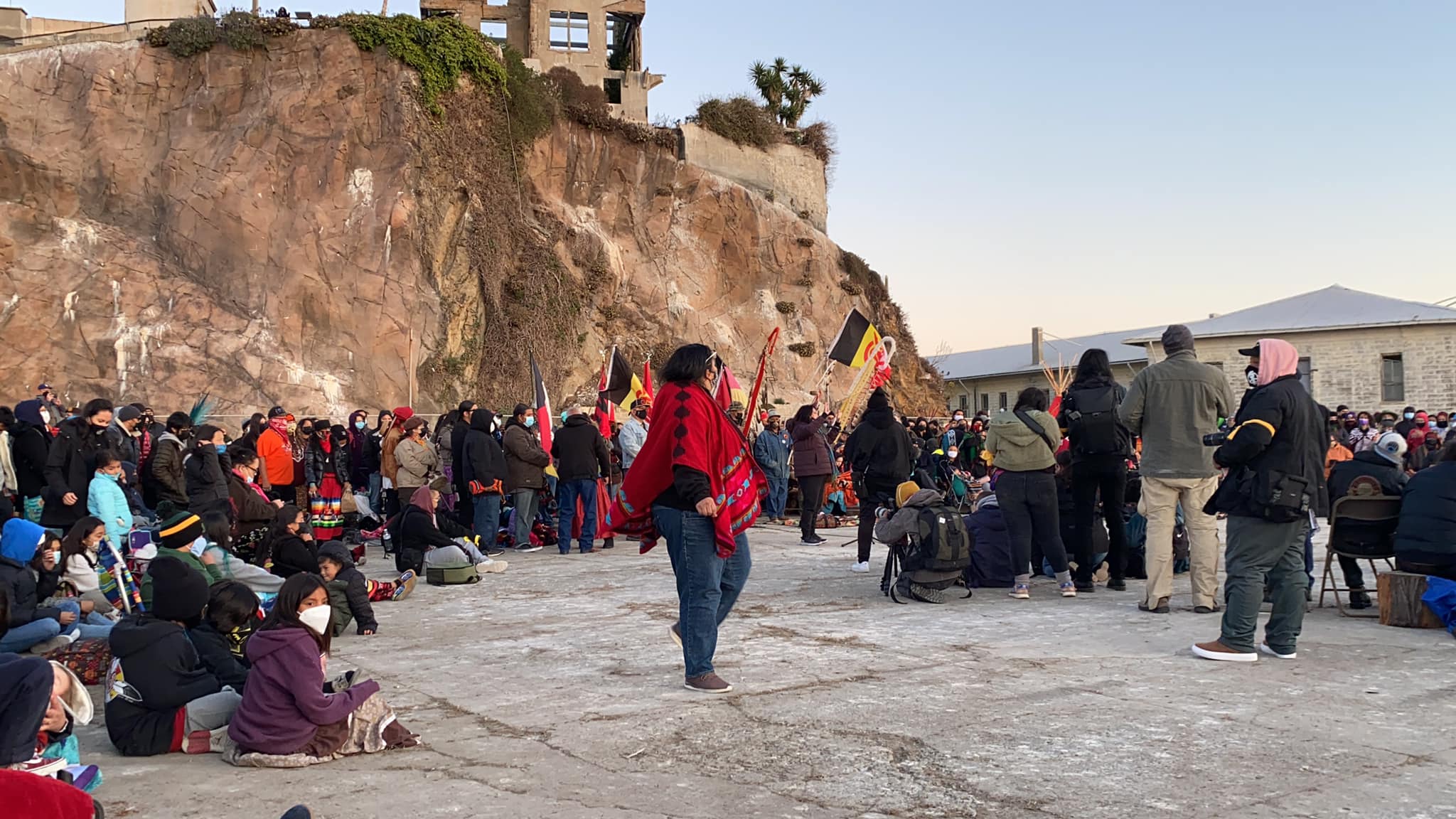 This annual event, hosted by the International Indian Treaty Council (IITC), began as an alternative to Columbus Day celebrations and, at the same time, to honor the occupation of Alcatraz from 1969-1971 by Indians of All Tribes, to protest forced assimilation, displacement, loss of land, language, and culture.

Representing the Ohlone Tribe, the tribe that inhabited the land of present-day San Francisco, was Gregg Castro (Ramaytush Ohlone).

"Welcome to the homelands of my people. At one time, we were almost gone. We now struggle to bring back our ceremonies, language and culture and are pleased to do so,” Castro said.

The event was emceed by Morning Star Gali (Ajumawi Band of Pit River), who told the crowd: "This is no longer a colonizer's holiday. Our creation stories come from our land and they will remain.”

Andrea Carmen, Yaqui, executive director of the IITC, welcomed all tribes with words of support and gratitude.

"Respectful greetings to each of you, my relatives. We want to remember that the first prisoners here on Alcatraz were members of California tribes who resisted the mission system. We want to honor them, and all tribes of Indigenous generations yet to come,” Carmen said.

Lisa Bellanger (Ojibwe) offered a song from the Ojibwe that reminded the crowd it is their responsibility to protect our water and protect our children. Translated, the song means, "Water we thank you, water we love you, water we respect you."

Several dance groups prayed for the earth, including Danza Azteca, Kumeyaay bird singers from Southern California, Round Valley Dancers from Covelo. Edwina Lincoln, the dance matriarch and teacher from Round Valley, said, "Good Morning to the sun, good morning to life. This is my family and we are Nomlaki, Wailaki, Yuki, and Pomo. No matter who we are, or whatever we do, we want the next seven generations to continue."

LaNada War Jack, who was one of the organizers in 1969 of the occupation of Alcatraz Island, was present and offered a prayer with Radley Davis.

This article has been updated.

Nanette Bradley Deetz (Dakota/Lakota/Tsalagi) lives and writes from the San Francisco bay area. She is a published poet, awarded a Lifetime Achievement Award for poetry and activism from the city of Berkeley, a tutor of California Community College, CSU, and UC systems, and a musician with her group Red Bird Giving.