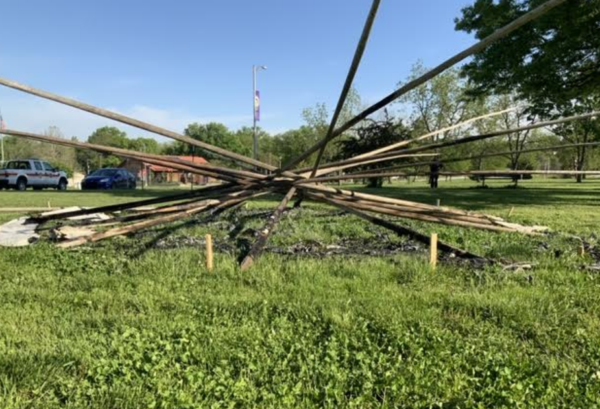 LAWRENCE, Kan. — The teepee erected to honor the spring graduates at Haskell Indian Nations University in Lawrence, Kansas was not a mere reminder of housing of our tribal ancestors. It was meant to remind graduating students that “you stand on your own,” according to Jared Nally (Miami Tribe of Oklahoma).

Early Saturday around 4:30 a.m., Lawrence-Douglas County Fire Department was called to the university campus because the teepee was on fire.

Nally, editor of the Indian Leader, Haskell’s student newspaper, spoke by telephone to Native New Online on Saturday afternoon about the fire that destroyed the teepee. Nally said the teepee was erected on Wednesday and to be taken down today.

“I feel like this is a symbol of Native resiliency. A teepee comes together with each part supporting another. I look at what remains after the fire, and even though there has been a tragedy, you still see the poles supporting one another,” Nally said.

The Indian Leader posted the following on its Facebook page: “Following the suppression of the flames, a member of the Lawrence Fire Department started collecting evidence to determine the cause of the fire. Current knowledge is that no fire was lit in the (teepee), and that the ceremonial fire off to the side had already gone out.”

Later on Saturday, the Lawrence-Douglas County Fire Department released a short statement about the teepee fire: 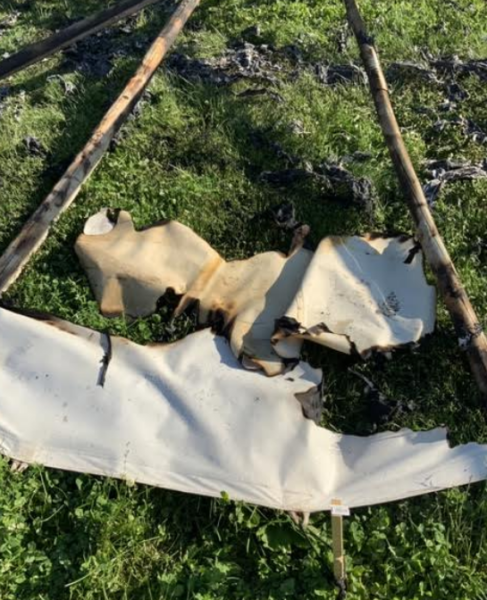 The fire was extinguished before the wooden poles burned.

“At 4:35 a.m., the Douglas County Emergency Communications Center was notified by a Haskell security guard of a teepee on fire near the intersection of Barker and Indian Avenue. Firefighters arrived at 4:42 a.m. and extinguished a small amount of fire remaining on the teepee with a fire extinguisher. The department, in coordination with other agencies, is conducting an investigation of the fire at the request of Haskell Indian Nations University.”

Nally said there was speculation that fire was an act of vandalism.

Because of the COVID-19 pandemic only about 50 students remain on campus. As with other higher education institutions, Haskell has been conducting classes online.

Instead of an in-person commencement, there was a virtual graduation ceremony held on Friday. Remarks from four people inside the teepee were livestreamed, including a prayer and a song.

Haskell Indian Nations University is a federally operated university. Haskell was originally an Indian boarding school when it was established in 1884. It now has a student population of 1,000 each semester with American Indians from over 140 enrolled.