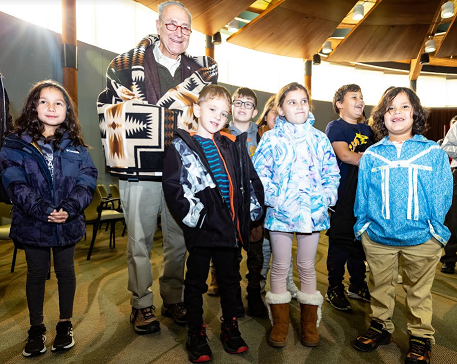 The Seneca Nation was selected to receive a federal grant of $7,625,000 through the highly competitive Rebuilding American Infrastructure with Sustainability and Equity (RAISE) program. The grant will fund the construction of the Southern Tier Regional Transit Hub, a state-of- the-art, transit facility comprised of a combined transit hub and bus storage facility on the Nation’s Cattaraugus Territory.

Operated by the Seneca Nation Department of Transportation and Seneca Transit System, the facility will increase accessibility, streamline bus services and fuel economic growth across the region.

“Access to reliable transportation is an important tool in helping to bridge socio-economic gaps that exist for many of our people, which can be particularly challenging in rural communities. Our Seneca Transit System is a vital service that connects Senecas on our Cattaraugus and Allegany Territories to healthcare, employment, commerce, recreation and other needs on our territories and within the greater region.The Sothern Tier Regional Transit Hub, funded by this RAISE grant, will be a transformational addition to that effort,” President Armstrong said. “As important, this project will serve as a gateway for improved access and connectivity throughout the region, establishing a safe, convenient and efficient link, whether people are traveling to or from Buffalo and Niagara Falls, the Chautauqua region, Cattaraugus County, or our Seneca territories.”

“For far too long our tribal communities have had to face inadequate public transit options due to a lack of federal assistance, that is why I am proud to deliver this over $7 million investment for the Seneca Nation’s Cattaraugus Territory to create a hub for transit services and build a more equitable transportation future,” Senator Schumer said. “The Seneca Nation’s families, businesses, and communities need and deserve a modern, easily accessible transit system, and this major federal investment, in tandem with our major wins from the Bipartisan Infrastructure &amp; Jobs Law for our Tribal communities will pave the way for new economic growth, reconnect residents, create good paying jobs, and drive the future of transportation for the region.”

The facility will be built on Nation-owned land near the Seneca One Stop fuel station and convenience store on Route 20 in Irving. Construction is targeted to start in 2024.