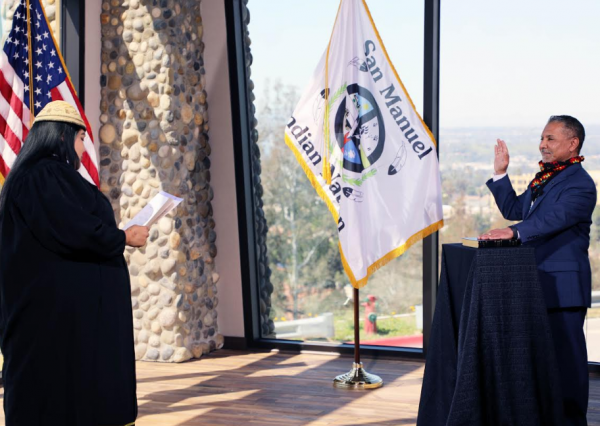 Ramirez was elected chairman after five terms as tribal secretary. He serves on the San Manuel Education Committee and actively promotes access to healthcare and education for all through his work with Loma Linda University Health and other nonprofit partners in the Inland Empire region. He also leads the operating committee for First Nations Experience (FNX), the nation’s first Native American and World Indigenous Peoples television channel.

“I am deeply humbled and honored by this opportunity to serve as chairman and give my commitment to serve diligently to enhance the rights, opportunities and expectations for all San Manuel tribal citizens, our families, and our community,” Chairman Ramirez stated. “We have the privilege of extending a positive presence throughout the region with the benefits of the Tribe’s economic impacts, our intergovernmental partnerships, and our strategic philanthropy. These are all made possible because we heed the call to Yawa’, and act on our beliefs.”

Latisha Casas was re-elected to the office of treasurer for the Tribe. As treasurer, her responsibilities include protecting the Tribe’s overall financial interests into the future and serving on the Investment Board. She was re-elected to her fourth term on the Business Committee as Treasurer after having served an initial term from 2012 – 2016. Her most recent term began in 2018. Casas has also been a member of the Investment Board since it was established in 2008.

Johnny Hernandez, Jr., was re-elected to the Business Committee as an At-Large member for a second term.  During his first term on the Business Committee, he took leadership of cultural, education and business issues for the Tribe. He was elected Chairman of the Education Committee in 2019. Hernandez played a leading role on behalf of the Tribe in founding the Cultural Awareness Working Group (CAWG) with other tribal citizens. The CAWG works to perpetuate the learning and sharing of Serrano tribal language, culture, traditions and practices among San Manuel tribal citizens, team members and the public at large.

Alexis Manzano was elected Vice Chair of the Judiciary Committee.  Ramirez acknowledged her election by stating that the Tribe welcomes her energy and commitment as she blazes new paths for the upcoming generation of San Manuel citizens. Manzano has been a member of Articles of Association Working Group since its inception helping to update the Tribe’s governing documents and advancing San Manuel’s unique form of governance through the development of tribal codes, authorities and policy frameworks.

San Manuel continues to pursue mutually beneficial relationships with other communities and jurisdictions through partnerships across its vast aboriginal lands, which encompass the majority of present-day San Bernardino County. The Tribe positively impacts the greater community through strategic philanthropy and working with nonprofit organizations and community groups that serve communities throughout the County.