Project with SRP Leaves 300 MW for Nation to Develop 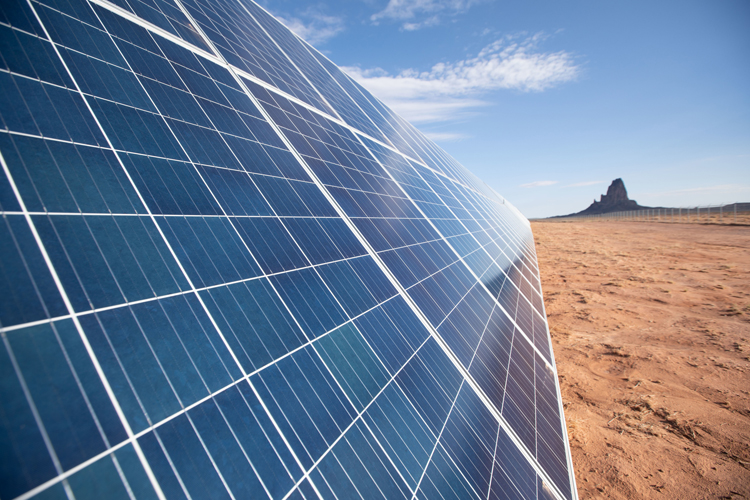 Editor's Note: This aricle was first bublished by the Navajo Times. Used with permission. All rights reserved.

WINDOW ROCK, Ariz.— In his address to the Arizona State Legislature last week in honor of Indian Nations and Tribes Legislative Day, President Jonathan Nez said that partnering with SRP on a 200-megawatt solar project is “the new vision for energy development for the Navajo people … (and) what’s good for the Navajo Nation is good for Arizona.”

“We are all going to develop a project on Navajo, a renewable energy project, a solar project that we can create 200 megawatts and bring in additional revenue,” said Nez to the Times about the partnership between SRP and the Nation. “There are folks coming to us who are pitching their projects.”

The Hayoołkaał proclamation that Nez and Vice President Myron Lizer issued last year prioritized renewable energy development. And since a Navajo Nation Energy Office has yet to be established, Nez said that his administration’s Hayoołkaał Work Group has vetted the proposals of various groups who want to utilize the 500 megawatts of electrical transmission the Nation acquired with the closing of Navajo Generating Station.

The project with SRP probably won’t be ready to go until 2023, Nez said. As for the remaining 300 megawatts, Nez said the Nation would be doing its own request for proposals, which is a big deal. Since it is a competitive market, Nez couldn’t share the list of the companies who have sent in proposals.

“The Hayoołkaał group has done some really great work,” he said. “We’ve done a lot.”

Once the Hayoolkaal group vets the proposals, the companies will have to go before Council to negotiate leases and waivers of sovereign immunity, Nez explained.

“This project is critical as it moves us forward in our goal to invest in more solar energy projects and offer our customers a diverse mix of affordable, emission-free power,” said SRP General Manager and CEO Mike Hummel. “We are also proud to work with the Navajo Nation as they facilitate further development of renewable energy.”

Michelle Henry with Division of Natural Resources, who is one of the members of the Hayoolkal work group, said it was the proclamation that “set the stage” for this eventual partnership with SRP.

“We’ve had a long relationship with the owners of Navajo Generating Station and they wanted to continue with that relationship,” said Henry. “They reached out to the Nation and that’s how the ball started rolling, and the talk about developing a 200-megawatt project began.”

Henry said DNR has received at least 20 proposals from different companies wanting to use a portion of the 500 megawatts. When vetting company proposals, the work group considers if the company is able to sustain itself, viability of the project, the reputation of the company and the returns it would give to Navajo.

Henry said they had met with SRP at least four times before they decided to partner with it on the 200 megawatts. Just recently the group met with the Resource and Development Committee to provide updates of what the group is working on, she said.

“This throws us at the forefront of renewable energy transition,” said Henry. “What President talked to the legislators about, that transition from coal to renewable. Coal hasn’t been forgotten and its still a viable source; it still generates revenue today. But we want to find that balance between renewable energy and coal.”

SRP, a community-based, not-for-profit public utility, serves more than one million customers. It is asking respondents to provide competitive solar project proposals that are a minimum of 100 megawatts and up to 200 megawatts in size. Proposed projects must be able to achieve commercial operation by no later than December of 2023 so projects may take advantage of expiring federal tax incentives.

RFPs must be submitted to SRP by May 4, 2020. Selection of new resources is expected to be completed by July 2020.

Donate
Free Newsletter
About The Author
Author: Arlyssa BecentiEmail: This email address is being protected from spambots. You need JavaScript enabled to view it.
Breaking News