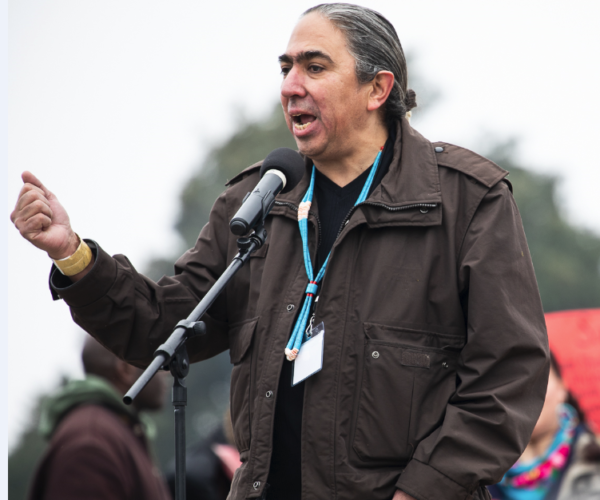 WASHINGTON — Mark Charles (Navajo), who is running for president of the United States as an independent, released the following statement on Monday regarding last Thursday evening's assassination of assassination of Iran’s General Qassem Soleimani, ordered by President Donald Trump:

I condemn the attack on the U.S. Embassy in Baghdad that resulted in the death of a US contractor. I also condemn the impulsive response by the Trump administration of assassinating top Iranian General Qassem Soleimani. And I reject the statement issued claiming that our actions were defensive and meant to de-escalate the situation.

The cultures, people and civilizations of the Middle East are centuries, even millennia old, and their ties to the land are even older. Their conflicts are exacerbated by shame, and their peace is negotiated and kept in part through honor. So when a nation a mere two and a half centuries old, whose culture is based on neither honor nor shame and whose society is dominated by consumerism; a nation who colonized and ethnically cleansed the lands they now occupy but has never been held accountable nor expressed any shame for its actions. When that nation claims moral superiority over civilizations more than ten times their senior, there is indignation. And when that nation lords their military might, there is resistance. And when that nation attempts regime change, there is terrorism. And when that nation turns to terror and war crimes itself though torture, drone strikes, assassinations and threats to destroy historic and cultural landmarks (sacred sites), many may feel that there is only one response remaining.

Iranian Quds Force commander Gen. Qassim Soleimani, seen in September,
was killed Friday in a strike on the international airport in Baghdad.

When President Trump publicly threatened (on Twitter) the historic and cultural sacred sites of Iran as military targets, he not only spoke like a war criminal, but he spoke like a person who has no relatives - no kinship, no ties to the sacredness of land nor to the story of any people.

When you have no relatives, not only do you have no honor, but you have no ability to feel shame. And I fear that Iran may feel that the only remaining response they have to such a president, and a nation, is war.

To be clear, the assassination of General Qassem Soleimani was not defensive nor was it an act of de-escalation, and for the Trump Administration to claim otherwise is either a blatant lie or unimaginable naiveté.

Watch Mark Charles response to the assassination of Iran Gen. Qassim Soleimani that he released on Saturday:

The assassination of Qassem Soleimani is not the first time a United States President has escalated tensions to the brink of war in the Middle East in a vain effort to shore up political support and distract from political tensions at home. Presidents Clinton, Bush and Obama all benefited politically from their willingness to engage militarily in the Middle East. And, if nothing changes, President Trump will not be the last.

The United States of America needs an honest national dialogue regarding our own history. A conversation on par with the truth and reconciliation commissions that took place in South Africa, Rwanda and Canada. Because reconciliation implies a previous harmony, I would call ours Truth and Conciliation. And it is becoming glaringly obvious that we need one sooner rather than later. Not just for our own sake, but for the sake of the entire global community