WASHINGTON — Olympic Gold Medalist and Running Strong for American Indian Youth National spokesperson Billy Mills delivered 2,027 signatures to the U.S. Senate on Tuesday asking for the 2020 Census deadline to be reinstated to Oct. 31. 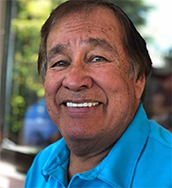 On Aug. 3, the U.S. Census Bureau announced it would slash one month off the counting of the nation’s hard-to-count (HTC) tracts, which the bureau refers to as being in remote or difficult areas. The U.S. Census Bureau cited costs and logistical difficulty due to the coronavirus pandemic as its reasoning to slash one month off the enumerating process.

Related: Census Bureau Slashing a Month Off Counting is a Critical, Damaging Blow to Indian Country

“The Census is one of the most valuable tools for change and representation in Indian Country,” Mills (Oglala Lakota) said. “Our Native American communities deserve to be counted and heard.”

The fight to extend the deadline to the end of October instead of September is in the U.S. District Court for the Northern District of California, after a lawsuit was filed last month by several city and county governments and joined by the Navajo Nation and the Gila River Indian Community. The lawsuit claims that ending the Census count one month early threatens to cause a significant undercount of “hard-to-count” populations that include American Indians and Alaska Natives.

On Sept. 5, U.S. District Judge Lucy Koh in the Northern District of California issued a temporary restraining order for the government to halt the Census Bureau from winding down its efforts. A hearing is set for Sept. 17 to determine whether counting will continue through the end of October.

The Native Voices Network projects that the early deadline could mean up to $1 billion in lost federal funding for Indian Country annually, as well as even more losses due to non-federal grants and other programming opportunities that rely on Census data to determine funding levels.

Sacred Pipe Resource Center is a program partner of Running Strong for American Indian Youth and one of the many nonprofit organizations involved in grassroots tribal community counting efforts. “We are able to provide information, however, in preparation for self-response events later this summer. Despite [COVID-19http://www.indianyouth.org/">www.indianyouth.org.