WINDOW ROCK, Ariz. — Navajo Nation President Jonathan Nez may be under quarantine at home because he came in contact with someone who was COVID-19 positive, but he sure is in touch with outside the Navajo Indian Reservation. On Tuesday, Nez received a telephone call from New York Gov. Andrew Cuomo, who called to offer support to the Navajo Nation’s response to the COVID-19 pandemic.

The two leaders have something in common. They are overseeing the COVID-19 pandemic in two of the hottest coronavirus spots in the United States.

New York has the most confirmed cases of the deadly virus in the country. Though not a state, the Navajo Nation, which is located on the country’s largest Indian reservation, ranks number three behind New York and New Jersey in per capita cases of confirmed coronavirus.

Cuomo, who has gained a lot of national attention during the pandemic because of his daily briefings, has spoken brazenly about how New Yorkers help others in need and that he would assist other states. Late last week, he offered ventilators to other states, such as Michigan. One hundred ventilators arrived from New York in Lansing, Michigan on Monday.

On Tuesday, he offered President Nez assistance to the Navajo Nation. 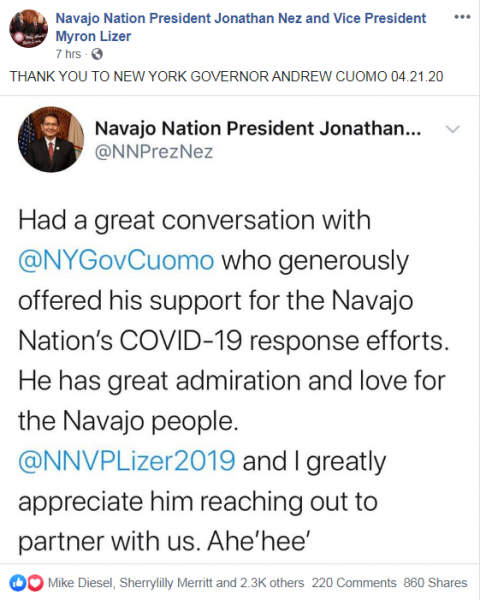 “Had a great conversation with @NYGovCuomo who generously offered his support for the Navajo Nation’s COVID-19 response efforts. He has great admiration and love for the Navajo people.

@NNVPLizer2019 and I greatly appreciate him reaching out to partner with us. Ahe’hee’”

Cuomo is no stranger to Indian Country. While serving as the Secretary of Housing and Urban Development, in July 1999, he joined then President Bill Clinton on a visit to the Pine Ridge Indian Reservation in South Dakota, the country’s second largest reservation. As the result of the visit where they visited a five bedroom house on the reservation that was home to 28 people, Cuomo helped to establish the HUD-Section 184 mortgage loan program.