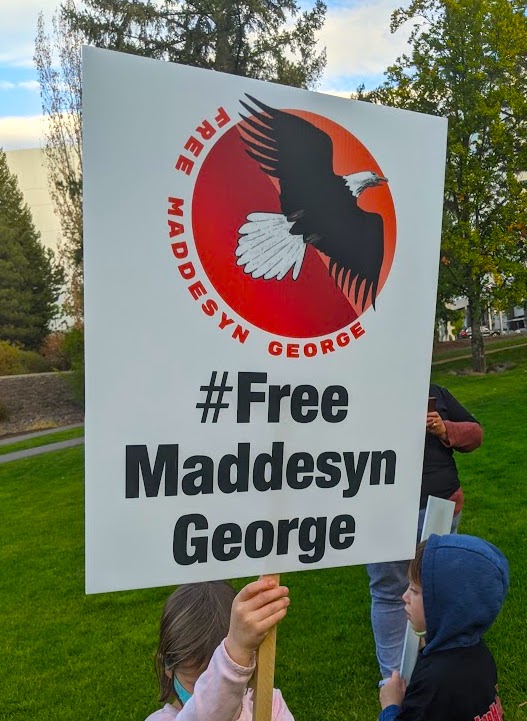 A member of the Colville Tribes has been the center of a controversial criminal court case that has many questioning who is protected when claiming self-defense.

Maddesyn George, 27, pleaded guilty last month in federal court for voluntary manslaughter and intent to distribute methamphetamine. George was initially charged with second degree murder, assault with a dangerous weapon, and using a firearm in the commission of a crime of violence. She had told police she shot and killed her rapist, Kristopher Graber, 43, in self-defense in the summer of 2020 on the Colville Indian Reservation.

She was not offered nor given a rape exam, according to her defense team.

She told police that she took his handgun to protect herself, so that he wouldn’t be able to harm her with it again. George is a Colville tribal member and lives on Washington’s Colville Indian Reservation. Graber is a white man and lived in Omak, Washington, about 45 miles northwest of the reservation.

On July 6, 2021, prosecutors filed a motion to prevent George and her attorney, Stephen Graham, from including the sexual assault or a theory of self-defense in his opening statement. The court sided with the prosecution.

Because Washington is a non-mandatory Public Law 280 (PL280) state, the federal government has jurisdiction on major crimes such as murder, kidnapping, and drug trafficking on Indian land such as reservations, regardless if the people involved are enrolled in a tribe. In mandatory PL280 states, the state has jurisdiction of all felony crimes and some misdemeanor crimes involving members of tribes.

George faces up to 17 years in federal prison. Because she plead guilty, she is unable to appeal her conviction or seek post-conviction relief.

The question ultimately at hand is whether a rape survivor has the right to argue fear for her life and self-defense.

“Even though Maddesyn accepted a plea deal several months ago, we have been fighting for the charges against her to be dropped,” said a spokesperson for Maddesyn George's Defense Committee to Native News Online. “Maddesyn pled guilty to voluntary manslaughter under the duress of pretrial incarceration and the threat of a murder charge. We contend that she should never have been prosecuted in the first place, because her actions were clearly within our understanding of the right to self-defense. Although it's rare for a prosecutor to vacate charges at this stage, it's certainly possible.”

Federal prosecutors allege she stole drugs, cash and a gun from Kristopher Graber, 43, and then shot and killed him with his gun when he came to retrieve his property. Her defense has said that because George feared the possibility of a total 43 years in prison if convicted in federal court, George pleaded guilty to possession with intent to distribute 5 grams or more of methamphetamine and voluntary manslaughter in Indian country.

George’s family, and others, claim the federal government “threw the book” at her because she is an American Indian and a woman, while her victim is a white man. Last month, they held a rally outside the Thomas S. Foley United States Courthouse to raise awareness of her case.

Both George and Graber have lengthy criminal records related to drug behaviors, behaviors that often discredit a witness in a criminal trial or among police. A person’s past record also makes a person less credible to law enforcement, whether they are the victim or perpetrator.

Organizers have created a petition on change.org demanding that Maddesyn’s charges be dropped. To date the petition has gained more than 8,000 signatures.

Maddesyn's attorney recently filed letters to the court regarding the case from the National Indigenous Women's Resource Center, the Sovereign Bodies Institute, the statewide domestic violence and sexual assault coalitions in Washington, the YWCA branch in Spokane where the U.S. Attorney's Office is based, and scholars of sexual and domestic violence.

“We hope Alison Gregoire, Richard Barker, and U.S. Attorney Vanessa Waldref will listen to these expert voices and be compelled to change course before next week,” said Maddesyn’s Defense Team to Native News Online. In court documents, prosecutors are recommending a sentence of 17 years in prison. The sentencing guideline for the charges is nine to 11 years. The prosecution argued that, by taking Graber’s drugs, George was engaged in drug trafficking.

At the time of publication, the U.S. attorney’s office has not responded to a request for comment from Native News Online.