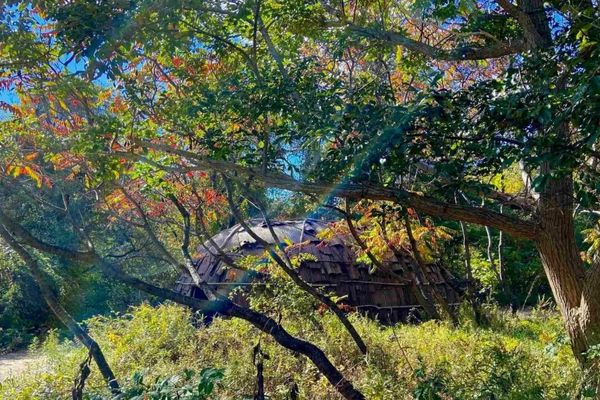 Mashpee Wampanoag Tribal Chairman Brian Weeden, 30, is facing criminal charges for allegedly breaking and entering a local museum and stealing four Wampanoag cultural items on November 7, according to the criminal complaint filed by the Plymouth Police Department in the Plymouth District Court and obtained by Native News Online.

The cultural items, valued at $10,000, have since been returned to the Plimoth Patuxet Museums.

The police report, dated November 9, 2022, says the items were stolen from the “Native American exhibit” at the Plimoth Patuxet Museums at approximately 2 a.m. on Monday, November 7.

The stolen items included two bulrush mats and two black bear skin rugs, taken from inside a “wetu” – a traditional oval shaped hut used historically by the Wampanoag. The bulrush mats were reproductions handwoven by a Native artist and former museum employee, Plimoth Patuxet Museums spokesperson Rob Kluin told Native News Online. The two bearskin rugs were purchased by the museum, Kluin said, though he wasn’t sure from whom they were purchased, or if they would constitute as a historical cultural item.

Museum staff noticed the items were missing the morning after the incident, but “they were unsure if the items had been removed by another staff member for a repair.” Once staff confirmed that no employee had taken the items, museum staff called the police and reviewed surveillance footage. In addition to local police, special detective Michael Weber was also called to the scene.

The museum’s surveillance footage captured a dark SUV pulling into the museum parking lot, and three people exiting the car—two men and a woman. A fourth man remained in the car for the 18 minutes it took to secure the four stolen items, Detective Weber noted in his follow up report. Police identified another passenger as Mashpee citizen Phillip Hicks Jr, who also faces criminal charges for breaking and entering, and larceny over $1,200.

A Patuxet Museum staff member, a police officer, and a special detective all identified Brian Weeden as the driver of the vehicle.. The same museum staff member also told police that Weeden, one of the youngest elected tribal chairman in Indian Country, used to work for the museum. Police also matched Weeden’s license plate registration with photos of his vehicle going north over a nearby bridge leading to the museum at 1:47 am, and then going south over that same bridge around 3:30 am.

Hicks and Weeden are scheduled for arraignment at Plymouth District Court on Jan. 5, 2023 at 8:30 a.m., according to court documents.

The Wampanoag people and the Plimoth Patuxet Museums have a longstanding relationship that dates back four decades. A museum employee told police that “there has been an ongoing problem between the tribe and the museum, regarding the hiring of more Native Americans,” according to the report.

The museum was incorporated in 1947 as "a memorial to the Pilgrim Fathers" and for the "historical education of the public with respect to the struggles of the early settlers, the expansion of the settlement and the influence of the Pilgrim Fathers throughout the world,” its website reads. In the 1970s, museum staff began hiring local Wampanoag scholars to build up the Wampanoag Indigenous program to offer a “​​bicultural historical perspective.” Brian Weeden (Photo:Mashpee Wampanoag Website) But in July 2022, local tribal members boycotted the museum for slowly disassembling its commitment to an accurate historical telling. Former museum employees and tribal members told local media at the time that the museum was underfunding the Native portion of its exhibit, letting go of longtime Wampanoag staff, and even swapping out the word ‘Wampanoag’ for much of its programming in favor of a more general ‘Indigenous’ description.

“Work done over four decades by dedicated Wampanoag scholars and crafts people to build the Wampanoag Indigenous program from a small exhibit with one wetu in the 1970s to a fully functioning homesite with several framed and completed dwellings, gardens, and interpretive activity sites where visitors learned about everything from cooking nasaump to burning out a dugout canoe has been slowly and systematically dismantled over the last decade,” a former museum employee and Mashpee Wampanoag Tribe member Paula Peters wrote online. “Today a visitor is lucky to meet even one docent and there is a 50/50 chance that person may be indigenous from some obscure tribe outside of the region.”

According to museum spokesperson Rob Kluin, seven of the museum’s total 95 person staff are Indigenous. Of them, four are Wampanoag.

When police contacted Weeden on Nov. 10 by phone and requested he come to the Plymouth Police Station to speak about the crime, Weeden denied any knowledge of the incident, but agreed to talk with police on November 14. On Nov. 14, Weeden told Detective Weber that “he wanted to cooperate in any way he could; however he was going to seek advice from a lawyer first,” according to the police report.

Four days later, attorneys Raymond Brown and Dan Marx, representing Weeden, contacted Plymouth Police Detective Weber to ask if the items were to be returned, would charges still be taken out, according to Weber’s report.

Ten days later, Brown contacted the police to say that the stolen items would be returned by Dec. 2. “Although Weeden was working on getting the items returned, Weeden claims that he was not involved in the theft of those items.”

On Dec. 1, a Home Depot shipping box containing the stolen items arrived at the police department.

Police returned the stolen items to the museum on Thursday, December 8.

Museum Director Ivan Lipton confirmed the items were the same as those taken from the museum weeks prior, and that they appeared to be undamaged, the police report says.

Mashpee Wampanoag Tribal Council has been closed-lipped about how it will proceed governmentally.  One tribal council member, Aaron Tobey, told Native News Online that the tribe is trying to handle the matter internally.

“For that matter, we have no comment on it and refer all comments to Brian [Weeden],” Peters said.

Neither Weeden nor his attorneys responded to Native News Online’s request for comment.

This charge against Weeden marks yet another controversy involving criminal activity by the Mashpee Wampanoag Tribe’s top leadership. Former Tribal Chairman Glenn A. Marshall served almost three years in prison for a federal charge of embezzling $380,000 in tribal funds and $60,000 in illegal campaign contributions in 2009.

Weeden’s immediate predecessor, Cedric Cromwell, was sentenced last month to three years in prison for soliciting a $10,000 bribe, gym equipment, and hotel accommodations from the owner of an architecture-and-design firm in Providence, R.I. He is appealing his conviction.