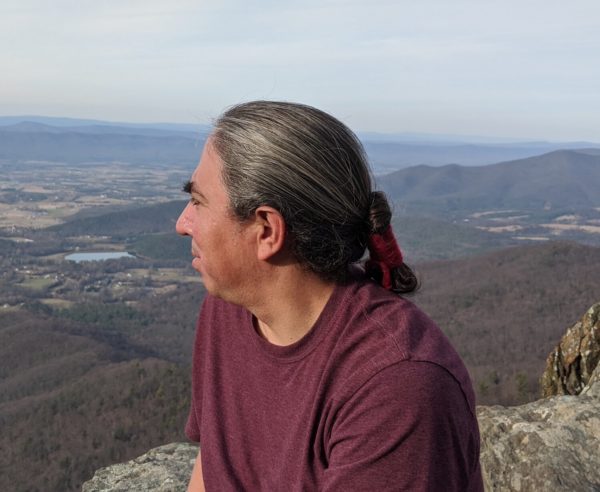 Your generosity and hard work has helped me to have integrity in following my convictions. At the start of this campaign I made a critical decision to speak first and foremost to Indian Country - the “elders in the room” of our nation. And I am honored to say that my message has been shaped and strengthened by this. My critique of our foundations has gotten sharper, and my resolve in this campaign has been made stronger.

There have also been a few unexpected (but ultimately not surprising) bumps this past year.

But I have also watched, over and over, as our people are brought to their feet when I affirm that we, Native peoples, are not helpless victims of an oppressive colonial government, but rather we are the host peoples of these lands. And the nation in which we now live is in desperate need of a host.

This campaign is about boldly challenging and changing the dehumanizing foundations of our country. The incremental steps proposed by other politicians are not sufficient. Seeing the humanity of our fellow citizens is not a progression along a spectrum for one's eventual personal growth; it is a binary decision for the immediate benefit of #AllThePeople. Treating it as a progression of growth only protects the oppressor (see the three-fifths compromise in Article I Section II of the US Constitution).

This is a bold position to take as a candidate, but I firmly believe that it is worth the risk, not only for myself, but for all the people who have been marginalized and left behind due to the racism, sexism and white supremacy embedded in our foundations. We are clearly demonstrating to the rest of the candidates and the country what kind of nation we are seeking - a nation where, for the very first time, “We the people” truly means #AllThePeople.

There are a lot of bystanders. Many people are cautiously watching my campaign from the sidelines. I regularly receive messages from people stating that if and when their candidate drops out of the race, they will then support Mark Charles for President. The silver lining in these messages is that while they are uncertain if their preferred candidate will make it through the primaries, there appears to be no doubt that I will be a viable candidate throughout the entire election!

The Democrats began 2019 with the largest and most diverse pool of candidates in the history of the United States. But by their sixth debate in December they had narrowed that field down to seven candidates, six of whom are white. More than $77,000,000 has been poured into candidates who have since dropped out of the 2020 race. And we can expect even more to fall by the wayside after the first caucuses and primary. In 2016 the estimated cost of getting an independent candidate on the ballot in all 50 states was $3,000,000. Those numbers are greatly encouraging. If we can raise even just 5% of the total amount given to candidates who have already dropped out of the race, we would have more than enough to be on the ballot in all 50 states!

Currently, the Democratic candidates are in a full sprint towards Iowa and New Hampshire, and if they do not perform well there, their campaigns are essentially over. However, as an independent candidate, I do not share those same deadlines. The majority of the state signature petitions are not due until August and September of 2020, meaning that my campaign could easily continue well into the summer (and likely through November). We are not behind schedule, and my primary goal of respecting and honoring the indigenous hosts of Turtle Island by campaigning to Indian Country first is being accomplished.

The next steps of my campaign are:

#RezTheVote - The week before the Iowa caucuses and two weeks before the New Hampshire primary, we will begin collecting signatures on Native nations, reservations and in urban Native community centers in several states throughout the country. Giving the Indigenous hosts of Turtle Island an opportunity to speak first. And because of the numbers, there is the potential that even before the first caucus or the first primary, Native America can put my name on the ballot in several states throughout the country.

#AllThePeople - Beginning in January my campaign will broaden our outreach and message to communities of color and other marginalized voices throughout the country. I’m calling on people to remember the moment when they realized for the first time that “We the People” did not include them (or those that they cared for). This campaign has always been about changing the paradigm of the nation so that “We the People” can truly mean #AllThePeople.

Our campaign is unprecedented. No other presidential candidate has ever bucked the system in this way and began their campaign by speaking first and foremost to the Indigenous hosts of Turtle Island. This critical decision may have cost me some news coverage, some publicity, and even some initial fundraising dollars. But it has shaped my message, sharpened my critique, and strengthened my resolve.

To read more about his campaign, please visit MarkCharles2020.com

Mark Charles (Navajo) is running as an Independent for president of the United States. Charles lives in Washington, D.C. with his family.