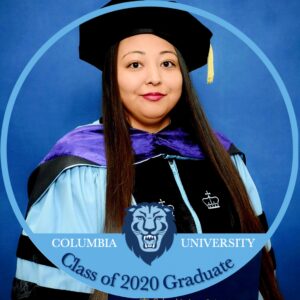 Mari Hulbutta, a star student and Citizen of the Chickasaw Nation of Oklahoma, graduated May 20 from Columbia Law School. Hulbutta grew up in a suburb just north of Oklahoma City, and has known for years she was destined for a career in law. “I always knew law was in the backdrop,” she said in a video interview on Columbia Law School’s website. “I became aware of this idea throughout Indian country of a ‘briefcase warrior,’ which is the modern-day warrior that a lot of Native people pursue whenever they pursue a career in law.”

In 2013, as an undergrad, she was awarded the UDALL Congressional Award for Native American students. The award gave her the opportunity to meet with Native People who held positions of power, governing the relationships with the federal government and tribes. Through this opportunity she met former Chickasaw Nation Lt. Gov. Jefferson Keel and Assistant Chief of the Seminole Nation Lewis J. Johnson.

During Hulbutta’s time in Columbia, she was closely engaged with the Native American Law Student Association, serving as its president. According to the Chickasaw Times, in March 2019, she guided a group of classmates through a week of service and cultural awareness in Chickasaw Country.

In her Chickasaw Times interview, Hulbutta said, “It’s been a real treat to be able to bring students from across the United State and even from around the world to the Chickasaw Nation.”

Hulbutta also worked alongside Bernard Harcourt, a Columbia Law professor of political science, on research surrounding the Standing Rock protests. Through that, she helped draft briefs on behalf of Native Americans and non-Natives who were impacted by unconstitutional actions.