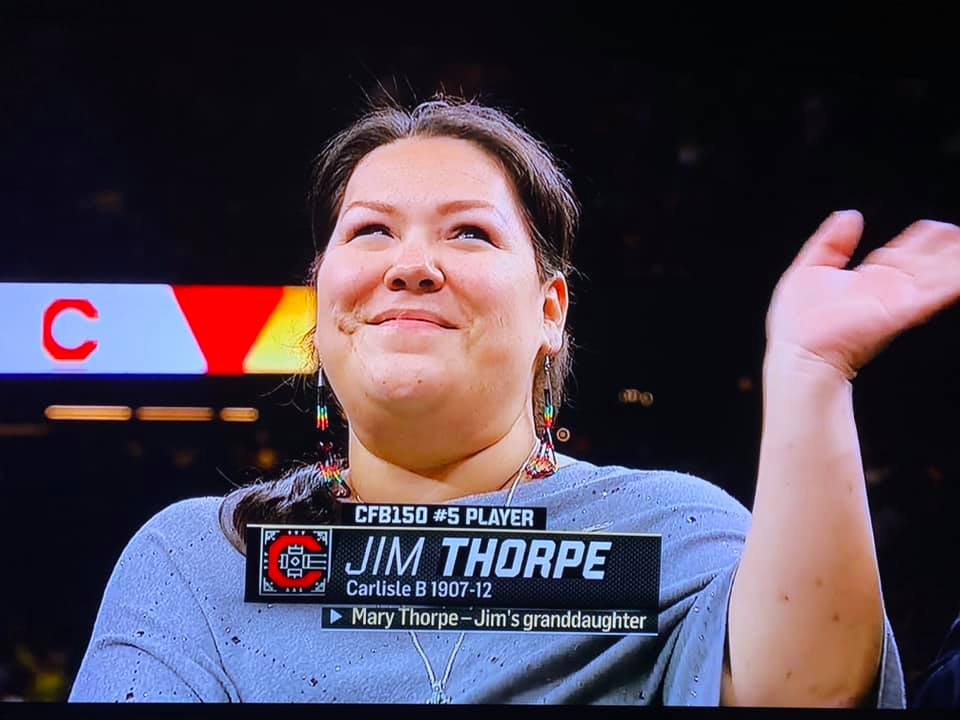 Thorpe (Sac & Fox/Potawatomi) was named No. 5 on the list of the 150 Greatest Players in College Football’s 150 Year History. The list was curated by ESPN as part of the 150th anniversary of college football in the United States.

Jim Thorpe ran for 3,616 rushing yards as a halfback for Carlisle.

Calling him “as great an all-around athlete as sports have ever seen,” ESPN announcer Rece Davis introduced Thorpe’s granddaughter, Mary Thorpe, as she stood alongside college football legends Jim Brown, Archie Griffin, Earl Campbell, Herschel Walker and other legends of the gridiron.

An Oklahoma native, Jim Thorpe rushed for 3,616 yards and earned All American honors twice  as a running back for Carlisle Indian Industrial School in Carlisle, Penn.

Thorpe went on to participate in the 1912 Olympic Games for the United States of America, 14 years before American Indians were recognized as citizens of the country. Thorpe won the gold medal in both the decathlon and pentathlon events at the Stockholm Olympics, but was stripped of his medals when a reporter revealed he had played semi-professional baseball. It was not until after his death that Thorpe’s amateur status was restored, and his name reentered in the Olympic record book.

Thorpe went onto play professional baseball for the-then New York Giants between 1913-1919 and later played professional football for six teams in the National Football League. The Pro Football Hall of Fame inducted Thorpe as part of its inaugural class in 1963.

Monday night’s honor was part of ESPN and its College Football 150 initiative to celebrate the 150th season of football. The rankings were the results of a poll voted by a group of former coaches, players, administrators and media. The top 11 players honored last night were: