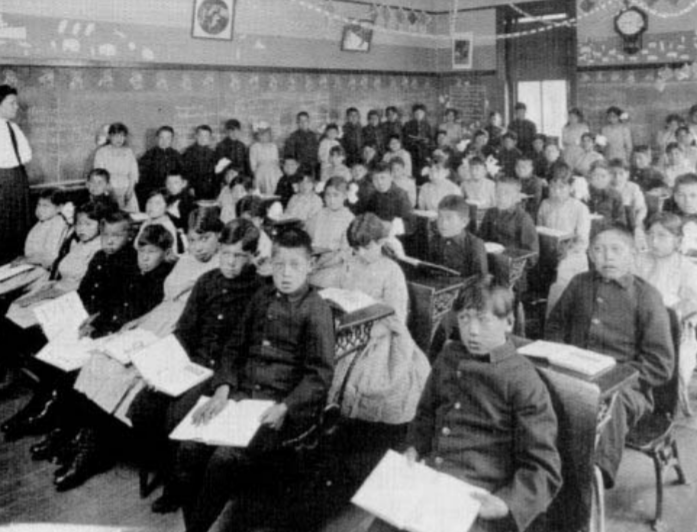 WASHINGTON — The Indian boarding school policy, where Native children were taken from their familial homes against the will of their parents, with the “kill the Indian, save the man” mantra, is a dark part of American history.

On Tuesday, U.S. Rep. Deb Haaland (D-N.M.) and U.S. Sen. Elizabeth Warren introduced legislation that seeks healing for stolen Native children and their communities. The Truth and Healing Commission on Indian Boarding School Policy in the United States Act would establish the first formal commission in United States history to investigate, document, and acknowledge past injustices of the federal government's cultural genocide and assimilation practices through its Indian Boarding School Policy.

The commission would also develop recommendations for Congress to aid in healing of the historical and intergenerational trauma passed down in Native American families and communities and provide a forum for victims to speak about personal experiences tied to these human rights violations.

"Native people are resilient and strong, but the painful and traumatic history of genocide and forced assimilation by the federal government lives on in our communities, and our people have never been able to fully heal. I know not many people are aware of the history of Indian boarding schools, and I know it's not taught in schools -- but our country must do better to acknowledge our real history and push for truth and reconciliation. The commission that U.S. Senator Warren and my colleagues want to create will be the first step to the healing that Native communities desperately need," Rep. Deb Haaland said.

"The Indian Boarding School Policy is a stain in America's history, and it's long overdue that justice is sought for victims of this policy who suffered unimaginable harm and thousands of Native families who remain impacted by this policy. This is why I'm joining Congresswoman Deb Haaland in introducing legislation to formally investigate the past wrongs of the federal government's practices of cultural genocide and assimilation and to respond to ongoing historical and intergenerational trauma devastating tribal communities today," Sen. Warren said.

The bill has the support of tribal leaders who see the ramifications of the trauma associated with Indian families being separated.

"The Boarding School Era remains one of the darkest chapters in our collective history as Pueblo Nations. Our communities continue to experience the legacy impacts of historical and intergenerational trauma resulting from the forced removal, assimilation, and attempted cultural genocide of our communities and nations. We thank Rep. Haaland and Sen. Warren for their leadership in holding accountable the United States to address these injustices by developing meaningful healing paradigms and systems in consultation with Tribes across sectors."  Chairman J. Michael Chavarria, All Pueblo Council of Governors, commented.

"The Indian Boarding School policies of the United States government are the primary source of the intergenerational trauma that haunts Our People to this day. As a Native American Vocational Rehabilitation Program Director, I deal with this daily - not only from my own immediate family, but also participants of my program from my tribe and other Native Tribes from all over the United States that relocated to the Las Vegas Metropolitan Area and throughout Clark County, Nev. It's about time we break this cycle!" Ashly M. Osborne, Moapa Band of Paiutes Tribal Secretary, Moapa Band of Paiutes, said.

"A Truth and Healing Commission on Indian Boarding Schools is long overdue in the U.S. The consequences of continuing to ignore the ongoing impacts of this genocidal federal policy are being played out at this very moment in our country. There can be no change for the future without acknowledgement of the past and there can be no racial equity for all if the conversation doesn't start with the first nations of these lands. The National Native American Boarding School Healing Coalition fully supports this important bill to understand and address this dark part of American history, Christine Diindiisi McCleave (Turtle Mountain Ojibwe Nation), CEO of the National Native American Boarding School Healing Coalition said.

"The Association on American Indian Affairs strongly supports truth and reconciliation for the survivors of U.S. boarding schools, which includes the generations of relatives of those survivors. Recognition that the U.S. boarding school policy was genocide targeted to forcibly remove our children in order to diminish our strength and take our lands and resources. The horrendous statistics in Indian Country today are the direct result of this genocide," Shannon O'Loughlin, executive director and attorney, Association on American Indian Affairs, said.

"The United States attempted deliberate eradication of Native American culture and forced assimilation through their boarding school policies. The Truth and Healing Commission on Indian Boarding School Policy will explore, document, and acknowledge the past wrongs of the Federal government in order to aid the healing of intergenerational trauma passed down in Native American families and communities. We thank Rep. Haaland and Sen. Warren for their bi-cameral leadership on this critical issue,” Kevin J. Allis (Potawatomi), chief executive officer, National Congress of American Indians (NCAI)