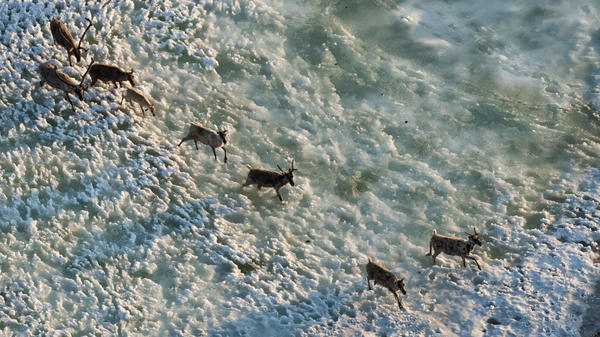 FAIRBANKS, Alaska — It took two years, but the outcome was good news for the Gwich’in Nation of Alaska and Canada:  JPMorgan Chase, the largest bank in the United States, has decided to stop financing oil and gas drilling on sacred lands in the Arctic National Wildlife Refuge.

For two years, representatives of the Gwich’in Steering Committee have met with Chase officials to urge them not to support the destruction of the Arctic Refuge’s coastal plain.

The Gwich’in Nation view the land along the coastal plane as sacred and critical to their food security.

“We’re thankful that the largest bank in the country recognizes that the Arctic Refuge is no place for drilling,” said Bernadette Demientieff, executive director of the Gwich’in Steering Committee. “Disturbing these lands would devastate the Porcupine Caribou Herd and our people’s way of life. We hope that other banks and oil companies take note that our human rights and the health of our people will not be dismissed. We demand the protection of our homelands and will continue to stand in solidarity for our ways of life as the Gwich’in have done forever.”

Chase’s new policy rules out financing oil drilling in the Arctic, as well as new thermal coal mines and coal-fired power projects worldwide. Monday’s announcement follows the release of a similar policy update by Goldman Sachs, as well as more than a dozen global banks.

“It’s amazing that these banks have listened and understood us, because they have an important role in safeguarding the future for all of us,” said Demientieff. “The fight is far from over and we will continue to hold those accountable who seek to destroy our homelands.”