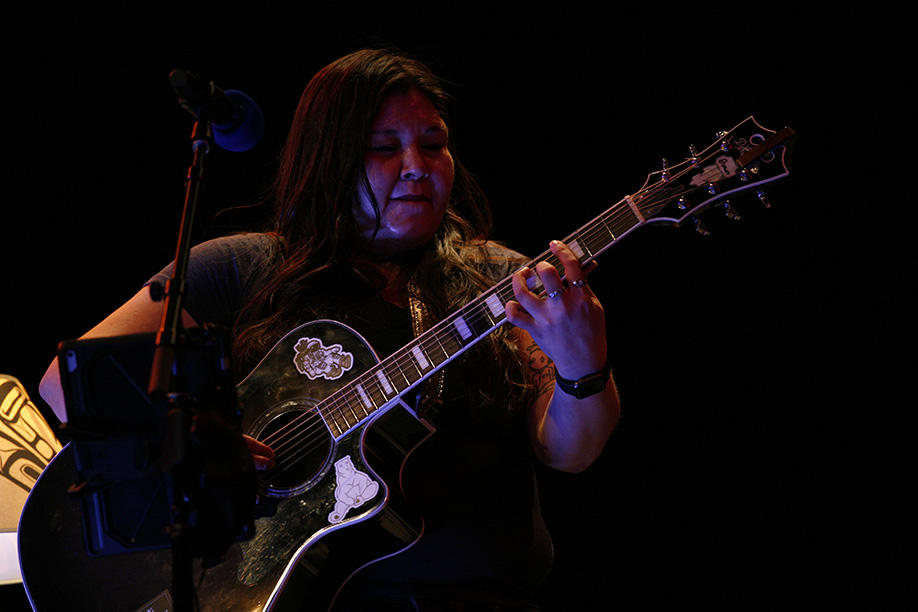 This story was originally published by KNBA on November 12, 2021. Read the original story at KNBA. Republished by Native News Online with permission.

The first international Indigenous musical festival -- Rock Aak’w showcased several Native artists. For several artists, this was their first time on the mainstage of a festival.

Rock Aak’w brought musicians from around the world in a virtual celebration of music, Indigenous values and family. It felt like a family reunion as relatives came together to share a range of musical styles like blues, jazz, folk, and more.

Singer-and-songwriter Nicole Church is Łingit and has performed a number of local shows in Juneau.

“It feels like being connected to our, reconnecting with our cousins that we never met. That's exactly how I feel. And this part's going to make me emotional because when I connect, when I'm surrounded by Native people, I just feel so safe. And so free, it's like a weight off my shoulders because … I can just be myself.”

Church said the festival is “history in the making.”

“These young kids, these young Indigenous kids need to see themselves represented. … It means that much more for us to be able to have a platform where we can, we can express ourselves in our own authentic way.”

The two-day festival was virtual, streamed each night for an audience that could pay what they wanted for tickets, though the suggested donation was $100.

Festival organizers originally  planned to hold the festival in person. They had purchased tickets for bands to come to Juneau. But the Delta variant COVID-19 changed all of that.

Organizers pivoted to virtual, and the festival instead invited the musicians to record during closed tapings each day of the festival.

One of those bands, The Native Jazz Trio, has members living all over the country.

“There's a whole festival of Indigenous people and Indigenous artists, so that's amazing. Secondly, it's like beautiful artwork too, you know? And I love the way that a lot of people combined the indigenous music with western types of music. And like myself, I do Tlingit and jazz music, and that's hopefully seamlessly, you know, fused together based on my backgrounds. And I love hearing other people and how they're taking back culture in their art form.” One of those artists blending Indigenous culture and language into Western music is Juneau born-and-raised Arias Hoyle who performs as Air Jazz. Air Jazz is a hip-hop artist who weaves Łingit with psychedelic and celestial beats.

“This is a huge deal being here in Southeast where a lot of a majority of my family comes from. And having them all together assembled with our brothers, also from the north, but we're all repping it right here in the homeland. This is exactly what we've needed for many, many years, and I really do appreciate everyone involved in getting the Southeast Alaskans some credibility and the voice that they've always needed."

In addition to performing over the weekend, Air Jazz also dropped an album during the festival. “Last Chance Chilkat” is a full-length, 12-song album. Hoyle performed “A-K-Ginseng”

“Ancestry and embracing our entire heritage, I think, is a must. If you want people to really get an understanding of everything, you come from your entire background and origin. And given that I come from a majority of Tlingit Aani. I love to put that into my hip hop music because that is both African-American and Alaskan Indigenous, and I think that is totally necessary if you want to embrace your entire identity. I'm sure all of your family and your ancestors you come from are smiling, either looking down, smiling or they're right there with you and they're flattered and got to love your family, man.”

“Fifteen years ago I would have loved to watch something like this on either online or in person.”

Youngman moved to Alaska to re-connect with Alaska Native roots and grow as a musician.

“It's been so nice to be able to travel out here to Juneau and do such an event like this, and then to be surrounded by people that I know, people that I trust and and that allows people that allows the performance to really just put it all out there and to let it all go on stage because we are surrounded by friendly faces and smiles and everybody's just there to help and everybody is there to support. And I think that is probably the most important for us because we're really putting it all out there where we're traveling.”

Performances also included appearances by Pamyua, Ya Tseen, Albino Mbie and others.