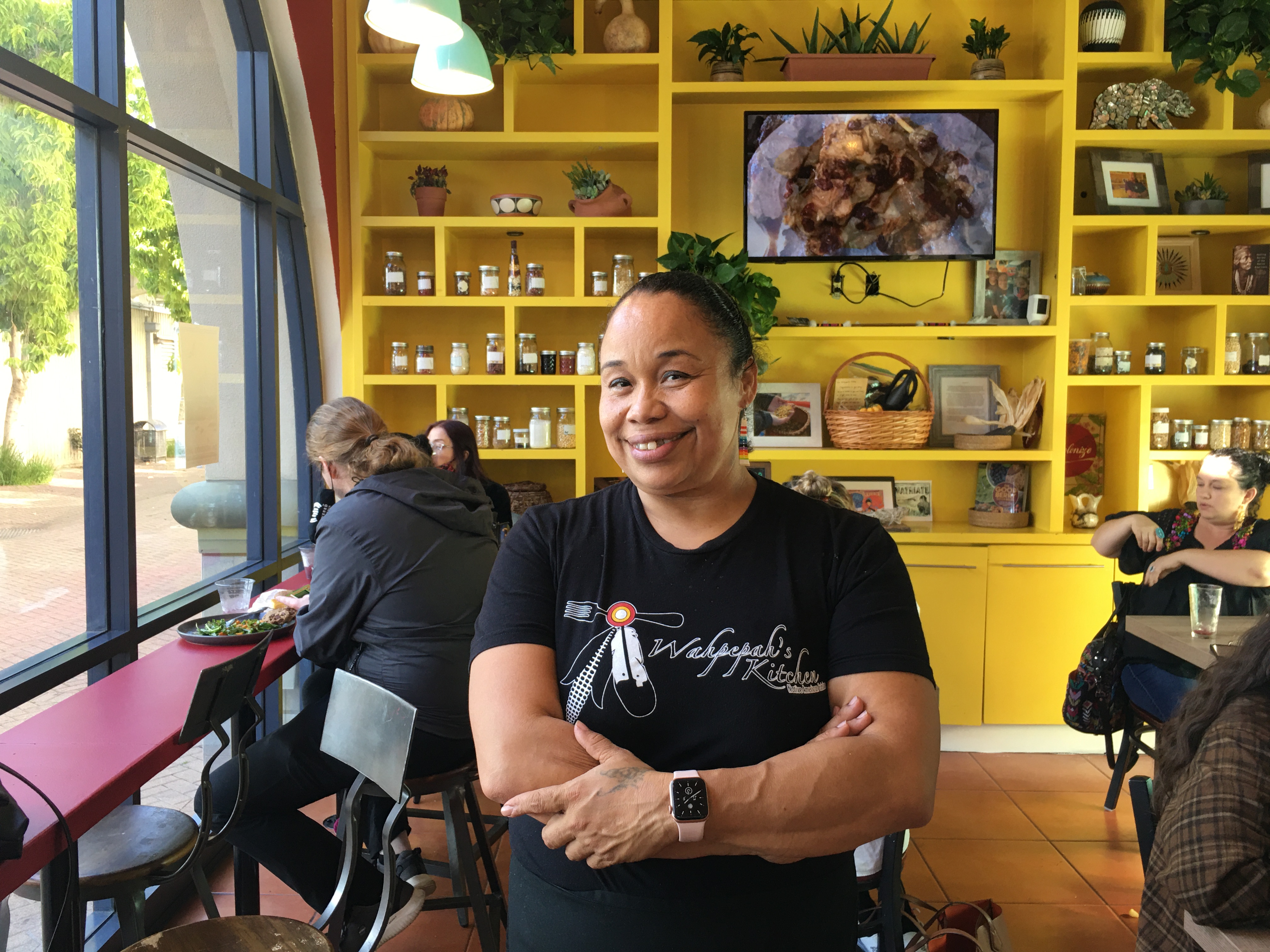 OAKLAND, Calif. — On an unusually warm and sunny November day, between 300-500 diners attended the grand opening of Indigenous foods restaurant Wahpepah's Kitchen in Oakland, California. The long awaited grand opening had been anticipated for weeks and was preceded by a mainstream media coverage uplifting chef and owner Crystal Wahpepah.

Crystal Wahpepah is a native of Oakland, California. Wahpepah’s Kitchen is the first woman-owned restaurant featuring Native American cuisine in northern California, and possibly the entire state. Wahpepah is an enrolled citizen of the Kickapoo Nation of Oklahoma who grew up in East Oakland. "This neighborhood is my home. I grew up here and spent most of my time at the Intertribal Friendship House in Oakland, and opening my own restaurant has been a lifelong dream. I spent many years helping my auntie's cook for all of our tribal events at Intertribal Friendship House. That is where I first learned and loved to cook for the community," recalled Wahpepah to Native News Online.

The restaurant’s opening represents the culmination of all her hard work, dedication, and experience over the many years she has been cooking and serving Indigenous food at powwows and events throughout California and throughout Indian Country.

Wahpepah's Kitchen is located in the Fruitvale Plaza directly behind the Fruitvale BART station. The restaurant has a large, outdoor dining patio, landscaped with drought resistant plants, and the Plaza was still decorated with Dia de los Muertos marigolds and painted skulls, which created a festive mood that everyone enjoyed. The All Nations drum group played and sang, while several families of traditional American Indian dancers performed for the diners. A craft booth owned and operated by NSRGNTS--Leah "Povi" Lewis, of Laguna Pueblo, Taos, and Hopi tribes, and Votan Hernandez of Mayan and Nahua tribes--sold Indigenous hats, t-shirts, and other hand made items. All in attendance were fully masked, and staff of Wahpepah's Kitchen made sure plenty of room remained between diners both indoors and outdoors on the landscaped patio.

Many diners remembered Wahpepah's appearance several years ago as the first Native American chef to be a contestant on the popular TV cooking show "Chopped.”

"I didn't win anything, but it was tremendous exposure," laughed Wahpepah. "It was quite an experience. I was flown to New York City, and it was all so very exciting at the time. We were all treated like big stars… We are just so very blessed with all of the support from the local Native American community here in Oakland and San Francisco,” said Wahpepah.  "Everyone has given us time, effort and support,” she said.

The restaurant’s ambiance is colorful and depicts the history of the Kickapoo Nation, and Wahpepah’s commitment to Indigenous food sovereignty. Her mission statement proclaims from a large colorful chalkboard: "Wahpepah's Kitchen aims to use Indigenous knowledge and expertise to transform food systems so they honor the origins, land, and Indigenous connection to each ingredient by cultivating and sustaining connections to Indigenous farmers and land stewards. Wahpepah's Kitchen is looking to reclaim, transform, and sustain changes to the food system through utilizing an Indigenous food sovereignty model in Oakland, California and beyond.” Diners are also greeted with a traditional greeting written in chalk that says ‘hello’ in the Kickapoo language: A HO PI TI KE NO.

The restaurant colors and decor also reflect Native American themes. On one column a painted mural depicts corn reaching up into the sky and stars. On shelves painted a "squash yellow" are numerous jars holding plant seeds collected and stored for future use. There is also a brief history of the Kickapoo Nation included in one of the shelves for anyone interested in learning more about the tribe's historic facts. Diners have the opportunity to learn more about American Indian history, and thus American history if they so choose. 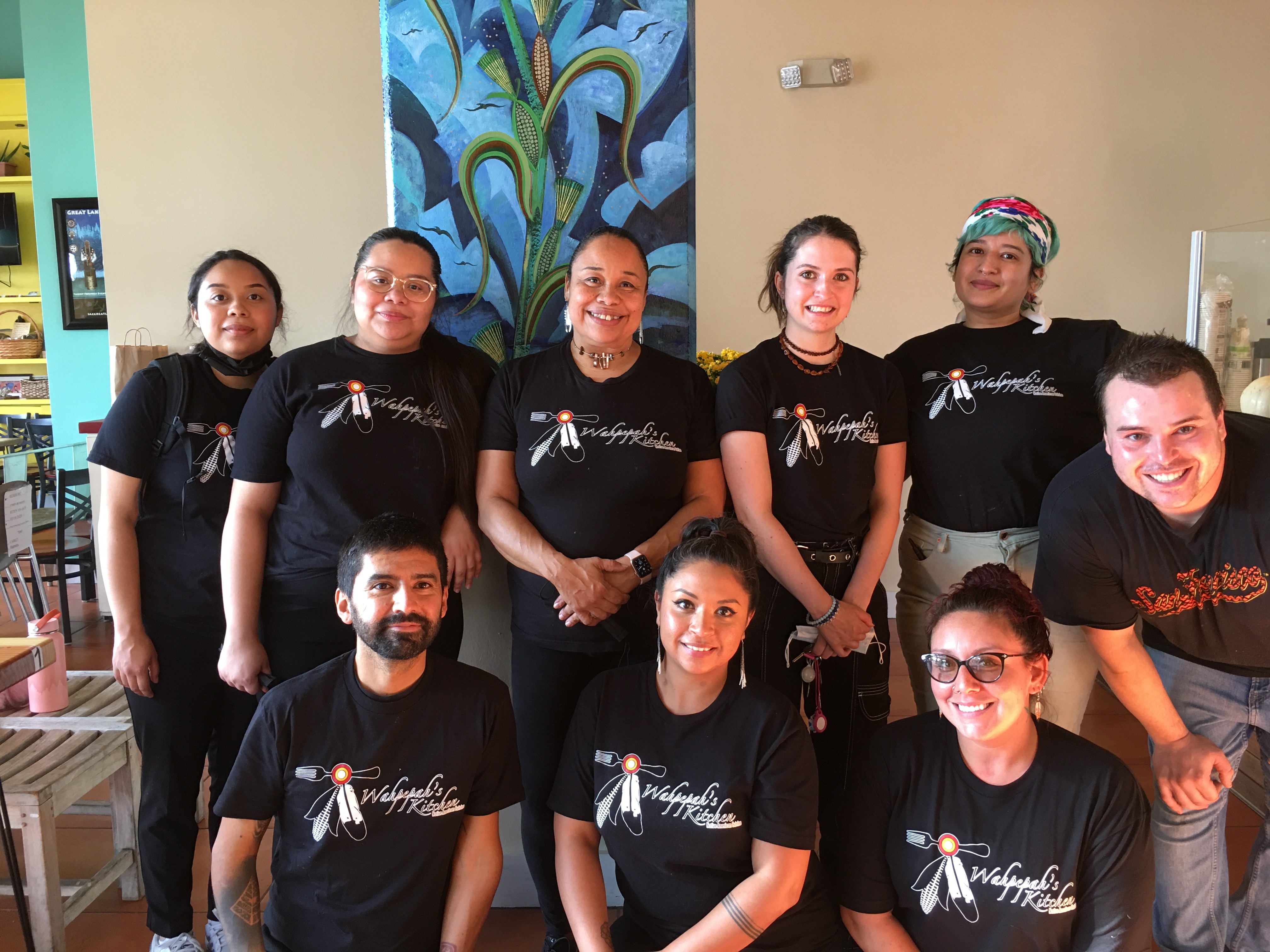 Chef Wahpepah also explained that all her food is sourced both locally and throughout Indian Country in the United States. They are receiving organic ingredients from the Cultural Conservancy--native farmer's from Novato, California. They are also collaborating with Sogorea Te and Deja Gould to feed local Native American elders, and with the Deep Medicine Circle that includes the work of Dr. Rupa Marya and Sage LaPena. Blue corn is purchased from the Ute Nation in Utah, and maple and maple syrup is purchased from the Ziimbimijwang Farm in northern Michigan. All dishes served include organic ingredients and are a combination of traditional Native American and contemporary Native American origins.

Nanette Iron Eagle Deetz (Dakota, Lakota, Cherokee and German American) holds a B.A. and M.A. from UCLA. She is a published poet whose work has appeared in numerous anthologies, most recently, Red Indian Road West; Poetry from Native California. In 2019 she was awarded a Lifetime Achievement Award from the city of Berkeley for her poetry and activism. She has published articles for Indian Country Today, Tribal Business Journal, Bon Apetit Magazine, Alameda Journal, Contra Costa Times, Mercury News, East Bay Times.