Even in Victory, It’s Time for Kansas City to Drop the “Chiefs” Name 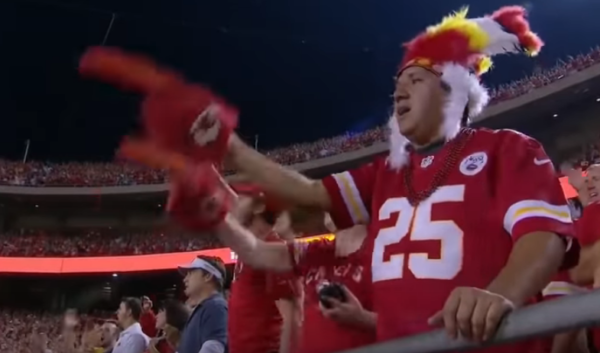 However, I am happy Super Bowl LIV is over. I’m happy we won't be subjected to anymore “tomahawk chop” chants for at least the next eight months during the off-season. Arguably, this year’s season was over the top for American Indians who oppose the usage of Indian imagery ins sports because the Kansas City Chiefs brought more than athleticism to the football field. The team brought a name that brought out the worst in the Kansas City fans who like to play Indian and real American Indians find offensive.

To be clear, the word “chiefs” by itself is not offensive.

It is the disgusting antics that come with the use of the word that cause angst among American Indians. These antics include fans painting their faces red and donning turkey-feathered headdresses.

They include the “tomahawk chop” with chants that bear absolutely no relevancy to being American Indian, but rather perpetuate the myth American Indians are always on the warpath.

They include watching the game day rituals of non-Natives banging a large drum with not consideration that American Indians traditionalists consider Native drums sacred. They include a Kansas City Chiefs cheerleader riding the horse named Warpaint around the stadium field in a pre-game and after each Chiefs score that are offensive because once again suggests American Indians are violent.

The name lends to other outrageous zeal such as when a Sonic restaurant employee over six years ago put up a sign in December 2013 in front of his outlet, as reported in Native News Online, that read: “‘KC CHIEFS’ WILL SCALP THE REDSKINS FEED THEM WHISKEY SEND – 2 – RESERVATION.” 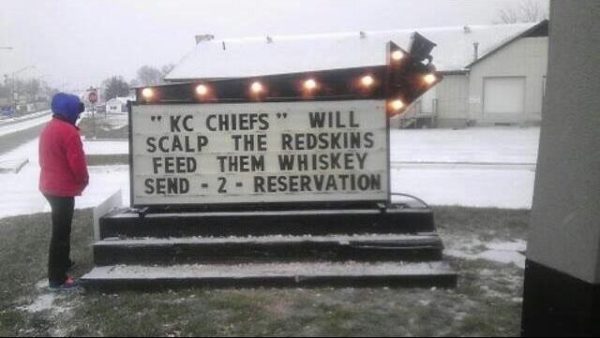 Message in front of Sonic Drive-In in Belton, Missouri in Dec. 2013. From Facebook

Whether a sports team uses American Indian imagery in its name, team logo or as a mascot, it can get messy quickly.

I am sometimes asked “aren’t there more important problems American Indians face than the mascot issue?” The questioners allude to the fact that there are unemployment rates on Indian reservations that exceed 70 percent, high rates of poverty and the highest rate of suicide among American Indian youth that are highest among all racial and ethnic groups in the United States.

My response typically includes the research findings by Dr. Stephanie Fryberg, a professor at the University of Michigan, who says the imagery of American Indians in sports contribute a negative impact on self-esteem of American Indian children.

Negative self-images hold back individuals and groups of people from success. Poor self-esteem leads to lack of trying and eventually failure. Poor self-esteem certainly can lead to suicide when combined with feelings of inadequacy, helplessness and hopelessness. So, I view the mascot issue as a significant problem that confronts Native people.

Those who nonchalantly brush off pleas by American Indians to eliminate Indian imagery in sports often argue it is an honor for Native people when a sports team takes on Indian imagery. I find no honor in seeing a bare-chested, non-Native drunk fans in the stands wearing fake headdresses. I see no honor when a face is painted inappropriately because the person doesn’t know the contextual patterns of how or why real American Indians paint their faces for ceremonial purposes. I liken this misappropriation of American Indian culture to me walking into a Catholic church and proceeding to the altar to administer holy communion. I would be asked to leave, or face being arrested.

Why is it okay then for non-Natives take on American Indian culture by attempting to take ownership of a culture that doesn’t belong to them?

As the Kansas City Chiefs savor its Super Bowl LIV victory, it is time to change its name and make millions of dollars off of new jerseys and other sports memorabilia by marketing a new name.