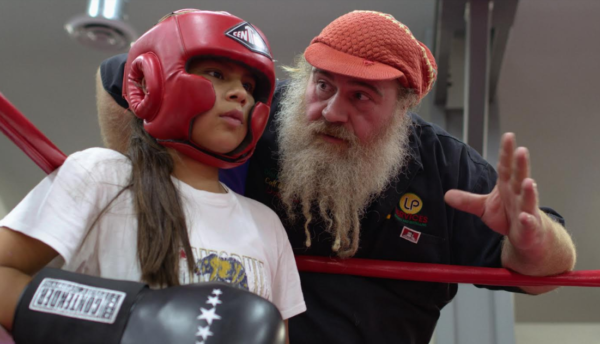 As the Blackfeet Tribal Business Council continues to take decisive action to protect the Pikunni people from the coronavirus pandemic, another existential threat to the tribe and all of Indian Country will receive international focus this week on ESPN. Blackfeet Boxing: Not Invisible directed by Kristen Lappas and Tom Rinaldi will premiere on the “worldwide leader” this Tuesday at 7:30 p.m. - EDT.

However, this isn’t a rags to riches “Cinderella Man” story, this is a story where victory is survival.

Filmed at the Blackfeet Nation Boxing Club in Browning, Montana, the 29-minute film follows the club’s owner and trainer, Frankie Kipp, as he uses boxing to empower Blackfeet women and girls in the all-too familiar struggle to avoid being the next MMIWG victim. Kipp’s club members are literally training for the fight of their lives. “If you don’t fight for your life, you won’t have a life,” Kipp said.

Under seven percent of Montana’s population is indigenous, but indigenous people comprise approximately 26 percent of the state’s missing persons. The Urban Indian Health Institute logs Montana as the state with the fifth highest incidence of MMIW cases in the US. Blackfeet Boxing: Not Invisible is framed against the backdrop of one of Indian Country’s highest-profile MMIWG cases, the disappearance of Blackfeet tribal member Ashley Loring Heavy Runner.

Ashley went missing June 12, 2017, on the Blackfeet Nation. “Unfortunately, Ashley's story is not unique, but the same as many other MMIW. Ashley had dreams and she had goals; being a Missing and Murdered Indigenous Woman was not one of them,” stated her sister, Kimberly Loring Heavy Runner, in her December 2018 testimony to the Senate Committee on Indian Affairs.

Ashley’s case is also detailed in the critically acclaimed documentary, Somebody’s Daughter, alongside other Montana MMIP victims, including Hanna Harris, after whom the state’s MMIP legislation, Hanna’s Act, is named, and Jermain Charlo. To mark the second anniversary of Jermain’s disappearance, Confederated Salish and Kootenai Tribal (CSKT) members joined non-indigenous allies in a solidarity walk on June 16 in Missoula, Montana, to recalibrate the community’s attention.

“Blackfeet Boxing: Not Invisible and Somebody’s Daughter are really complimentary pieces, that at some point in the future will likely to be screened together,” said Tom Rodgers, a Blackfeet tribal member and the President of the Global Indigenous Council. Rodgers has a producer credit on Somebody’s Daughter and was an advisor on the ESPN short.

The Blackfeet Nation was an associate producer on Somebody’s Daughter. Blackfeet Tribal Business Council chairman, Tim Davis, first approached the film’s director, Rain, to create the film that was being screened coast-to-coast and trending before the COVID-19 lockdowns.

In the film, Chairman Davis calls for a thorough investigation into the numerous inconsistencies and missteps made by law enforcement agencies since Ashley was declared a missing person. “We demand accountability and justice for the Loring family,” Davis stated. That document is close to being submitted to the respective agencies and made public.

The work of Rodgers and the Global Indigenous Council was recognized in a letter from Kimberly Loring Heavy Runner that was shared with Native News Online: “You brought more awareness to Ashley’s story and gathered leaders to listen to the truth. You helped me return home and continue my fight for my sister. You gave me hope when hope was hard to find,” she wrote.

“The impact of the billboards cannot be overstated,” said Chairman Davis. Both Montana’s senior senator, Jon Tester, and Congresswoman Deb Haaland, have been staunch supporters of the campaign.

“While the COVID-19 crisis has been raging, the tragedy of Murdered and Missing Indigenous Women and Girls hasn’t gone away, it has only left the headlines,” began Rodgers. “There’s a reason why the UN has warned of ‘a shadow pandemic,’ which is increased violence against women. With Native Women in Film and #WhyWeWearRED we produced a series of memes to remind people that ‘Traffickers don’t do social distancing’ and to ask, ‘What if she has to shelter in place with her abuser?’”

“This is not entertainment. This is life-saving work. Before the pandemic hit, we watched Native American girls and women on various teams all across the country find a way to connect their voices with Somebody’s Daughter, with the artistic mark of this film, in ways we couldn’t have predicted,” stated Chairman David Sickey of the Coushatta Tribe of Louisiana, the film’s executive producers.

“There could never be too much praise about the film,” said Chairman Sickey. Prior to coronavirus shutdowns, Somebody’s Daughter was favored for several awards and has been supported by Poet Laureate of the United States, Joy Harjo, Oscar-winner Wes Studi, Native American Rights Fund (NARF) Founder John Echohawk, and internationally renowned author and environmental protector, Winona LaDuke. Award-winning actress and director Georgina Lightning was consultant on the project. 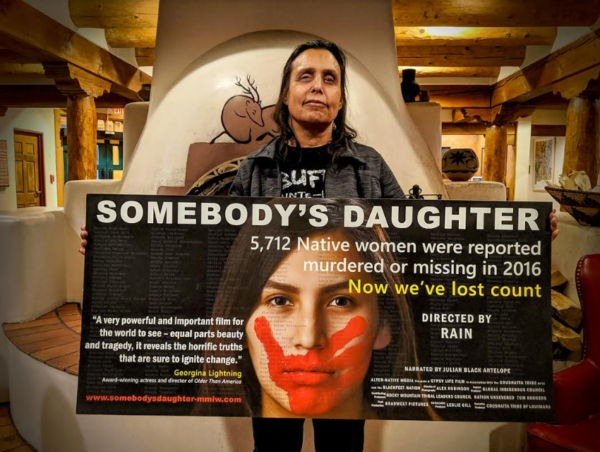 “One thing I stressed to ESPN was that their film, like ours, must lead to action,” Rodgers said. Senator Steve Daines (R-MT) was expected to introduce a version of the Reduce, Return and Recover Act advocated for in Somebody’s Daughter.

In its just-issued endorsement of Daines’ rival for the senate seat, Governor Steve Bullock (D-MT), the Rocky Mountain Tribal Leaders Council wrote, “We are confident that Governor Bullock will actively pursue the recommendations made by Montana’s tribal leaders to finally impact this tragic and disgraceful trend of MMIWG, which are presently codified in the draft Reduce, Return and Recover Act.”

Several prominent female indigenous leaders featured in Somebody’s Daughter have contributed to formulating an indigenous women and girls empowerment and self-defense program. CSKT Chairwoman, Shelly Fyant, President Rynalea Whiteman Pena of the Northern Cheyenne Nation, and Chief Judy Wilson of the Union of British Columbia Indian Chiefs are among those who have created the House of the Moon initiative “devoted to ending the MMIWG crisis, one relative at a time.”

“These are actionable achievements that reflect elements of both films,” concluded Rodgers.