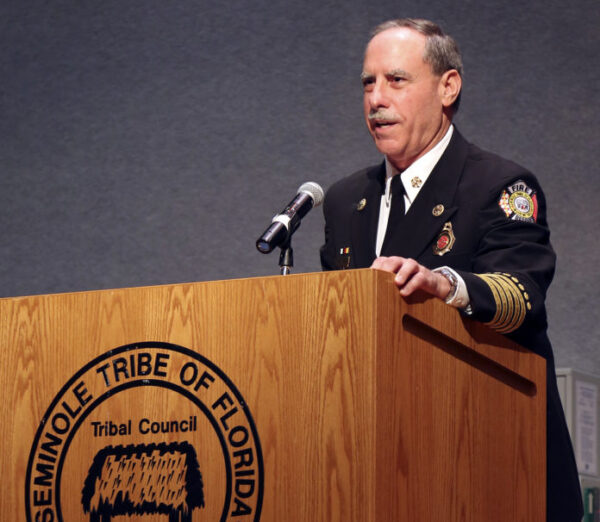 HOLLYWOOD, Fla. — The Seminole Tribe of Florida is mourning the loss of its fire department chief. Fire Chief Donald DiPetrillo died on April 30 after a battle with the COVID-19 virus. Chief DiPetrillo was 70.

According to Tampa Bay Times, “Donald, 70, had been fighting COVID-19 at the Memorial Regional Hospital in Hollywood since March 12, the tribe said. It is believed he contracted the novel virus at the “EMT Today” emergency medical services conference in Tampa in early March. Four Miami-Dade County firefighters, seven Reedy Creek firefighters and some Miami firefighters were quarantined after attending the same convention.”

DiPetrillo isn’t the first to die from COVID-19 amongst the tribe’s essential workers. Previously on April 17, the tribe’s police department lost Officer Calvin “Cal” Harrison, 78, to the deadly virus.

“Don played a major role in bringing a new level of professionalism to the Fire Department operations of Seminole Fire Rescue,” William Latchford, executive director of public safety for the Seminole Tribe of Florida, said in a news release.

“Chief DiPetrillo understood that success in life was about just being nice. If you care for people, the rest takes care of itself. His care, commitment, and leadership for over 50 years of service, helped shape the future of the fire service, not only within the Seminole Tribe, but also in the State of Florida.”

DiPetrillo was part of the 1967 graduating class from McArthur High School in Hollywood. He received his associate degree in fire science from Broward College and then graduated from Barry University with a bachelor’s in public administration. He joined the Navy in 1971 as a Yeoman 2nd Class and served on board the U.S.S. Wasp. After being honorably discharged, he became part of the United States Reserves in 1972.

At a commencement ceremony in 2016, DiPetrillo stood before seven new graduates into the Seminole Tribe of Florida Fire Rescue team and said, “It’s Seminole Fire Rescue, a family; it’s not like any other place,” The Seminole Tribune reported.

DiPetrillo once told the Miami Herald when he joined the town in 2001 “I’m planning on staying around a while, you’re not going to make massive changes in a short time. I have to learn the landscape.”

DiPetrillo, took office of a Davie department that had more than a fair share of troubles. Before he took the helm, the department had voted a no-confidence on a previous chief, and a deputy was fired following investigation of reports determined he had made racist and sexist comments to co-workers, hoping to improve the fire departments image.

At the time of his death, DiPetrillo was the president of the Fire Chiefs Association of Broward County.

On a Facebook post, the Broward Sheriff’s Office and Sheriff Gregory Tony called DiPetrillo “a true public safety icon in the South Florida fire community for nearly half a century. Chief DiPetrillo served with pride, dignity and dedication.”

DiPetrillo’s survivors include his mother, Joan, and son, Tyson, of Davie; two brothers, David and John; and Lindy Maracic, his girlfriend.